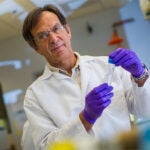 A new theoretical framework outlined by a Harvard scientist could help solve the mystery of how bacterial cells coordinate processes that are critical to cellular division, such as DNA replication, and how bacteria know when to divide.

For decades, scientists have believed that cellular division is triggered when bacterial cells reach a particular size. The new model, described by Ariel Amir, an assistant professor of applied mathematics and applied physics, in a paper recently published in Physical Review Letters, suggests that cells coordinate the replication of their DNA not through size, but by how much they grow over time.

“The focus of this work is on how bacteria regulate their size — how do they know when to divide, so they all remain largely identical,” Amir said. “The question is: How do they do that, and how does that couple with other processes in the cell, such as DNA replication?”

Scientists have long known that bacteria can double their population in as little as 20 minutes, but a series of pioneering studies in the late 1960s revealed that it takes about an hour from the time DNA replication starts until cell division occurs.

The remaining mystery has been in how those two processes are coordinated.

“The answer is quite remarkable,” Amir said. “Earlier studies showed that what bacteria do is actually start the DNA replication process for subsequent generations. A single bacterial cell may actually be replicating DNA for its grandchildren, or even its great-grandchildren.”

“What I propose is something that can reconcile these two pictures in a very simple way,” Amir said. “Rather than trying to reach a critical size, cells try to add a specific volume from the initiation of DNA replication to the next replication event. To do this, the cells need to measure a difference in volume, which is much easier, and they can achieve this in a biochemical way that doesn’t include any absolute measurement.”

Though the exact biochemical process hasn’t been identified, Amir suggested that it might be similar to a system described in several studies in the 1970s.

Ultimately, Amir said, understanding how bacteria regulate their size could spur advances on a host of questions connected to the ways cells regulate biological processes.

“This is a doorway to a larger question of how cells regulate and coordinate all the processes which occur in them, which is a huge question in biology,” Amir said. “This is an example where we can quantitatively understand some aspects of that, so I think this might lead us to some broader questions.”