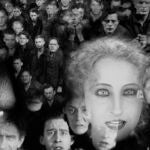 A single photograph may capture a moment. A collection can open a window to the past.

Earlier this year, photograph conservators from the State Hermitage Museum in St. Petersburg, Russia, visited Harvard and shared some treasures held by the Hermitage, many never before seen in the West. Recently, they shared several of these images in digital format. These include rediscovered personal photographs of Russia’s doomed royal family and nobility, hidden following the Revolution or “lost” to storage and transfers over the decades.

The Hermitage has embarked on an intense effort to preserve and catalog the more than 500,000 items. “We know that the importance of photographic collections will only improve with time,” said Natalia Avetyan, a curator of photographs from the Hermitage, who was among the group visiting Harvard’s Weissman Preservation Center in April.

Called “The Imperial Collection,” the photos and other materials provide invaluable information about Russian life in the 19th and 20th centuries.

Past preserved in photographs