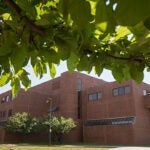 Robert Gardner ’48, A.M. ’58, the noted anthropological filmmaker who founded the Peabody Museum’s Film Study Center, died of cardiac arrest at the age of 88. For several years, Gardner taught filmmaking in Harvard’s Department of Visual and Environmental Studies and directed the Film Study Center from 1957 until 1997.

Gardner headed up the Harvard Peabody-New Guinea Expedition (1961-63) that resulted in his acclaimed film “Dead Birds,” a groundbreaking documentary about a Stone Age tribe that survived into the 20th century, and the book “Gardens of War”; among his collaborators on that now-legendary project were Michael Rockefeller, Peter Matthiessen, Karl Heider, and Eliot Elisofon. Gardner also served as founding director of Harvard’s Carpenter Center for the Visual Arts and later formed the creative photography collective Studio7Arts.

Gardner was at Harvard in October 2013 for the 50th anniversary of “Dead Birds,” and a retrospective of his work hosted by the Harvard Film Archive.