An ancient tribe, and change 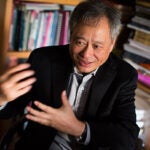 50 years after ‘Dead Birds,’ Robert Gardner recounts making the film, and its sequel

October marks the 50th anniversary of “Dead Birds,” the groundbreaking documentary of a Stone Age tribe that survived into the 20th century. Its creator was Robert Gardner ’47, the longtime director (1957-1997) of the Film Study Center, the creative arm of Harvard’s Peabody Museum of Archaeology and Ethnology.

The Harvard Film Archive hosted a recent retrospective screening of “Dead Birds.” Gardner helped to found the archive too, in 1979, and remembered its prototype as “a few shelves in the closet” at the Carpenter Center. “Things have only gotten better as time has gone by,” he said.

Time has been kind to “Dead Birds,” a lyrical study of the lives, beliefs, practices, and ritual warfare of the Dugum Dani peoples in the remote Grand Valley in the highlands of western New Guinea. At the invitation of the Dutch government, Gardner and a small team spent six months in 1961 filming what were then thought to be the world’s last practitioners of Neolithic culture, with stone tools, clan-sized villages, pervasive magic, and ritual warfare.

Gardner described his 1961 self in his book “The Impulse to Preserve” (2006), as “a lapsed graduate student trying to invent an anthropology that used film and photography instead of words.” He went on to make a film every two or three years between 1964, when “Dead Birds” was officially released, until “Forest of Bliss” in 1985. These days, the director still lives near Harvard Square, and would rather write than make films.

The day after the anniversary screening, the archive sponsored a related screening. “Dead Birds Re-encountered” (2013) is a cinematic rendering of Gardner’s 1989 return to the scenes and people of the 1963 film. It was filmed in the same villages and the same valley, though the locale is now called Irian Jaya, Indonesia. In the intervening years, one traumatically new feature had appeared: a road. Gardner called it “a scar” that cut across a once “ravishing valley.” The opening scene is of a truck rumbling noisily past, kicking up dust.

The truck scene is a jarring antipode to the rhythms of the earlier film that first screened at Harvard in 1963. “Dead Birds” revolutionized the way anthropology was presented on film.

It is organized in a classic dramatic story arc. The protagonists are two Dani tribesmen: Weyak, a farmer and warrior who guarded one fringe of his village’s frontier, and Pua, a dreamy and hapless boy of 8 who herded swine for his grandfather. Man and boy illustrated both the arrival at manhood and the aspiration to reach it.

Bodies star in “Dead Birds” too, and offer a look at how humanity once was: splayfooted, naked, and with powerful and utilitarian adult bodies. The children are spare and naked. Young adult men have the hard muscles and fluid gait of middle-distance runners. Women and girls wear short woven skirts. Men and boys wear phallocrypts, upright slender gourds that are tied around the torso and conceal the penis.

“Dead Birds” was regarded as revolutionary in part because of Gardner’s cinematic eye. A bird of prey glides over a green valley where stick-and-daub villages interlock with ancient paths. In the pitch darkness, Pua lights a fire and roasts a small bird, then keeps a feather for his hair. Weyak hoes a garden plot with a blunt stick. On a grassy hillside, men with spears swarm at each other, feinting and shooting arrows. They break from war when it rains, for fear that their feathered headdresses will get wet. Now and then, someone gets hurt. Rarely, someone dies.

In sum, Gardner in 1961 was filming long-ago humanity, when people generally were bound to each other by magic and ancient paths, and to an ideal of war whose object was not annihilation but tribal honor. (Each tribal death required revenge for another, an accountancy that kept a cycle of war slowly turning.)

At work too in “Dead Birds” were Gardner’s allegorical voice-over; his unflinching close-ups and dramatic long shots; his you-are-there battle scenes; and his captivating soundtrack, which later engendered some controversy because it was layered over the film track during editing. In those days, syncing sound to film amid field conditions was impossible.

Gardner’s sound recordist during the 1961 film trip was Michael Rockefeller ’60, son of then-New York Gov. Nelson Rockefeller. Michael disappeared later that year during another expedition in Dutch New Guinea, and was declared dead in 1964.

The battle scenes in “Dead Birds” were controversial too, since what seemed like one battle was a composite of several. For the visiting Westerners, there were hazards even at the periphery of the action. Dani arrows, long and reedlike, were barbed but featherless. Trajectories could be looping and erratic. “Michael Rockefeller got one in his leg,” said Gardner of an errant arrow. “I never told his father. All hell would have broken loose.”

Adding to the power of the film were its intimate portraits of daily life as it likely was in the Stone Age, with feasts, funerals, farming, pig herding, raids, gestures of magic, and in this case long treks to the tribe’s one source of salt. (Women soaked banana leaves in briny water, and then bore them home in heavy bundles.)

For ethnographic filmmakers, it was a unique moment. The Dani were completely unaware of what the whirring film cameras did. “My camera,” Gardner wrote later, “was no more or less interesting than my belt buckle.” (He had a rule back then too, to preserve the secret of film’s magic: No photographs were to be shown to any of the Dani.)

At the retrospective screening of “Dead Birds” on Oct. 10, Film Archive programmer David Pendleton said the movie had “touched off a revolution” in documentary cinema, praise that Ilisa Barbash repeated in a formal introduction. She is the Peabody’s curator of visual anthropology and co-author of “The Cinema of Robert Gardner” (2008). “You don’t have boring middle shots,” said Barbash. “He keeps you visually engaged.”

“Dead Birds” premiered at Harvard’s Loeb Drama Center in a ticketed event open mainly to faculty, administrators, and a smattering of Harvard undergraduates.

“The person who understood it best was the president of the University, Nathan Pusey,” said Gardner. “He came back again” for the second screening that night.

The filmmaker, still strikingly handsome with a shock of white hair, said “Dead Birds” was a “different film” at its first screening: 110 minutes long instead of the 85-minute duration of its official release in 1964.

A coterie of his friends had “urged me to make it shorter,” said Gardner, which he regrets now. Among them was author Lillian Hellman and novelist Peter Matthiessen, a naturalist who had been on the film team in Dutch New Guinea. (Along too was visual anthropologist Karl G. Heider ’56, Ph.D. ’66, who co-wrote with Gardner 1969’s “Gardens of War: Life and Death in the New Guinea Stone Age.”)

The longer film? “I have it around somewhere,” said Gardner.

Gardner, who will be 88 on Nov. 5, skipped the screening of “Dead Birds,” but was on hand for the premiere of “Dead Birds Re-encountered” the next night. He first thought of calling it “The Road,” but during editing decided to focus on the people who in 1963 elected to embrace Gardner and his crew instead of killing them.

With him on the 1989 film trip were his wife, two sons, photographer Susan Meiselas, and two friends — both dead now — whom Gardner credits with most of the work: documentary filmmaker and Harvard Professor Richard P. Rogers and pioneer aerial photographer Robert E. Fulton III ’61.

“Re-encountered” is only 46 minutes long. “I wondered at the end of editing it why it was so short,” said Gardner. “I usually drag things out.”

It is a film of reunion. The most affecting scene comes first, when Weyak, now a slender old man in a Western shirt and shorts, meets Gardner again. Nearly three decades after being filmed guarding, farming, weaving, and making war, he weeps against the bigger man’s shoulder, shouts, hums, and bares his teeth in a wide smile. “You have come from your home to see us here,” said Weyak. He added, with a shade of the disbelief he felt in 1961, “These are real people.”

“Re-encountered” is also a film of remembering. The longest scene, and the most dramatic, is a monologue by Weyak as he sits cross-legged in his hut. He recounts the film team arriving, and their welcome once it is determined that they are human. Weyak tells how his desires have changed in the intervening years, and those of the whole village. ????Just clothes or money,” he said through subtitles. “No more fighting. No.”

The road is not the only change, or Weyak’s Western shorts. Pua, wearing just a headdress, gets a helicopter ride, then climbs into a car to visit a nearby town. Surrounded by curious Indonesians, he scans the wares in a souvenir shop, including a shelf of stone axes. Pua also pages through a book.

“This is how I used to be,” he said, pointing to one old picture of the way things were. There was another of Michael Rockefeller. “Mike as a boy,” said Pua. “He died. He went into the ocean.”

“Re-encountered” is a film about aging too. Weyak looks shrunken in a jacket and military cap. But he is animated during another one of the film’s signature scenes. The old men watch themselves young in “Dead Birds,” screening it on a tiny monitor.

The new film is about a kind of fame, too. Pua recounted how tourists sought him out, and said he had made a sort of business from his “Dead Birds” renown. During one scene, villagers enact a pig roast for a clutch of German tourists. “Nothing had changed,” said Meiselas, remembering the moment. “It was completely ritualized and totally communal.”

But the audience had changed. In 1961, the sun-beaten Westerners wielding cameras and sound booms lived in a tent on the edge of the village. By 1989, the tourists with cameras could have been at a zoo or on a safari.

Regarding Pua, Gardner said during the panel, “I’m so glad somebody didn’t put him in clothes and take him on an airplane to Paris.”

In the newer film, he said he traveled back to the old scenes of “Dead Birds” in search of old friends and not as a field anthropologist. “I approached it, if I may say so, as an artist,” said Gardner. Then he added what could summarize his 60 years of filmmaking in search of humanity’s core. “I was never a scientist.”