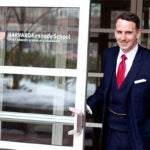 Despite finding great success and strong customer loyalty in a fiercely competitive industry, Demoulas Super Markets, a regional grocery chain owned by two flanks of the Demoulas family, has been embroiled in a bitter internal feud that dates to the early 1990s.

The first chapter of the dispute resulted in the most expensive lawsuit in Massachusetts history; now, tempers have boiled over again, with employees and customers protesting the ouster of CEO Arthur T. Demoulas and two top deputies by a board controlled by members backing a rival cousin. Demoulas’ firing prompted thousands of workers and their supporters to rally at corporate headquarters this week urging his reinstatement. Dozens of lawmakers have come out publicly in support of the protesting workers, some of whom have also been fired.

Established in 1917, the privately held company has 71 Market Basket grocery stores across Massachusetts, New Hampshire, and Maine. It has approximately 25,000 employees and estimated total revenues of $4.3 billion in 2013.

The Gazette spoke with John A. Davis, a senior lecturer of business administration and the faculty chair of the Families in Business program at Harvard Business School, about the dynamics of family-owned companies and the particular challenges they face.

GAZETTE: What are some of the common issues that family owned businesses contend with, and how are they different from what other businesses confront?

DAVIS: Family companies are the biggest sector out there among private companies, and account for approximately half of all the publicly listed companies in this country. So it’s a huge, huge sector. Maybe half of the biggest companies in the country are still family controlled, all the way up to companies like Wal-Mart.

It’s a very quiet sector, but it’s also a very important one and, arguably, the single most important sector in our economy. If you take a look at the performance of family companies, most all of the research is demonstrating that by a significant margin, on average family companies perform better. They have a lot going for them, but there are high performers and weak performers. You’ve got companies like Mars, a huge, family controlled behemoth in the food products industry; most of your media companies are family controlled; you’ve got Fiat that’s doing quite well. Market Basket [appears to be] a very strong company — high quality, workforce loyalty. … But these family companies are vulnerable to things that not all companies are vulnerable to.

All companies need a good ownership base, no matter what kind of company it is, even whether it’s public or private. You need to have an ownership base that is stable and supports management. Family companies do best when they are long-term oriented, [when] they make investments and develop relationships and loyalty for long-term returns. They are not speculators, in general. They’ll wait years sometimes for good returns because they want to do the game right. Now, if you have an unstable ownership base, which this company obviously does, it’s really hard to manage well in that environment. If the family is unstable, if the family is rivalrous, if family members block one another for whatever reason — it could be that they disagree on strategy or they just don’t like each other — if that starts getting played out in the ownership area, it doesn’t take very long at all before the management really feels it and it affects how things get done and it even affects if people are willing to invest their careers in the company.

So you have to be very careful in a family business to make sure that the ownership base, and the family base, is united and disciplined. It is natural for owners and family members to disagree to some extent with one another. You don’t want 100 percent agreement, but you want unity. And that requires that when we disagree, we have mechanisms where we talk out our disagreements and get on the same page again and then march forward. And if you don’t have those consensus-building mechanisms, you’re usually in a bind.

GAZETTE: What’s the best way to avoid or to resolve those kinds of problems?

DAVIS: A very strong shareholder agreement, number one, that says that family disagreements don’t go to court. When families go to court, it rarely works out well. In most families, family members suing each other is an embarrassment — and should be. The temptation to retaliate is pretty high. The agreement among the owners states that, “In the event of these kinds of disputes, this is how we’re going to deal with it.” Best practices usually include working it out internally, maybe through a family council or the company board, then working with a mediator and then finally, binding arbitration. But we don’t go to court and if you choose to go to court, there are penalties for those owners for going to court. So it’s important that families set up these agreements and this family apparently didn’t.

GAZETTE: In terms of smart corporate governance, is ensuring that some non-family members have a voice in executive decision-making the best strategy?

DAVIS: Yes. I recommend a board with representatives of the owners but only a few, the CEO and no other managers, and independent members — people who are not owners and also not managers, people who are fair-minded, bring expertise and outside perspectives to whatever issues come up, and can help resolve internal conflicts so that the company can unite behind a particular strategy and march forward with a long-term plan. You want the family owner’s point of view on the board because when the board makes a decision, you want to know that the owners are going to line up behind it. But you don’t want the family to dominate the board because you’re trying to reduce and manage family politics, which is likely if not inevitable.

The important thing to remember about families is that the issues don’t have to be big ones to get a family riled up. Sometimes [what seem] like little things really offend or create mistrust within a family. Because family feelings can be sensitive, and also because memories in families are remarkably long, you need to be able to be extra-careful in a family business that you have very solid governance to help make family members feel secure that their interests are well and fairly represented. We see good governance making a huge contribution in well-run family companies, to the benefit of the company and to the family.

GAZETTE: You’ve written about the social psychology of family shareholder dynamics. Could you explain what those typically are and how they affect a business?

DAVIS: In a family ownership group, it’s not just who owns how much, but how are they related? You have to understand the family relationships among the owners, how ownership is distributed, and the relative power of different owners and different ownership groups in the mix. A group of siblings will have a different kind of relationship typically than will a group of cousins. The nature of the family relationship — whether they’re tight and mutually supportive or rivalrous — makes a huge difference in the ownership group. The best predictor of how cousins will get along is how their parents, the siblings, got along. If the siblings set a good example for the cousins, the cousins will usually follow it. There are exceptions to every rule, of course, and I have seen cousin groups who get fed up with their parents’ bickering and come together and say, “We’re going to do this better, we can get along.” But those tend to be the exception.

To understand the shareholder dynamics, you also need to understand how ownership is organized — is it organized within a family holding company or do owners have a shareholder agreement? The more clarity there is about who owns what and what are the rights and responsibilities that the owners have, the better. And again, good governance helps, meaning the rules, policies, agreements that we share and the forums like boards and shareholder meetings. Driving all this is good leadership. You need leaders that are seen as fair and wise, and understand how to make decisions so that we trust them. If we have good leadership, along with good safeguards in our governance system, we’re probably going to manage most of these ownership issues well.

GAZETTE: It appears that much of the infighting in the Market Basket situation stems from issues connected to succession. Is there a lesson here for companies that envision passing along the business to heirs?

DAVIS: Obviously, clarity about who will succeed the previous leader is important, but disputes are not always caused by the lack of a clear plan. Sometimes each side is really clear about who should be the successor, they just disagree. Families like this one need help in agreeing on their common purpose and what they can do to treat each other respectfully. They need to move on from their old disputes, but if they can’t move on, business decisions still need to be made. Families benefit from having a clear buy-sell agreement, so that if we can’t get along, one of us can buy the other out. You don’t want to play that card unless you mean it, but owners have to know it’s in the deck of cards and can be played. Because people need to know that if they don’t behave reasonably and respectfully that the other side can play it. And if the card is played, you restructure the ownership group, buy one party out, and then move on with, hopefully, more aligned owners that see things pretty much the same way and agree on the rules. That is probably needed here. It looks like this family, unfortunately, got off on the wrong foot and then went down this very argumentative and disruptive path and could never get off of it. They’re still on it.