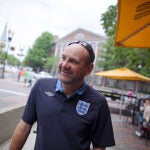 In soccer, a game plan for life

The U.S. Supreme Court ruled in a 5-4 decision that closely held, for-profit corporations have a right to exercise the religious beliefs of their owners and therefore cannot be required by the Affordable Care Act (ACA) to provide contraception coverage to employees if it conflicts with those views.

In Burwell v. Hobby Lobby Stores Inc., the Green family, owners of a large chain of arts-and-crafts shops across the nation employing more than 13,000 workers, argued that some “morning after” contraception methods were incongruent with their religious objections to abortion. The court ruled that forcing companies to pay for such coverage, or faces fines of $475 million annually for failing to do so, was a substantial burden and a violation of their rights under the Religious Freedom Restoration Act of 1993 (RFRA). Nonprofit religious employers, like schools and charities, are already exempt from such a mandate.

Associate Justice Samuel Alito, writing for the conservative majority, said the Department of Health and Human Services (HHS) could find less-intrusive ways to ensure that workers received contraceptive coverage without forcing Hobby Lobby to pay for it outright or through government-imposed fines. Alito wrote in his majority decision, the contraceptive coverage “clearly imposes a substantial burden” on the owner’s beliefs. The decision does not provide shelter for companies seeking to avoid other federal mandates, such as tax laws, or to justify racial discrimination on religious grounds, the court said.

In her dissent, Associate Justice Ruth Bader Ginsburg called this “a decision of startling breadth” that recognizes religious freedoms under RFRA that are not found under the First Amendment, and one that opens the door to a host of future challenges. “The court’s expansive notion of corporate personhood … invites for-profit entities to seek religion-based exemptions from regulations they deem offensive to their faiths,” she wrote.

The Gazette spoke with Mark Tushnet, William Nelson Cromwell Professor of Law at Harvard Law School, about the decision and what it means for future corporate challenges to the ACA.

GAZETTE: What was your reaction to the decision, and did anything surprise you?

TUSHNET: It wasn’t terribly surprising except for the fact that Justice Alito wrote it when everybody was expecting the chief justice to write it. But the bottom-line outcome: I think most people expected it to be in favor of Hobby Lobby.

TUSHNET: The tenor of the oral argument, the political context in which the case arises, the general sympathy that conservatives have for religious-liberty claims and the hostility they have to — we’ll call them “abortion-related claims.” That’s not technically what’s at issue here, but it’s located in that conceptual space.

GAZETTE: Does HHS have the power to extend the nonprofit exemption to these for-profit companies? And if not, could the employees of these businesses be left without contraception coverage?

TUSHNET: I believe that it does, but I’m not a specialist in the ACA. Justice Alito says, unrealistically, Congress could pass a statute that would provide funding for this, but that’s not realistic.

GAZETTE: Does this open the door to future challenges both to the ACA and, more broadly, to the government’s ability to apply the law equally, as Ginsburg warns?

TUSHNET: Phrased in that way, does it open the door? The answer is yes. Will anybody get through the door when it’s opened? My guess is very few people would, but we won’t know until the cases get litigated.

GAZETTE: Why might it be difficult to get through?

TUSHNET: Because Justice Alito includes what look like significant qualifications. We’re dealing only with this contraceptive issue. We’re not dealing with blood transfusions or vaccinations. We’re not dealing with claims of discrimination. These are closely held corporations, not public corporations, so there’s enough in there to suggest to lower courts that the Supreme Court is not pushing hard on this. On the other hand, with respect to each of those qualifications — and Justice Ginsburg points this out — [Alito] doesn’t say that these would be losing claims. He just says, “We’re not dealing with them.”

GAZETTE: Given the religious-objections basis validated by this decision, does it now offer other companies an easier route to seek exemptions for other health-related coverage, like those who object to mental-health treatment or medication?

TUSHNET: The substantive analysis that Justice Alito goes through is: “Is the government’s interest compelling, and is there some reasonable alternative method to promote that that wouldn’t burden religious beliefs?”With respect to the Scientologists and the Christian Scientists [for example], the thought would be there’s no other reasonable alternative. That’s how he’d suggest that there’s a distinction.

GAZETTE: Ginsburg argues that the decision privileges the religious rights of employers over those of their workers, who may or may not hold those same beliefs, and denies them coverage they may not have access to otherwise. Is that a fair reading on her part?

TUSHNET: Justice Alito says no, it’s not a fair reading, because we’re not denying them access; we’re saying there are other ways to provide them access.

GAZETTE: As it stands now, Hobby Lobby is free not to provide coverage, yet there’s no other mechanism in place to provide it to those workers or those similarly situated.

TUSHNET: As of 2 p.m. [Monday] afternoon, but who knows what it will be tomorrow? My guess is someone in HHS is working on this already.

GAZETTE: What about the question of religious beliefs of affected employees?

TUSHNET: That question is not presented in this case because HHS does not say it’s acting on behalf of people who feel a religious requirement or motivation to use these four methods of birth control. It’s just not there in the case. It’s hard to imagine how you’d present the case. But in a case where the issue was properly presented, the balance between the employer’s interest and the employee’s interests might be different.

GAZETTE: What is likely to happen next? Will we see an uptick in the number of businesses that take exception to the ACA mandate? Will the federal government step in and pay for those workers who are without coverage as a result of this decision?

TUSHNET: I think that after a relatively short period, HHS will do the thing that it’s done for nonprofits, which is to say, “If you certify that you have religious objections, your insurer will cover the cost without involving you.” Those are being challenged in the nonprofit context. And so Hobby Lobby, or the equivalent, would challenge this new regulation as well. Justice Alito seems to say the nonprofit compromise is satisfactory under the statue, under RFRA. But again, as Justice Ginsburg points out, he doesn’t actually say that. [But the idea of] this “devastating blow to women” just seems to me completely overstated. It will take a while to shake out. But in the long run, these techniques will be available to women in one way or another.

GAZETTE: Does the ruling extend new rights to companies?

TUSHNET: As Justice Alito says, corporations have a lot of constitutional rights as surrogates for individuals. This was one of the places where there was a coherent argument that they shouldn’t. So in that sense, it is something of an extension. But there aren’t very many other rights that are in the same conceptual space. Yes, it moves the line a little, but the line was already pretty far in the direction of corporate rights anyway.