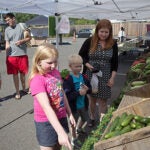 Time to go to market

Harvard University today unveiled a new, University-wide policy and set of procedures to prevent sexual harassment, including sexual violence, related to gender, sexual orientation, or gender identity. Under the new framework, which applies to all Harvard faculty, students, and staff, a centralized office will be created to investigate reports of sexual harassment to determine whether the new policy has been violated. The policy and procedures go into effect at the beginning of the 2014-2015 academic year.

The first University-wide Sexual and Gender-Based Harassment Policy will form the basis for revising existing policies that previously resided at and were administered by Harvard’s 13 Schools and other units. The policy and procedures were forwarded in April to the U.S. Department of Education’s Office for Civil Rights (OCR) for review, and Harvard is awaiting a response. OCR oversees compliance with Title IX, the federal law that prohibits gender discrimination in educational institutions that receive federal education funds.

The release of the new policy and procedures builds on more than a year of efforts that included the hiring in March 2013 of Harvard’s first University-wide Title IX officer, followed by the formation in May 2013 of a working group to revise policies and procedures, and the creation this past spring of a task force to recommend improved strategies to prevent the full range of sexual misconduct.

“Harvard is deeply committed to fostering an educational environment free of gender-based discrimination, particularly sexual misconduct and sexual violence, to acting vigorously on reports of discrimination, and to supporting those who have experienced it,” Harvard President Drew Faust said.  “This new, progressive policy — alongside the new, centralized procedures for investigating reports — will significantly enhance Harvard’s ability to address these incidents when they occur.  Separately, the prevention-focused task force has already begun recommending approaches that will increase access to services for those who have experienced sexual misconduct and, ultimately, will help us better understand how to prevent incidents before they occur.”

A central administrative body of trained investigators reporting to the Title IX officer, in the Office for Sexual and Gender-Based Dispute Resolution (ODR), will investigate sexual and gender-based harassment complaints against students, often working closely with a School representative. The group will make findings of fact, determine whether there was a violation of the new policy, determine whether there was a hostile environment, and recommend measures to remedy any hostile environment.

In accordance with guidance from the federal government, findings of fact will be made using a “preponderance of the evidence” standard. This standard of proof generally means that it is more likely than not that the underlying allegations are true.

Once completed, ODR investigative reports will be referred to the appropriate disciplinary body — such as the College Administrative Board — of the individual School involved. Unlike complaints against students, complaints against faculty, staff, other Harvard affiliates, or third parties will be referred directly to the School or unit, which will use its existing procedures but will have the option to refer the matter to the ODR to perform some or all of the investigative tasks.

The new policy and procedures were produced by the University-wide working group convened more than a year ago by Mia Karvonides, Harvard’s Title IX officer, and chaired by representatives from Harvard College and Harvard Business School.  Karvonides and members of the working group consulted broadly with faculty and administrators responsible for handling sexual misconduct situations, and looked carefully at existing University and School-based policies and practices.  Karvonides kept an open-door policy, heard from individual students and alumni about their experiences and concerns, and incorporated many of those ideas and concerns into her work.

“From the beginning, the working group wanted to create a new policy and procedures that apply and bring clarity to every member of the Harvard community, that would meet the University’s legal obligations, and that would enable us to investigate reports more effectively,” said Karvonides, who joined Harvard after five years at the Office of Civil Rights in Boston. “We also wanted the policy to conform not only to Title IX — which bans sex discrimination — but also to Harvard policy and state laws prohibiting discrimination on the basis of sexual orientation or gender identity. I’m confident we accomplished all those goals.

“While we submitted the new policy and procedures to OCR for review in April, with the hope of receiving feedback before implementing them, we just can’t predict how long it will take for the federal authorities to get back to us,” Karvonides added. “Collectively, we decided that we couldn’t afford to continue waiting, given the need to have the new policy and procedures fully in place in time for the coming academic year.”

In recent years, Harvard has taken a number of steps to address sexual misconduct. In 2002, the University created the Office of Sexual Assault Prevention and Response (OSAPR), which works to prevent sexual violence through training and education, and provides confidential support for students who have experienced sexual misconduct. Last year, Karvonides identified and trained Title IX coordinators at every Harvard School and across all units.

In April, Faust created the University-wide task force — composed of faculty, students, and staff and led by Steven E. Hyman, a former Harvard provost and former director of the National Institute of Mental Health — to recommend how to reduce sexual misconduct and better support those who have experienced it. Faust recently accepted several immediate task force recommendations, including the provision of new resources for OSAPR and its recently appointed director, Alicia Oeser. The task force will continue its work this fall.

Each Harvard School is working to bring its policies into accordance with the new, University-wide standard. At the Faculty of Arts and Sciences (FAS), which includes Harvard College, Professor Alison Johnson is leading a committee of faculty, students, and staff to update FAS policies.