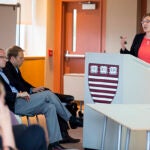 Soccer tournament kicks off in Brazil amid concerns over protests, strikes

With the World Cup, one of the globe’s most high-profile, high-price-tag sporting events under way in Brazil, organizers and fans are holding their breath, anxious to see if protests and strikes will disrupt the monthlong competition. Its preparations were marred by charges of corruption, mismanagement of funds, and stadium construction delays, including a partial collapse that killed two workers in São Paulo.

Filipe Campante, associate professor of public policy at the Harvard Kennedy School, will return to his native Brazil for the quarterfinals at the iconic Maracanã stadium in Rio de Janeiro. A lifelong soccer fan, he spoke with the Gazette about the World Cup and its challenges.

GAZETTE: The World Cup conjures images of the nation of Brazil uniting in its love of soccer for a month of celebrations. What kind of sense do you have of the atmosphere in the streets this year?

CAMPANTE: Typically, every four years there is a huge party atmosphere. People decorate the streets, they wear the national team colors, put flags on their cars and windows. Businesses decorate their shops. This year, while you might have expected that with the tournament being in Brazil this “World Cup atmosphere” (“clima de Copa,” in Portuguese) would be more intense than usual, it has actually been a lot less intense.

But the event has been hugely controversial, especially over the last year. A year ago, many protests and street demonstrations happened around the Confederations Cup, a kind of a dry run for the World Cup, and all of that galvanized a certain sentiment and opposition to the way that the event was organized, and the money that was spent, and the perception that a lot of that money was spent ineffectively. People feel there’s so much that could have been done with that money, and instead it was wasted on stadiums, some of which will hardly be used.

Beyond that, while governments try to sell these events in terms of the benefits they will bring, things like infrastructure and all the public works that are going to be catalyzed by the whole process, very little happened on that front. There’s basically very, very little legacy that anyone can point to … Airports are by and large pretty much as bad as they were before. Very little has really been done in terms of public transportation. So I think there’s huge disappointment surrounding that as well.

GAZETTE: Will the fact that Brazil is also hosting the Olympics in 2016 put pressure on officials in the next two years to make any significant changes in terms of their preparations for that tournament?

CAMPANTE: I think one of the side effects of the reaction to the World Cup is that the Olympics (set for Rio) has become a bit of a political hot potato. Right now it’s almost as if Brazilian politicians don’t want to talk about it. They don’t want to be seen pushing that too much. And I think the International Olympic Committee (IOC) has been raising alarms left and right in the press partly as a result of that. The IOC feels like there’s a lot that needs to be done. It doesn’t seem like it’s being done right now, and the politicians don’t seem quite as committed to it as they were. For Brazilian politicians right now, it’s a very unpopular thing. You don’t want to be seen as a politician embracing it. So I think there are very serious questions surrounding what the preparations for the Olympics are going to be like.

GAZETTE: How do you think the outcome of the World Cup will affect Brazil’s presidential elections this fall?

CAMPANTE: Right now, just about every analyst would agree that the current president is favored for reelection, but she has a fragile position and she’s not a particularly strong political presence of her own. On the other hand, there’s this perception that whoever is in power when Brazil does well in the World Cup — and doing well means winning it — benefits from that. I guess that constitutes a bit of a wild card, particularly this year, as it’s taking place in Brazil. However, the poor organization in the lead-up to the tournament has really come to constitute something of a black eye for the current administration, so I think there is more riding on that success than usual.

GAZETTE: Do you think there will be street protests similar to what happened last year during the Confederations Cup?

CAMPANTE: There will be protests, but their reach is a little bit hard to predict. Last year, for instance, no one anticipated what was going to happen. It could happen again, but I think that depends a lot on how the security forces react. Last year, there was a clear mishandling of the protests by the police that contributed to the dimensions that they ended up taking. In Brazil, the security forces are typically not well prepared to deal with this kind of situation, and often their reactions tend to be violent. Major protests could happen, but the biggest trouble will come if reaction by the security forces turns out badly.