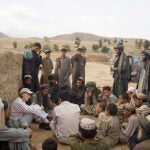 Michael Rockefeller fellowships give grads a year of adventure

During his four years at Harvard, Chris Stock studied math and music history, sang with the glee club, and flew across the snow as part of the Nordic ski team. He had a full, rich College experience, but at the end of it he still wanted … something else.

So instead of going to graduate school, or to work, as many of his classmates are, Stock is going to Morocco.

And, instead of book learning, he’ll be learning about the oud.

Stock’s plan to spend a year studying the lutelike instrument of the Middle East may not meet the career-focused expectations of hard-charging peers (and parents), but it fits nicely with the goals of the Michael Rockefeller traveling fellowship.

“You’re looking for somebody who has an open question about themselves and their future that is yet to be answered … a restlessness,” said Robb Moss, chair of both the Department of Visual and Environmental Studies and the fellowship’s board. “It’s an experience that often moves people in a direction they hadn’t expected before.

The five recipients of support for a postgraduate year will add their names to the nearly 200 who have benefited from the fellowship, which is set to turn 50 next year. Their projects touch on music, service, dance, and religion.

Morgan Brown, an international program consultant for Harvard Global Support Services and an assistant coach of Harvard’s baseball team, has an idea of what lies ahead for the group. Brown, who graduated from Harvard College in 2006, traveled to India as a Michael Rockefeller Fellow the following year. He spent the time with a public health-oriented nonprofit, working, among other things, with people living with HIV.

“I probably learned more and benefited more from the people I worked with than I ever gave back,” said Brown, today a member of the fellowship’s board. “It was an unequal trade.”

The namesake of the Michael C. Rockefeller Memorial Fellowship was a 1960 Harvard graduate who died a year later on an expedition to collect art from remote communities in New Guinea. Rockefeller disappeared while trying to swim to land from a capsized raft.

The fellowship, established in 1965, seeks to honor and expand on Rockefeller’s interest in engagement with foreign cultures. Each fellow must propose a project that goes beyond academic or professional training to include immersion in the local community.

“This is a year where you’re on your own, not within the structure of a program,” Brown said. “You’re surrounded by people all the time, but you’ve never been so alone in your life. … They’re going to realize how much [they] don’t know, even coming out of Harvard.”

Though each of the new fellows has a plan in mind, the steps toward its execution are less than certain.

Tonatiuh Lievano Beltran, a concentrator in engineering sciences, is planning to go to Salvador, a city of 2.7 million on Brazil’s coast, to work with a nonprofit to help the disadvantaged. He also wants to study the city’s music and religion, and the martial art of capoeira.

Lievano Beltran’s plans go only so far, however. About where exactly he’ll work and where he’ll stay, he is unclear. The idea is to build the project from the ground up, an approach Stock described as a “bang-on-the-door process” and representative of the fellowship’s challenges.

Alice Li, who expects to travel to Spain to study dance and set up a dance-therapy program for the disabled, said that after three summers of conducting stem cell research, she’s looking forward to feeding her artistic side and immersing herself in flamenco.

“I want to live and breathe this dance style.”

Li said that past fellows have told her that it’s not uncommon for projects to veer significantly from their origins. It’s also not unheard of for them to fail entirely.

Danielle Schulkin, who plans to travel to Israel to explore theater’s potential for religious mediation, said that hearing past fellows talk about their travails helped ease anxiety about an opportunity whose very freedom presents an enormous challenge.

“It’s almost freeing in a way, knowing it’s OK if they go wrong and we can [still] learn from them,” Schulkin said.

There are personal dimensions to each project. Paschal Mensah, who left his family behind in rural Ghana to tread a rigorous academic path that led to Harvard, wants eventually to return to his homeland to help his community however he can. But instead of going right to graduate school, he wants to nourish the inner fire that got him this far.

“I’ve been working very hard from my head — to the exclusion of my heart — for some time,” said Mensah, whose plan involves exploring flamenco guitar in Spain. “I’m looking for this year to bring the balance back.”