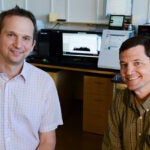 Evolutionary biologists have long held up songbirds, particularly the Galapagos finches first described by Charles Darwin, as an example of natural selection at work. In order to exploit different environments and food sources, the birds developed a startling variety of beak shapes — from short, blunt beaks ideal for cracking seeds and nuts to long, slender beaks designed to sip nectar from flowers. The assumption was that natural selection was the primary, if not the sole, cause for the variation.

But while that variation can be tied, in part, to the way the beaks develop, Harvard researchers say that a common developmental mechanism is also a powerful constraint on new beak shapes.

A team led by Arkhat Abzhanov, an associate professor of organismic and evolutionary biology and a Grass Fellow with the Radcliffe Institute, and Michael P. Brenner, the Glover Professor of Applied Mathematics and Applied Physics and a professor of physics, has demonstrated that a shared developmental mechanism in songbirds is responsible for generating tremendous variability in their beaks, and is also a check against certain types of novel shapes. The work was described in a recent paper published in Nature Communications.

“What this study suggests is that for songbirds which use a conical-shaped beak … even though they show amazing adaptive diversity, they all generate their beaks using the same developmental mechanism, and that puts constraints on the kind of variation they are able to produce,” said Abzhanov. “Ultimately, it shows how efficiently nature can work, because these birds have been able to squeeze as much as they can from the level of variation they can actually produce.”

In addition to demonstrating how a single mechanism can both create and limit diversity, the findings suggest that environment should be considered one of several factors driving variation across species.

“Ultimately, it shows how efficiently nature can work, because these birds have been able to squeeze as much as they can from the level of variation they can actually produce.” — Arkhat Abzhanov

“What we’re trying to do is to mathematically model how beak shapes develop and evolve,” Abzhanov said. “Our study of finches became a beachhead into the great diversity of bird beaks. There are birds with specialized beaks for eating insects, fruit, nuts, seeds — you name it. In fact, the beaks of birds we studied allow them to feed on all diets known to be consumed by songbirds.”

To understand the changes in beak shapes among species, Abzhanov and Brenner in earlier work turned to a technique first described in 1917 by D’Arcy Thompson, a Scottish mathematician widely considered the father of geometric morphometrics, the science of using math to compare biological forms.

In his landmark book, “On Growth and Form,” Thompson described the use of affine transformations — mathematical transformations such as scaling or shear — to illustrate how seemingly disparate animals may be physically related.

Beginning with Darwin’s finches, Abzhanov and Brenner sought to determine whether the shapes of different species’ beaks could be related using those transformations. What they found was that if both scaling and shear were applied, the beak shapes of all the various species could be collapsed into the same shape. There were also groups of closely related species whose beaks could be collapsed with scaling transformation alone, making them natural group shapes. To collapse them with other group shapes, both scaling and shear transformations were needed.

When they widened their study to include close relatives of Darwin’s finches, such as Caribbean bullfinches, Abzhanov and Brenner found the same results — simply through scaling and shear, all beak shapes could be related to one another and further group shapes were revealed.

“What it shows is that the variations in beak shapes are far from random — the birds are using these specific geometric transformations to produce morphological diversity,” Abzhanov said. “With just two mathematical transformations, we can show how all the diversity across these species can be related.”

The new paper further widens the research, examining beak shapes across as many as 200 species of songbirds, representing a large swath of their diversity, and finding a total of 33 common group shapes.

“By itself, that was amazing to see — that a principle we first found in a small group of species continues to apply across this vast group of animals,” Abzhanov said. “We suggest that in closely related species, there is a lot of scaling-based adaptive variation, while shear-based variation occurs more rarely, producing a whole new shape, which is then explored by scaling. However, these two affine transformations are enough to explain the entire diversity studied thus far.”

The question that remained, however, was why such diverse species should have beaks related in such a limited way.

Much of the explanation, Abzhanov said, can be tied to the way the beaks develop. Beginning as a bulbous structure in early embryonic development, the beak forms a “growth zone” inside ― a group of actively dividing cells at the apical end of the beak. As the embryo develops, the growth zone gradually collapses to form the beak’s distinctive conical shape.

Through modeling, Abzhanov and Brenner were able to show that, for a beak to maintain the conical shape created by the growth zone during development and still obey the rules of scaling and shear transformations during evolution, the growth zone must decay at a particular rate. Tests using embryos of zebra finches showed the predictions made by their model to be accurate.

“Thus, most or all songbirds out there in nature, so remarkably diverse and distinct, are united by this particular rule, when we observe a two-tier variation in their beak shapes with scaling and shear transformations explaining their origins,” Abzhanov said. “These birds all have conical-shape bills constructed in a certain way, and this creates a paradox in the entire process of their beak evolution when there is both flexibility and powerful constraints.”