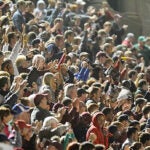 Meeting of the minds

Christensen examines changes in higher ed at IT summit

Opening the fourth annual Harvard IT Summit Thursday at Sanders Theatre, Harvard’s chief information officer, Anne Margulies, put forth the goals of the all-day event: “We’re here to build our IT community, to connect more closely to the University mission, and to learn from each other.

“As Harvard President Drew Gilpin Faust reminded us during last week’s Commencement, ‘Discovery is at the heart of what universities do,’ and most important discoveries of late have been powered by technology. It would be hard to imagine a 21st-century discovery or challenge that won’t have technology as part of the solution,” Margulies said.

The summit included presentations and seminars on an array of IT-related issues, from cloud-based computing to digital privacy to EdX.

The morning keynote speaker was Clay Christensen, whose theory of disruption, set out in “The Innovator’s Dilemma” (1997), has helped researchers understand dramatic changes in personal computing, heavy industry, media, and more. Christensen, the Kim B. Clark Professor of Business Administration at Harvard Business School, talked about the ways online learning is transforming higher ed. “In higher education, we’ve never had disruption emerge until now,” he said.

Christensen’s theory holds that disruption “takes root on the low end” of the market, where customers go unserved or underserved. Eventually it moves toward the center, eroding the position of incumbent market leaders.

To illustrate, Christensen described a 40-year process of disruption in the steel industry. Mini-mills, which initially could only produce low-quality steel for 20 percent less cost than larger, integrated steel companies, entered the industry at the low end in the 1970s. Gradually these firms moved from low-quality steel (rebar) to higher-quality products. “Now, mini-mills account for 70 percent of the steel market,” said Christensen.

Christensen moved next to education. “What Harvard Business School needs to do is think about whether we can use online learning to help our customers-students. I think we can.”

It won’t be easy, he said, due to the complex structure of higher education.

“At HBS, the architecture [of the curriculum] is excruciatingly interdependent,” he said. “Management is like a huge hairball: In order to teach anything, you need to teach everything. But now there are about 3,000 corporate universities, and they have a modular approach. You can just take three weeks on strategy,” or a stand-alone accounting class, and leave the interdependencies of HBS behind.

Christensen made a connection between higher ed today and the reign of mainframe computing. “At the time of the mainframes, the proprietary architecture mattered most and the components were secondary. Everybody knew IBM and Digital, but not the maker of their components. The PC’s arrival flipped all that, and the component makers like Intel then became more important.”

He continued, “Harvard will still have its unique architecture, but the courses are becoming modular, like PC components. The brand [recognition] could move away from the universities to the courses.”

With more ways to access learning, a difficult question looms: “Is this [transformation] a threat or an opportunity for Harvard?” There was a long silence after Christensen posed the question.