In soccer, a game plan for life 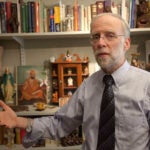 The death penalty and Christianity

With help from Harvard students and alumni, nonprofit connects with youth around the world

With hundreds of thousands of soccer fans flocking to Brazil for the World Cup, Harvard students and alumni are quietly working in some of the nation’s most underserved communities to use the sport to help change children’s lives.

Melanie Baskind ’12 enters Harvard Medical School this fall, and will no doubt return full of ideas about the ways soccer can make a difference to young people.

As part of Coaches Across Continents (CAC), Baskind is spending three weeks in Brazilian favelas showing coaches and community leaders how to teach students important life lessons with help from a soccer ball.

“It is a true example of sport for development,” she said.

The nonprofit is the brainchild of Nick Gates ’91, a former England youth national team player, Harvard soccer standout, and executive for Middlesbrough Football Club. Trekking around the globe in 2001, Gates was struck by the idea of using the sport he loved to help change the world.

“I started traveling, and realized that if I bounced a soccer ball in the worst places … I could engage with young people,” said Gates, who ran the soccer camp company Play Soccer in the United States for several years after college before hitting the road.

Those impromptu interactions “planted a seed,” he said, and got him thinking about soccer as a vehicle for “social development and social impact.” In 2008, he launched CAC. Last year, the organization worked with 20 countries in South America, North America, Asia, and Africa, reaching more than 170,000 children.

CAC targets communities struggling with violence, poverty, and disease, and uses a “soccer as education” curriculum that addresses issues such as female empowerment, conflict resolution, life skills, and HIV prevention. There is no role for conventional matches, however.

“Our model has almost nothing to do with soccer in the sense that we’ve never played a game where two teams score goals,” said Gates. “It’s just that soccer is our vehicle for education.”

One conflict-resolution game positions two groups of players on either end of a line of plastic cones. The players have a relay race, dribbling a ball through the cones, often colliding with and blaming the other person as they go.

The game helps teach players “when something has gone wrong, we should not always blame the other person or try to find someone else at fault,” notes the coaching materials provided by CAC. “We each need to take responsibility for our own actions and concentrate on what we can do better or improve on the soccer field and in life.”

From the beginning, Harvard was central to the organization’s plan. “It is all based on the fact that the starting point was a wonderful relationship with Harvard,” said Gates, who counts as friends the University’s associate athletic director, Tim Wheaton, and Seamus Malin, a former Harvard administrator who is now a soccer commentator and CAC board member.

Perhaps Gates’ most important Harvard connection is to its soccer teams. He regularly recruits volunteers from the men’s and women’s rosters. (More than 35 Harvard students and alumni have been involved with CAC since 2009, many of them soccer players.)

And while the Harvard players have an advantage when applying to the program, “they still have to be good,” said Gates. “They don’t just get a job because they come to Harvard. … What we want are the right people, the people who can make change.”

One of those people is Tim Linden ’12, a star defender who fell in love with Brazil and moved to São Paolo after graduation to work as an analyst in the Brazil office of Harvard’s David Rockefeller Center for Latin American Studies.

Linden, who heard about the program from Harvard teammates, started volunteering with CAC last year, identifying potential partner organizations in Brazil and training coaches. Last Wednesday he was on hand as Prince Harry, in town for the World Cup, visited a CAC affiliate in Sao Paulo and observed local coaches implement its curriculum.

“However you are able to positively bring vulnerable kids together and have constructive conversations and health activities — I am all for,” said Linden. “It’s a really good avenue for reaching people that you otherwise may not.”

Baskind, Harvard’s 2012 female athlete of the year, signed up for CAC fresh off graduation and has trained coaches in Zimbabwe, Zambia, Namibia, and Tanzania. In the coming weeks, she will work with the program in Brasilia, Rio de Janeiro, and São Paolo.

In an email from Brazil, she said she loves being a “role model for young girls in countries where it is not common for females to play football.” The program does a “fantastic job keeping things local, encouraging critical thinking, and supporting self-directed learning,” Baskind said, as well as developing leaders “who can build critical thinking skills among their kids; training them to be good people and not just good footballers.”