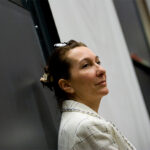 Disarray at the VA

When Ruhakana Rugunda looks at his native Uganda, he sees a nation with many health needs, but one that has also made progress in recent years.

The country needs better sanitation to fight diarrheal diseases, better vaccination rates to fight infectious diseases, and improved lifestyle and health care systems to fight rising chronic ailments. But the nation has also made strides, fighting its biggest killer, malaria, by distributing 21 million mosquito nets this year alone, coupled with insecticide spraying and faster diagnosis. Though preventable diseases are still the top health threat,
Uganda has an active vaccination campaign, has reduced mother-to-fetus transmission of HIV, and is working to lower maternal mortality.

Rugunda, Uganda’s minister of health, was at Harvard this week to share his country’s health care victories and seek ways to address its areas of continued need as part of an intensive, five-day leadership forum for similar officials from 11 nations.

“Health knows no boundaries and no borders,” Rugunda said. “It’s only right that health leaders should meet from time to time.”

The Ministerial Leadership in Health Forum, co-sponsored by the Harvard School of Public Health (HSPH) and the Harvard Kennedy School (HKS), seeks to support and develop health care leadership at the highest levels of governance around the globe. The intensive forum utilizes both the expertise of Harvard faculty members and the experience of the ministerial participants in what HSPH Dean Julio Frenk described as an interactive, peer-driven event.

Senegal Minister of Health and Social Action Awa Marie Coll-Seck said that part of the forum’s value is that it allows participants to step out of the daily frenzy of running their ministries. The days at Harvard give them time to hear about the latest advances, to network with peers, to reflect, and to refocus.

“I know all of them [the other minister participants], but we never had a chance to sit for five days and work together. This is a real opportunity,” Coll-Seck said. “It is very intense, but very useful. … If we put all of our knowledge and experience together, we can build something.”

Since its founding, the forum has attracted 56 ministers of health and finance from 42 countries, according to Frenk, Mexico’s former minister of health. He said the program is intentionally intensive — days start at 7:15 a.m. and run through working dinners to conclude after 8 p.m. — to make the best use of the ministers’ time.

“We challenge the ministers to think about what they will do differently when they return to the office,” Frenk said.

The forum, most of whose sessions were held at the American Academy of Arts and Sciences in Cambridge, kicked off June 1 and ran through Thursday. It featured presentations and discussions on topics including strengthening health systems, care delivery, diagnostics, transformative leadership, the politics of changing health care systems, institutional change, persuasion and negotiation, implementation of reforms, and health systems financing.

On Wednesday, the ministers, HSPH faculty members, and guests gathered at Harvard’s Loeb House for a working dinner and panel discussion that focused on how to translate policy into action. The event, which featured former Massachusetts Gov. Michael Dukakis, now a professor at Northeastern University, highlighted the need for collaboration and consensus-building from a policy’s earliest drafting, and the importance of vigorous follow-through during implementation.

“In my experience, if you want to get something done in the public sector, it’s all about consensus building,” Dukakis said. “It has to begin at the beginning, as you develop the policy. … This approach to policy-making and implementation really does work. If you don’t do it, my experience is you’ll be in trouble from day one.”

Sir Richard Feachem, director of the University of California at San Francisco’s Global Health Group, founding executive director of the Global Fund to Fight AIDS, Tuberculosis and Malaria, and the event’s moderator, said that one key to implementing policy well is to emphasize it as much as policy development. Policy design, he said, tends to attract the most energetic and capable individuals — “the A-team” — which isn’t always the case with implementation. It’s important, he said, that implementation attract the same level of talent and generate the same focus.

Panelists recommended tackling ambitious reforms, rather than incremental ones, and said that sometimes goals have to be set even when it’s not yet clear how to achieve them. They said it’s important to follow through with implementation until a program or reform is “irreversible” — having generated public support or been integrated into an agency’s culture — and to stay connected where services are actually delivered, something Jowell did by visiting facilities.

It’s also important to understand that policy, once implemented, often will be very different from the original idea that gave birth to it, since it was formed by many sculptors along the way. Consequently, Frenk said, it’s important that credit for a new policy be shared widely, something with which Dukakis agreed.

“Sharing the credit is very, very important,” Dukakis said. “It will pay dividends down the road.”