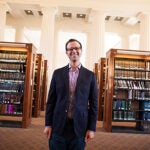 A man of many talents

Two female journalists covering the presidential election in eastern Afghanistan for The Associated Press were savagely attacked in April. Pulitzer Prize-winning photojournalist Anja Niedringhaus and reporter Kathy Gannon were traveling in a protected convoy of election workers when an attacker shot into their vehicle, killing Niedringhaus instantly and gravely wounding Gannon.

The assault stunned their friends and colleagues in the media who knew them as respected, hard-working war correspondents who had spent years in Afghanistan, knew the country well, and were not prone to take foolhardy chances.

Doing a job fraught with routine risks and daily dangers, journalists in conflict zones around the world rarely want to become news themselves, as Niedringhaus, a 2007 Nieman Fellow, and Gannon did when the attack on them was featured on the front page of The New York Times on April 5. The story offered a rare glimpse into the harrowing, uncertain circumstances that women reporting from war-torn areas frequently face.

“It’s a reminder that if you’re doing this job, you might end up giving your life to do it,” said Liz Sly, Beirut bureau chief for The Washington Post and a longtime war correspondent in the Mideast and the Levant.

Times reporter Carlotta Gall has covered Afghanistan since the 9/11 attacks and led the paper’s reporting that won a Pulitzer Prize in 2009. She wrote movingly about a lunch she had with Niedringhaus and Gannon in Kabul just a few days before the attack, and suspects they were targeted simply because they were foreigners.

“Al-Qaida and Taliban have been doing this for years. They think if they kill a foreigner or two, it scares others away, it disrupts things, it makes it more difficult for the government. And I think they were hoping to disrupt the elections,” said Gall, now the North Africa bureau chief for the Times and a 2012 Nieman Fellow.

The attack was a reminder that the job requires constant vigilance, staying under the radar of those who oppose the media or the West, and acceptance that even with experience and precaution, uncertainty always hangs over this work.

“It really pains me because of just the fact that they know so much and they’re so valuable and they’d be so helpful to younger journalists who don’t have that experience,” said Jill Dougherty, former Moscow bureau chief for CNN and a spring 2014 fellow at the Shorenstein Center on Media, Politics, and Public Policy at the Harvard Kennedy School.

“When you go into a zone like that, you literally never know what is going to happen from minute to minute, and that’s why you really have to have your wits about you and be prepared and be thinking ahead about what would you do if …” said Dougherty, who spent 30 years reporting from Russia, Ukraine, Libya, Iraq, and Afghanistan. “I carry that into my daily life.”

“It certainly makes you very careful,” said Gall about the need to travel in groups whose members have been vetted for loyalty and trustworthiness, to avoid cultural missteps or drawing attention to yourself. “But you can never be sure. And so, even though it makes you pause, none of us stopped reporting because of [the attack]. If anything, we want to carry on and do the story in the place of people like Anja and Kathy who risked their lives, so we’ll carry on and get the story for them.”

Risks on the rise

While war reporting has always been dicey work, assaults, kidnappings, suspicious disappearances or imprisonments, and murders of journalists have become more common in recent years

Dougherty said CNN spends a great deal of time and resources on security and logistics, sending reporters through training exercises with former military personnel who are armed and dressed as insurgents and try to kidnap them as explosions are set off, all to prepare them for dangerous field scenarios.

“You’re running on adrenaline. In these zones, you’re often getting four hours of sleep or less a night, easily. So I’ve always found I felt tired, but you don’t really feel the tiredness until you get out of there,” said Dougherty.

Early on in her career, Gall said she found that she could handle the unique rigors of the job, which naturally led her editors to continue sending her on difficult assignments.

“And then over the years, I think I kept doing it because I really believed this was the most important journalism to be doing and that people were dying and it should be reported and people should know the truth of what it was like and what was happening so that better decisions could be made back home,” said Gall, who recently wrote a book about her time as the longest-serving Western journalist in Afghanistan. “I just came to really believe in the importance of good information in times of conflict for all concerned.”

Women now constitute a significant portion of the reporters on the ground.

“What does amaze me is sometimes when I look around a room at a press conference or a front line in a battle zone, there’s an incredible amount of women,” said Gall. “Sometimes in Kabul, all the major papers and news stations had women reporters there. So I think what you’re seeing is a growing number of editors … are realizing that women make very good journalists.”

But it wasn’t long ago that women who wanted to work in conflict zones were often met with astonishment or outright resistance.

“Yes, definitely, we’re much more accepted by men and male editors and the establishment than we were before,” said Sly, who has reported from Afghanistan, Libya, Lebanon, and Syria since the 1980s. “People don’t bat an eyelash now that there’s a woman doing this job, whereas in those days, there was always some kind of slight puzzlement about it.”

Sly recalled once being told by a male editor, as she prepared to head overseas on assignment, that “‘One of the reasons we don’t have women correspondents is because if we send them overseas, they’ll go and get pregnant,’” she said. “And now I know lots of women correspondents who have children and husbands and are also covering this region.”

While the job is dangerous, and sexual assaults against women journalists are a genuine threat, they say they face no greater risks than their male colleagues do.

“When you’re dealing with a war and things go bang and bullets fly, they fly equally in the direction of women as men,” said Sly. The notion that women are more vulnerable feeds “into stereotypes … that women have some special challenges in the field that men don’t have. I’m very much against that perception that somehow it’s extra hard for us because that perpetuates the idea that somehow women can’t do this job, or it’s a special favor to let us to do this job.”

Said Gall: “When it comes to war reporting, I don’t think gender comes into it. I think some people are good at it and some aren’t, and that’s just a personality thing. It’s nothing to do with if you’re male or female.”

In fact, a woman’s presence can often deflate tensions, prompt better behavior among armed men, and in some cases open doors that are closed to male journalists.

“You’re kind of this creature from outer space — you’re not either sex, and you’re not local. So in that sense, they’ll accept you even though under normal circumstances if they saw a woman coming in, they wouldn’t,” said Dougherty.

“Sometimes I’ve found very strict Muslim mullahs or leaders won’t talk to a woman or won’t allow you in their mosques … but on the other hand … you get invited into the family compound, which a male reporter never would,” said Gall. “So you can go and meet the wives and the children, which is an amazing extra advantage on the cultural side.”

“There are people now who will tell you: ‘I’ll take you into Syria, but I won’t take a Western man, because you can wear a hijab and you can pretend to be my sister, but I can’t hide a man,’” said Sly.

Given the instability of the front lines, Gall said one critical and universal skill that all journalists need is to know when to press ahead and when to bail.

“My main maxim is, no story is worth a life. If you are in danger, you should stop and drop the story and get out,” she said. “There’s always going to be another story.”