Religion and the Indian election 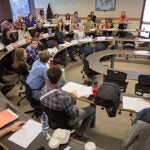 They spring into action

India is choosing a new government. Many pundits predict that the country’s 814 million voters will make Narendra Modi, head of the Bharatiya Janata Party (BJP), the next prime minister of the world’s largest democracy.

Religion is a big factor in the six-week election, which ends on May 12 (the winner will be announced May 16). The (U.K.) Telegraph writes that Modi has exploited religious tensions to grab power, promising to build a Hindu temple on the site of a historic mosque. The New York Times reports that “the ascent of Modi and his Hindu nationalist party has raised concerns that members of minority religious groups would face discrimination if the Bharatiya Janata Party came to power.” The Financial Express cites the U.S. Commission on International Religious Freedom’s concerns about “BJP’s and Narendra Modi’s close association with Hindu nationalist organisations” and with the “ideology of Hindutva, which holds non-Hindus as foreign to India.”

HDS turned to Kalpana Jain, a master of theological studies degree candidate and a former editor at the Times of India, for her perspective on the elections and the role of religion in Indian politics.

HDS: What role has religion played in the BJP’s rise to power?

JAIN: It’s an example of how political parties can exploit religious sentiments and create divisions for political gains. Look at how BJP acquired a base after it launched a campaign for constructing a Ram temple at the Babri masjid [mosque] site, which was destroyed in religious violence in 1992. In the Lok Sabha [India’s lower house of parliament] elections of 1984, the BJP got only two seats. By 1989, following the campaign, the BJP won 85 seats.

It then continued to increase its political base. In 1991, it got 119 seats and in 1998, 182 seats. It retained 182 seats in 1999. Following the Gujarat pogrom of 2002, though, the BJP lost seats. This was an indication that secular Hindus had rejected the BJP for what had happened in Gujarat.

HDS: What’s the significance — both to Hindus and Muslims — of the BJP’s pledge to build a temple to the god Lord Ram on the site of the Babri mosque?

JAIN: There are strong sentiments on both sides. There is a section of Hindus for whom the construction of a temple is part of their Hindu identity, and so is keeping the Babri masjid site intact for Muslims. While the BJP may make election promises for a section of the electorate, it is not likely to carry it out, as it would result in large-scale communal violence.

They will also be rejected by large parts of the electorate. Hindus and Muslims in India have lived together for centuries. Often times, religious sentiments are exploited, either as a way of diverting attention from more pressing issues or as a way of finding a “vote bank.”

HDS: What would the BJP’s election say about the role of religion in Indian politics and society?

JAIN: It would be inaccurate to ascribe BJP’s election to religion. While there are indications that BJP’s prime ministerial candidate, Narendra Modi, is enjoying majority support, there are two main reasons for it.

First, there is an anti-incumbency factor. The Congress Party has been in power for the past 10 years. The last five years in particular were riddled with corruption and the electorate saw the prime minister to be largely ineffective. So, in that sense, it will be a vote against congress.

Second, people feel an absence of strong leadership, and Modi has managed to convince people about Gujarat’s growth, the state where he has been chief minister for four consecutive terms. At this point, people are desperately looking for effective governance, and Modi’s campaign is speaking to that. So, I don’t think this will be a vote for Hindu nationalism. But, yes, caste-based politics dominates Indian elections — and not just in BJP, as inferred in the Western media. All political parties, despite claiming to be secular, play the caste card in the selection of candidates.

HDS: What impact would the election of the BJP would have? Should Muslims be as concerned as the media seems to indicate?

JAIN: At the national level of governance, political parties have to accommodate diverse groups and cater to the plurality of India. Political parties in India cannot depend entirely on the “Hindu” vote, which cannot be seen, in any case, as one cohesive religious group due to different belief systems. India has the second-largest Muslim population of the world, after Indonesia. In some parts of India, the Muslim population is close to 50 percent.

In none of his speeches has Modi played up the religion issue. His emphasis has been on development, women’s safety, and providing strong leadership — issues that are prominent in the minds of people. The BJP has also worked hard at strengthening its grassroots workers’ base, which has also enabled it to mobilize a large voter turnout. None of this is based on their appeal as a Hindu nationalist party. While caste and religion play a role at the local level and in the selection of candidates, it would not work at the national level, purely because of India’s diversity.

The Western media often focuses on a narrow view around New Delhi, whereas there is a wide diversity across India. For instance, the states of Kerala in the south and West Bengal in the east have been traditionally ruled by leftist parties. I do not think that the BJP will do anything that may fan communal tensions, as that would be devastating for India, as well as for their political future. I would be more concerned about more subtle, yet more insidious changes, such as the rewriting of school history text books, which starts to impact minds at a very young age.

HDS: Does Hindutva actually have roots in Hindu teaching and tradition?

JAIN: Hindutva is a political ideology. It is associated with the Rashtriya Swayamsevak Sangh (RSS), a right-wing Hindu nationalist group. Over the years, with the gradual rise of the BJP in Indian politics, this ideology has gained momentum through the BJP, which is the political offshoot of the RSS. The word itself was coined in 1924 by Vinayak Damodar Savarkar, who fought for India’s freedom from the British but also advocated Hindu nationalism.

There are various schools of thought and multiple beliefs within Hinduism. In my experience of religion in India, I experienced an openness in the practice of religion, which HDS Professor Diana Eck describes so poignantly in her book “Encountering God,” as finding her understanding of faith in God’s manyness, while during her work in India. And that is what Hinduism means to me, and I believe, to a majority of Hindus as well.