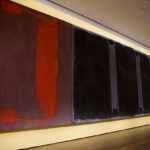 A light touch for Rothko murals

Why does dating have to be so awkward?

There’s so much anxiety surrounding meeting someone for the first time. There’s what to wear, obviously. Then, what to talk about? How much do we reveal about ourselves? And what about those dreaded uncomfortable silences?

In an attempt to circumnavigate or subvert this modern dilemma, Lauren McCarthy discovered that dating doesn’t have to be the hive-inducing stressor we make it out to be. Not with the help of the virtual world to back you up.

For a month, McCarthy went on a series of dates with suitors from the popular dating site OkCupid. She surreptitiously live-streamed the entirety of the dates, seeking the feedback of strangers paid to watch and offer their input.

“Tell him a secret,” one viewer wrote. “Have a bit more excitement and interest,” said another.

If this sounds weird, or perhaps perfectly normal, that’s the point.

McCarthy is an artist and programmer, and life’s uncomfortable moments fascinate her, she admitted, partly because she’s a bit uncomfortable herself.

McCarthy studied computer science and art at Massachusetts Institute of Technology (MIT) and said she was fine in that inner circle of academia and … nerdishness. “But in the real world I didn’t have any social skills,” she said. “I thought, ‘Maybe I can hack my way out of a situation.’ ”

One early project involved designing a hat that detected if McCarthy was smiling — and delivered pain to her if she wasn’t. But more recently, McCarthy’s work has toyed with identity and social interactions and the ways those converge with our dependence on technology.

In a Tuesday lunchtime talk at the Berkman Center for Internet & Society, McCarthy discussed her work with center co-founder and director Jonathan Zittrain and confessed that while her projects deal with larger, dystopian issues, they’re also personal.

“The dates got confusing because I was being myself,” she said of the crowdsourced dating experiment. “But I was also getting these instructions.”

“What responsibility do we have to maintain an acceptable model of behavior?” McCarthy wondered, clarifying that her seemingly outrageous ideas all stemmed from “me thinking about what I didn’t do well.”

In 2010, McCarthy created Conversacube, a box that prompts each user with “directions or lines to keep the conversation running seamlessly with minimal awkward or uncomfortable moments.”

“I’d started to think about getting feedback on conversation,” she said. “We do this all the time in other ways — liking, favoriting, retweeting — but shifted into physical space.”

Then in 2013 came us+, a Google Hangout app “that analyzes speech and facial expression to improve conversation.”

“It’s kind of terrifying to think about,” said McCarthy, “because what if it actually works?”

Her latest endeavor is Crowdpilot, a downloadable app that allows friends, Facebook friends, or strangers to eavesdrop on your activities — be it on a date or a phone call — and send you their feedback.

While her work has been interpreted as humorous and at times invasive, there’s something poignant about her tools, which are focused on creating meaningful connections.

“I’m always trying to make something serious, and earnest, and optimistic,” McCarthy said. But ever the self-conscious MIT grad, she added, “Basically, I’m trying to create my own personal hell with these projects and seeing if I can survive.”