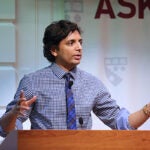 Shyamalan sees problems in the classroom

Saying that “inequality is the root of social evil,” Pope Francis has made economic justice a focus of his papacy. With young Americans turning away from organized faith communities, though, can religion really play a part in progressive social movements, as it did in the 1960s?

Dan McKanan, Ralph Waldo Emerson Unitarian Universalist Association Senior Lecturer in Divinity at Harvard Divinity School (HDS), shares his thoughts on a new report from the Brookings Institution that contends that “religious voices will remain indispensable to movements on behalf of the poor, the marginalized, and middle-class Americans.”

HDS: Last week the Brookings Institution released “Faith in Equality: Economic Justice and the Future of Religious Progressives,” a report that “details the challenges and opportunities religiously affiliated progressives face in building a movement for economic justice.” Do you agree with the authors’ conclusion that religion can continue to play an important role in U.S. social movements, despite younger people’s alienation from organized faith?

McKANAN: There is a lot of potential for religiously unaffiliated progressives — especially millennials — to partner with religious institutions and organizations in working for economic justice. In my own work, I see lots of young people who would be very reluctant to join a religious congregation who are nevertheless comfortable working in task-oriented organizations sponsored by religious or spiritual movements.

You can see this in denominationally sponsored volunteer groups like the Jesuit Volunteer Corps and the Lutheran Volunteer Corps. You can see it in the many young people working on biodynamic farms or Camphill communities, even though they don’t identify with the anthroposophical spirituality that informs biodynamics or Camphill. I see the same pattern in justice work sponsored by classical denominations that I do in groups representing “alternative” spiritualities.

HDS: Do you think the model used by the Civil Rights Movement of the 1950s and ’60s could still be effective in mobilizing people of different faiths, ethnicities, and socioeconomic backgrounds — particularly in light of growing secularization?

McKANAN: The Civil Rights Movement is still a good model for partnership between religious organizations and religiously unaffiliated individuals. Though the report characterizes the movement as an alliance of Protestants, Catholics, and Jews, its religious diversity was actually quite a bit broader than that.

Religious humanists, secular humanists, Unitarian Universalists, and Muslims also played very important roles in the movement. I’m thinking of folks like A. Philip Randolph of the Brotherhood of Sleeping Car Porters, James Farmer of the Congress of Racial Equality, Whitney Young of the Urban League, Malcolm X of the Nation of Islam, and Stokely Carmichael of the Student Nonviolent Coordinating Committee.

These were leaders of some of the most important Civil Rights organizations, and spiritually they all stood outside the mainstream churches. But they were very happy to partner with the organizational strengths of the historic black churches and the Protestant mainline.

HDS: Is there another model that could be as effective?

McKANAN: Well, the Civil Rights Movement occurred at a time of rapid economic growth and unprecedented strength for religious institutions. It was natural in that context for secular progressives to seek out the organizational strengths of religion. The situation today — both in terms of economic stagnation and institutional weakness on the part of religion — is different. We could expect the resulting alliances to have a different flavor, perhaps more reminiscent of organizing in the 1930s than the 1960s.

HDS: Is it possible, as the authors suggest, to appeal to conservatives on the basis of religion to get them “on board” with movements that promote economic justice?

McKANAN: Some religious conservatives can be drawn into movements for economic justice, even though they might differ with religious progressives on issues like abortion or same-sex relationships.

One of the most important arguments in the report is that evangelicals in the global South, and even in other wealthy countries, are often quite progressive on economic issues, and these people may nudge American evangelicals to adopt similar attitudes.

On the other hand, it would be a mistake to assume that the alliance between social and economic conservatives in the United States is only a marriage of convenience. For some — not all — American evangelicals, free-market capitalism is a matter of religious principle just as much as opposition to abortion is.

HDS: Are there precedents in recent U.S. history?

McKANAN: Absolutely. I was disappointed that the report did not pay more attention to the role religious progressives have played in the recent cultural sea change regarding marriage equality and LGBT rights more generally.

The willingness of certain religious groups to embrace and celebrate queer marriages played an enormous role in “normalizing” diverse sexual identities. My own tradition, Unitarian Universalism, has provided especially significant institutional support for marriage equality, and the pace of change has accelerated as larger denominations have joined the cause. The fact of this victory can be a source of hope for those involved in the struggle against economic inequality.