A hand up to a better future 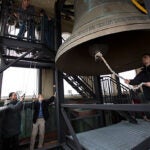 Listen for the bells

Raised in a rough neighborhood, Jesse Sanchez ’14 plans to help others as he was helped

During his four years at Harvard College, Jesse Sanchez has been a continent away from the troubled streets of San Diego’s City Heights neighborhood where he grew up, but in his heart he never really left.

Sanchez, a senior, said the struggles of kids growing up amid poverty, drugs, and gangs have never been far from his mind. Coming from a similar background, he credits his own success to his mother’s tireless work ethic and her selfless dedication to him and his brother, and to the intervention of people working to bring a better future to neighborhood kids.

“I owe everything to her,” Sanchez said of his mother, Julia Sanchez, a housekeeper. “All the work I put in has only been modeled on her hard work. All the sacrifices I made were only modeled on the sacrifices she made.”

A social studies concentrator, Sanchez wants to mirror the dedication that helped him find his way from City Heights to Harvard and help others to succeed despite tough backgrounds.

In fact, he has already begun that work. Sanchez, who lived in Adams House, took a year off to return home and work with Reality Changers, the nonprofit that was instrumental in his own growth. The organization seeks to provide support and resources to put kids from disadvantaged backgrounds on the path to college or, as Sanchez described it, put them in a community of like-minded individuals who have college as a goal.

Here on campus, he has worked to make Harvard a home for people like him, founding the Harvard College First Generation Student Union, a student group that provides support for students who are the first in their families to attend college.

He also spent summers working with high school youth from Cambridge and Boston in the Crimson Summer Academy, which provides mentoring and instruction to help put students on the path to a four-year college.

With Commencement, Sanchez is fulfilling what he once thought was an impossible dream of his own: completing college after growing up in a place where poverty was widespread and drugs and gang violence were “as close as close can be.”

“College was something I thought would be impossible … because there were no examples of people going to college from my neighborhood,” Sanchez said.

He said his Harvard experience has been “paradigm-shifting” and “incredibly full of growth,” giving him the motivation and inspiration to continue to work toward change in places like City Heights. His senior thesis focused on issues raised by his own experiences, both at home and at Harvard, examining what happened with first-generation students attending elite universities.

At 140 pages, the thesis was the longest work Sanchez had ever completed. It provided a capstone to his time at Harvard, which challenged him in a variety of ways, from the snow he encountered that first winter in Cambridge to the intellectual stimulation in the classrooms.

“I felt awe-inspired and enthusiastic about the amazing opportunities here at Harvard,” Sanchez said. “As a freshman, I wanted to make sure I made the most of the opportunity. I always kept my community in mind. … I did not get here alone. Nobody gets here alone.”

Lecturer on Social Studies Chiwen Bao, Sanchez’s academic adviser, said Sanchez was engaged and passionate in the two classes he took with her. They had long conversations about his other activities and, more generally, how to change the community.

After graduation, Sanchez plans to return to City Heights and reconnect with his family and community. He will begin a Fulbright Scholarship to teach English in Mexico next year. After that, he wants to work in education, improving access and helping students reach their full potential — a road he has traveled himself.