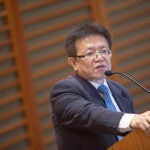 The context of health care for all

Harvard neuroscientists have made a discovery that turns 160 years of neuroanatomy on its head.

Myelin, the electrical insulating material in the body long known to be essential for the fast transmission of impulses along the axons of nerve cells, is not as ubiquitous as thought, according to new work led by Professor Paola Arlotta of the Harvard Stem Cell Institute (HSCI) and the University’s Department of Stem Cell and Regenerative Biology, in collaboration with Professor Jeff Lichtman of Harvard’s Department of Molecular and Cellular Biology.

“Myelin is a relatively recent invention during evolution,” says Arlotta. “It’s thought that myelin allowed the brain to communicate really fast to the far reaches of the body, and that it has endowed the brain with the capacity to compute higher-level functions.”

In fact, loss of myelin is a feature in a number of devastating diseases, including multiple sclerosis and schizophrenia.

But the new research shows that despite myelin’s essential roles in the brain, “some of the most evolved, most complex neurons of the nervous system have less myelin than older, more ancestral ones,” said Arlotta, co-director of the HSCI neuroscience program.

What this means, she said, is that the higher one looks in the cerebral cortex — closer to the top of the brain, which is its most evolved part — the less myelin one finds.  Not only that, but “neurons in this part of the brain display a brand-new way of positioning myelin along their axons that has not been previously seen. They have ‘intermittent myelin’ with long axon tracts that lack myelin interspersed among myelin-rich segments.”

“Contrary to the common assumptions that neurons use a universal profile of myelin distribution on their axons, the work indicates that different neurons choose to myelinate their axons differently,” Arlotta said. “In classic neurobiology textbooks, myelin is represented on axons as a sequence of myelinated segments separated by very short nodes that lack myelin. This distribution of myelin was tacitly assumed to be always the same, on every neuron, from the beginning to the end of the axon. This new work finds this not to be the case.”

The results of the research by Arlotta and postdoctoral fellow Giulio Srubek Tomassy, the first author on the report, are published in the latest edition of the journal Science.

The paper is accompanied by a “perspective” by R. Douglas Fields of the Eunice Kennedy Shriver National Institute of Child Health and Human Development at the National Institutes of Health, who said that Arlotta and Tomassy’s findings raise important questions about the purpose of myelin, and “are likely to spark new concepts about how information is transmitted and integrated in the brain.”

Arlotta and Tomassy collaborated closely on the new work with postdoctoral fellow Daniel Berger of the Lichtman lab, which generated one of the two massive electron microscopy databases that made the work possible.

“The fact that it is the most evolved neurons, the ones that have expanded dramatically in humans, suggest that what we’re seeing might be the ‘future.’ As neuronal diversity increases and the brain needs to process more and more complex information, neurons change the way they use myelin to achieve more,” said Arlotta.

Tomassy said it is possible that these profiles of myelination “may be giving neurons an opportunity to branch out and ‘talk’ to neighboring neurons.” For example, because axons cannot make synaptic contacts when they are myelinated, one possibility is that these long myelin gaps may be needed to increase neuronal communication and synchronize responses across different neurons. He and Arlotta postulate that the intermittent myelin may be intended to fine-tune the electrical impulses traveling along the axons, in order to allow the emergence of highly complex neuronal behaviors.