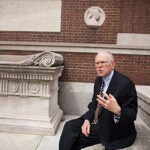 In a sunny room on the third floor of 40 Kirkland St., a satellite building of Harvard’s Graduate School of Design (GSD), three students hunched over a laptop screen. They were peering at a cluster of blood-red dots: a gravity map of petroleum infrastructure in the Gulf of Mexico, including oil rigs, pipelines, and wells.

Final projects are due soon for GSD-DES 9132, an advanced research seminar called “The Oceanic Turn.” The team of three — landscape architecture students Phoebe White and Erin Wythoff and design studies student Adriana Chávez — are investigating how an industrial infrastructure long associated with land is increasingly penetrating into the sea. Their test case is part of the Gulf, the whale-shaped basin to the south of the continental United States that covers more than 600,000 square miles.

“We’re looking at the future,” an era of deeper energy extraction and higher importance for saltwater regions, said course instructor Pierre Bélanger, who was vetting the team’s progress. “They’re mapping the industrialization of the ocean.”

That industrialization, he said, has been underway ever since workers strung a telegraphic cable across the Atlantic in the 1850s. Today, the idea is even more urgent and worthy of study, said Bélanger, in part because of the emerging realities of sea level rise.

A summary report released this month by the Intergovernmental Panel on Climate Change delivered a “very high confidence” warning about the consequences of sea level rise, including submergence, flooding, and coastal erosion.

Bélanger’s students also include a team looking into the “cold chain” infrastructure of the fishing industry. First there is the natural cold climate of the sea, a series of ocean highways that sink and rise and sink again to maintain a nutrient-rich pathway for fish. Then there is the industrial analog that reproduces that cold chain — the ships and land infrastructure that maintain, Bélanger said, “the temperatures of the sea.” (The team, which includes GSD students Maynard León and Kelly Murphy, will present its work later this year at the Woods Hole Oceanographic Institution.)

“The Oceanic Turn” revisits some of the findings by scientists who decades ago started rethinking the ocean-land divide. Students in the seminar read, for instance, selections from marine biologist Rachel Carson’s “Undersea” (1951) and oceanographer Marie Tharp’s “Mapping the Ocean Floor” (1977).

They pondered “Drainage Theories,” an 1867 tract by sanitary engineer George E. Waring Jr. He popularized the idea of separating septic sewage from stormwater runoff, but he also represented an idea that Bélanger said helped to mark the modern age: a feeling that cities should be dry, drained, and filled in to hide their watery backgrounds. In an age of rising seas, he said, cities should instead accommodate the realities of water, a step that someday may include surrendering urban coastlines to rising water or radically reimagining cities as entities that are half water and half land. “I’m not a designer,” said Bélanger. “I’m an un-designer.”

He encourages his students to at least “look at the world as a gulf, or different gulfs,” he said during a project review on Kirkland Street, including “gulfs of extraction” that his students are studying off the coast of Louisiana. That means giving up the intellectually hegemonic “continental paradigm” now associated with industry, said Bélanger, an associate professor of landscape architecture.

The course pushed students out of the comfort zone that conventional metaphors provide for oceans, including that they are sewers (for land effluent and ship trash); mines (teeming with fish); battlefields (for the navies of competing world powers); or an aqua nullius (legally, “belonging to no one”). It also upended the deepest and oldest metaphor, that oceans are vast, unknowable fonts of terror and mystery, “this appalling ocean,” novelist Herman Melville wrote, that “surrounds the verdant land.”

Week by week, Bélanger’s students reconsidered ocean analogies: as ground, as territory, as shoreline, as a place for science and law, as infrastructure, as a cold chain of food production, and as a battlefield. (Bélanger and co-author Alexander S. Arroyo, M.L.A. ’13, have a  book underway that includes a case study of “logistic islands,” the atolls and archipelagos claimed by the U.S. military for its military supply chains.)

One week this month, the students also considered the metaphor of the oceans as landscape, talking with seminar guests Jennifer Baichwal and Edward Burtynsky, Canadian filmmakers, who were in Cambridge for the New England debut of their documentary “Watermark.” The film is a sensual, world-sweeping, impressionistic look at humanity’s links to water, its sources, controls, ecological stresses, and diversity of uses, from farms, waterfronts, and fishing grounds to places of retreat and pleasure — as with surfers at California’s Huntington Beach and worshippers at India’s Kumbh Mela festival. The film’s stars include ice core researchers in Greenland, Chinese abalone farmers, and farmers stranded in the desert delta of the Colorado River, which no longer reaches the sea.

“The Oceanic Turn” is a research seminar, and film is a medium that deserves its place in the academy, said Bélanger. “Video is the new paper.”

The course has a bigger task too, one that is unfolding in other ways at design schools at Harvard and elsewhere. “It’s to turn our attention to the oceans of the world,” Bélanger said. “The wet world.”

The Harvard-Netherlands Project is a binational collaboration on climate change, water, and land development. Its director and principal investigator, Jerold S. Kayden, Frank Backus Williams Professor of Urban Planning and Design, has overseen two related studios since then (Bélanger co-taught one). Kayden has co-taught a spring 2012 course on urban responses to sea level rise, and he organized two conferences last year that touched on urban water challenges: one on public spaces and another on green infrastructure for city parks. “The Oceanic Turn” accelerates a proven theme already at Harvard and confronting the urban world, said Kayden: “living with water.”

Later this year, a multidisciplinary, Harvard-wide Urban Oceans Project will officially launch. “The intention,” said Bélanger, “is to take this oceanic turn, and to do it publicly and visibly.”

Among other Harvard faculty involved in the project: GSD Professor of Urban Theory Neil Brenner, co-organizer of a planned 2015 Radcliffe Symposium on “The Urban Ocean” and lead instructor in a studio this spring on the urbanized Arctic; Rosetta Elkin, the Daniel Urban Kiley Fellow at GSD and a lecturer in landscape architecture; John Gendall, an instructor in urban planning and design who along with visiting GSD professor Henk Ovink is teaching a studio this spring on New England’s coastal vulnerabilities; and Michael Van Valkenburgh, GSD’s Charles Eliot Professor in Practice of Landscape Architecture, who is teaching a studio this spring called “The Ocean State.”

Grasping this new predominance of ocean thinking is big, long-term work, like a huge ship making a “nine-point turn,” Bélanger said. “We have to educate ourselves first.”