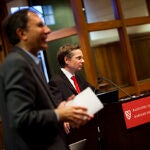 From the cosmos to the cell

By the end of this century, sea levels in the Netherlands may rise more than 4 feet, a troubling prospect in a country where 70 percent of GNP is produced in protected areas that are below sea level.

To cope with the prospect of fast-rising water, two schools of thought have evolved in the nation of vulnerable delta cities: Use engineering know-how to build up dikes and improve pumping technology, or open cities to the sea in such a way that natural systems can co-exist with human habitation.

The second course — call it a “proto-ecological intervention” — is where Harvard comes in. Over the past two years, students at the Graduate School of Design (GSD) have puzzled over what they call the country’s “climate conundrum” in a project funded by the Netherlands.

In a daylong series of studio presentations at Gund Hall on Monday (May 3), the 14 students from the departments of Landscape Architecture and Urban Planning and Design presented their capstone ideas to Dutch officials. Some watched on a trans-Atlantic video link. Others were in low-slung Room B-04, where the four walls were lined with massive poster boards on wheels.

The students, part of a research project led by GSD professors Pierre Belanger and Nina-Marie Lister, focused on Dordrecht, the oldest city in Holland. The historic market city, which is bounded by five rivers, is at risk from more than rising sea levels. It faces sea surges from the west, river flooding from the east, and dramatic subsidence in “polders,” the tracts of land captive within dikes.

One idea already afloat in the Netherlands is to seal Dordrecht behind a kind of super-dike. That would be the culmination of the world-class civil engineering that the Dutch have practiced for more than 500 years. (Per capita, Dutch expenditures on flood defense — 2 billion Euros a year — match U.S. military spending.)

But other Dutch officials are drawn to going beyond traditional dikes and pumps. Closing the city off from any influence of the rivers or the sea is a bad idea, said Ellen Kelder, Dordrecht’s water manager, who attended the presentations along with city planner Judit Bax.

Bring in ecology, she said, echoing some of the Harvard presenters. It’s important to make the seacoast city a kind of plastic entity that will flex with natural rhythms instead of defying them.

The city was part of a Dutch “delta commission” formed after catastrophic seacoast flooding in 1953, said Bax. Last year, a new delta commission was formed to look ahead to 2100. One idea proposed, she said, would be to open up that closed system to the forces of nature, including tides, flood surges, and rising water levels.

The basic idea is simple, said Kelder: “living with water.”

Bring in the issue of energy, she added. After all, Holland’s present flood control structures and pumping systems require almost 100,000 barrels of foreign oil a day, and fossil fuels are finite.

Dordrecht is one of 40 Dutch cities that are questioning the primacy of engineering-only solutions for what they call “flood defense.” By 2015, each city will develop a strategic plan in the national project called “Room for the River.”

The city has teamed with Spanish venture capitalists on the Urban Flood Management Project, part of a bid to be in the forefront of a global conversation on how cities will cope with climate change.

But Kelder still fears that any water safety discussion in Holland will stay focused only on engineering solutions. Instead, she said, “We are looking for a paradigm shift.”

The GSD students had the same game-shifting notion. Their projects looked at a future Dordrecht region. It could be a place where algae are farmed for energy, and where fertilizer-intensive dry-land agriculture gives way to farming mollusks.

It could be “depopulated” as residents are drawn to flood-resilient housing outside the dikes and existing streets alternately become public spaces and flood-control mechanisms.  Why shouldn’t there be fewer people in the city, asked one presentation. After all, in sprawling Dordrecht, 60 percent of the land mass employs only 1 percent of its citizens. Or the future Dordrecht could be a place of “gradient urbanism,” where dikes are expanded to become places to live. Or it could be a place of “climate capitalism,” where the adaptation to sea level rise is the engine for new industries.

One project noted that by the middle of this century, two-thirds of the world’s population will live in flood-prone delta regions. A future Dordrecht that relied on “ecological interventions” to supplement engineering solutions could become a coastal urban template for the world.

Bax, the city planner, liked the sweep of the Harvard presentations, and that they were created by “people from another continent, with a fresh view.”

To summarize and illustrate their complex projects, the students designed and printed a “Depoldering Dordrecht” brochure, complete with faux ads that anticipate a future in commercial concert with the sea. There were ads for estuary-cultivated pearls, “one-stop shopping” for oysters and other bivalves, and a bumper sticker that read: “We [Heart] Floods.”

Of all the ads, said Belanger, “The one for Prada hip boots is my favorite.”

But what can Harvard possibly bring to the Dutch, who have so expertly been holding back the sea for centuries?

“A fresh look,” said Tracy Metz, a Dutch urbanist, architecture writer, and critic who originated the idea of a Harvard-Holland partnership. She was a Loeb Fellow at Harvard from 2006 to 2007.

“The Dutch will always have to pump,” but you can’t only pump, said Metz, especially since many of the hard-engineering solutions of recent decades have come with a steep ecological price. “We want to find new ways of living with water and living with nature.”

The Harvard project might help, said Kelder, calling it a collection of ideas that are smart, innovative, and “beautifully presented.”

But the next step has to be translating these ideas into something that politicians, businessmen, and citizens will understand. “Everyone has to see the benefits. Then we will go there,” said Kelder.

Meanwhile, ideas should be supplemented with a pilot project that interrupts the engineering-only dialogue. “It’s very important to break up the discussion,” she said, sitting near the bright student posters. “And you don’t break up a discussion with just this.”

Metz said the Harvard-Holland project could go into a third year, though discussions are continuing. If it did, GSD students and faculty would deal with issues in Rotterdam, the largest Dutch port.

As for Dordrecht, said Kelder: Two years is a start for a university-government collaboration, but 10 or 20 years makes more sense.

“It’s brilliant what they’ve done,” she said of the GSD students. “Now we need to do something with it.”