Recipe for children’s success spelled out by expert panelists 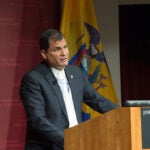 Pathways exist for children to succeed in life, confirmed a group of researchers, policymakers, lawyers, and educators gathered at the Harvard Graduate School of Education (HGSE). However, they acknowledged that obstacles such as poverty, achievement gaps, health issues, and a broken juvenile justice and immigration system may stand in the way.

For 40 years, Children’s Defense Fund founder and President Marian Wright Edelman, one of the forum’s headline speakers, has been a powerful and driving force fighting for struggling children. Among those children was Deval Patrick, a kid from Chicago’s South Side who used education to open his eyes to the opportunities available to him. Today, Patrick is the governor of Massachusetts.

“We have a persistent achievement gap and the kids stuck in that gap are poor,” Patrick said during his introductory remarks. “They speak English as a second language, they have special needs. They are disproportionately black and brown children.

“To have an achievement gap at all is an economic and social problem. You know that. But to let that go for 20 years is a moral question,” he continued. “Those are our children, too — all of our children — and we owe them their best chance. We have work to do.”

During the forum, the authors and editors of “Improving the Odds for America’s Children” (Harvard Education Press) reflected on many of the issues facing children, not only in early education, but well into adolescence and beyond. The book, dedicated to Edelman and commemorating the 40th anniversary of the Children’s Defense Fund, examines critical issues — prenatal and infant health and development, early child care and education, school reform, the achievement gap, vulnerable children, juvenile justice, and child poverty — and highlights crucial practical and policy measures that need to be implemented to better serve American children.

Panelists pointed out that poverty is at the crux of nearly every issue facing children in the United States, noting that even today one child in every three lives in poverty. “It’s harder to get out of poverty than it has ever been,” said Jerry Weast, founder and CEO of Partnership for Deliberate Excellence.

“Early education cannot do its job when a parent is in poverty,” added Arloc Sherman, senior researcher at the Center on Budget and Policy Priorities.

The Rev. J. Bryan Hehir, who moderated the discussion, pointed out that it is easy to talk about what the country needs. But what, he asked, must we do to move forward?

Panelists pointed to necessary changes such as reform of the juvenile justice system; access to and support for early childhood education; comprehensive support services, including job training, for parents; a professional teaching structure; high schools that build pathways beyond a four-year college degree; and educational support for children living with undocumented immigrant parents.

“We’ve known what to do for a long time,” said Smith College President Kathleen McCartney, a former HGSE dean. “What we need in this country is a cultural intervention.”

Senior lecturer Deborah Jewell-Sherman, like many of the forum’s speakers, advocated for a “whole child” approach where all service providers are housed within schools, since schools alone cannot do it all. Services, she emphasized, must be built into the pathway.

California Congressman George Miller, the senior Democrat on the House Education and the Workforce Committee, who joined the forum via video, stressed that while a lot of work has been done, now is not the time to give up.

“The solutions are within our grasp,” he said. “Now, it’s a matter of resources.”