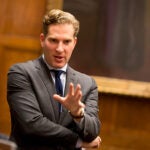 The politics of money

The timely and effective use of social media in the hours and days following the Boston Marathon bombings may serve as a model for other law enforcement agencies in the United States, according to a report published as part of the New Perspectives in Policing Series by the Program in Criminal Justice Policy and Management at Harvard Kennedy School (HKS).

The new report, “Social Media and Police Leadership: Lessons from Boston,” spotlights the ways in which the Boston Police Department (BPD) successfully leveraged its social media platform throughout the investigation to keep the community informed and engaged. The report is co-authored by former Boston Police Commissioner Edward Davis, who is currently a visiting fellow at the Institute of Politics at HKS.

“The Boston Police Department has long embraced both community policing and the use of social media,” the report begins. “The department put its experience to good and highly visible use in April 2013 during the dramatic, rapidly developing investigation that followed the deadly explosion of two bombs at the finish line of the Boston Marathon.”

Davis and co-authors Alejandro A. Alves and David Alan Sklansky identify several key moments following the explosions when the BPD turned to Twitter to communicate critical information. Within one hour of the bombings, they explain, the department had sent out a tweet confirming what had happened along Boylston Street.

“In the ensuing hours, the department used its official Twitter account to request public assistance; to keep the public and media informed about road closures, news conferences, and police activities; to reassure the public and express sympathy to the victims and their families; and critically, within two hours of the explosions, to give the public accurate information about the casualty toll and the status of the investigation,” they write.

The department’s official Twitter account was overseen by BPD’s public information bureau chief, who with the assistance of several others, operated @bostonpolice as a 24-hour “digital hub” for communicating updated information and for correcting misinformation reported by other sources.

“BPD tweets rapidly became the most trusted source of information about the status of the investigation and were often retweeted hundreds, thousands of tens of thousands of times,” the authors explain.

The effective use of social media by the BPD in this case was largely due to the fact that the department had spent considerable time and effort for many years prior to the bombings in building trust with its audiences, Davis and his co-authors explain. In addition to @bostonpolice, the commissioner and his superintendents maintained personal Twitter accounts.

“The promise of social media for policing is not to transform or add to the work of law enforcement but to emphasize the deep connection with the community that has always been the focus of good police work,” the authors conclude. “One of the key lessons of community policing is that effective partnership with the community requires the police not only to talk but also to listen, and social media offer the police such a platform.”

Davis was the commissioner of the Boston Police Department for seven years, retiring in November 2013. Alves, who earned an M.P.P. degree from the Kennedy School in 2012, is a policy adviser and chief of staff in the Massachusetts State Senate and an officer in the Army National Guard. Sklansky is the Yosef Osheawich Professor of Law, University of California, Berkeley, School of Law.

The New Perspectives in Policing series is published in conjunction with the Harvard Kennedy School Executive Session on Policing and Public Safety, a project funded by the National Institute of Justice, Office of Justice Programs, U.S. Department of Justice.

To read the full report, Social Media and Police Leadership.pdf.