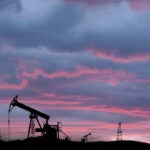 Changing the climate of environmental law

Top women talk about being leaders, and what it takes to get there

How do women rise to the top at The New York Times or Goldman Sachs, or get appointed to the president’s cabinet? They start by knowing who they are and not being afraid to take risks, even if that means failing now and then.

That sound advice came during a gathering of elite women in media, business, and government in what Harvard University President Drew Faust called a “critical conversation” about the changing role of women and the challenges and opportunities they face today.

“What does power require of me beyond a thick skin?” Faust asked in her introductory remarks Monday at Sanders Theatre. “Do women exercise power and, if so, do they choose to or do they have to? Does being a female leader offer someone a special opportunity in any way? Can it ever be an advantage?”

Karen Gordon Mills ’75, M.B.A. ’77, former head of the U.S. Small Business Administration and now a senior fellow at Harvard Business School and Harvard Kennedy School and a newly elected member of the Harvard Corporation, put those questions to panelists Jill Abramson ’76, executive editor of The New York Times; Edith Cooper ’83, global head of human capital management and an executive vice president at Goldman Sachs; and Janet Napolitano, former secretary of the U.S. Department of Homeland Security and now president of the University of California system.

As the Times’ top editor, Abramson talked about her recent decision to lead the front page with two photos and a story about a pair of female journalists who were shot by a police commander last week in Afghanistan while on assignment for The Associated Press.

“I was very moved and, obviously, also extremely disturbed” by the deliberate attacks on Anja Niedringhaus, a Pulitzer Prize-winning photojournalist, and reporter Kathy Gannon, Abramson said. Niedringhaus was killed, while Gannon was gravely wounded.

“I was stirred by their dogged and determined and completely passionate coverage over more than a decade of the story of Afghanistan and the impact of the war we’ve waged there, and also the efforts by people in Afghanistan to overturn the Taliban,” Abramson said. “Here are two women who just were so committed to that story, and I just felt attention should be paid to their work and, unfortunately, their deaths too.”

Women do indeed have different leadership styles and skills from men, the panel agreed, something that should be viewed as a positive for the individual women and for the organizations they lead.

“There’s no doubt in my mind,” Cooper said. “We adapt, we listen, listen, listen; we engage in that listening, which is incredibly important, incredibly powerful. There’s a level of thinking around, ‘What can I learn from that person?’ … and that is hugely, competitively advantageous.”

“I think women are very good — because we have to be — at learning how to navigate,” said Abramson, recalling her earliest days at Harvard College in 1972, as part of the first class of women permitted to live in Harvard Yard. “It was hard to learn how to navigate through such a male-dominated place. It was also tremendous fun and wonderful in many ways, but it was a different culture than I was used to in New York City, which is where I came from.

“The Yard was full of these preppy jocks who … thought the most fun thing ever was to scream out the window … all night long. It was just like, ‘What on earth is going on?’” she recalled. “But little by little, as the year progressed … you kind of learned how to feel a little bit more comfortable in a world that, at least for me, seemed so foreign to begin with.”

Napolitano, who first ran for public office in 1998 in an otherwise all-male race, remembered how the local press treated her gender as a curiosity. “When I announced that I was going to run for [attorney general] of Arizona, I had a reporter call me and ask me, ‘Do you intend to run as a woman?’” she recounted. The question, she said, however laughable, was rooted in the idea that women see the world differently and operate accordingly.

Perhaps the most critical steps that women can take as they pursue leadership roles, the panelists said, are to face difficult tests even when they’re not sure they can handle them, and to shrug off the slings and arrows that come with being a powerful woman.

“It’s really important for you to take discomfort and being uncomfortable as an opportunity to challenge yourself and to learn. That’s not to suggest that I think the path to success is being tortured. I would say step out of the comfort zone because that’s what in my experience what really made a difference. And when you do that, be prepared to make a mistake,” said Cooper. “Because it’s learning from those difficulties that will also be some of the most incredible steps forward in your life and in your career.”

“To become a leader, you have to be your authentic self. You just do. You can spin your wheels and spend an awful lot of effort trying to sandpaper off supposed rough edges other people, especially men,” ascribe to you, said Abramson, who was the subject of a blistering — and some say unfair  — Politico profile last year based largely on anonymous sources who criticized her leadership style.

“I’ve been described as having some very rough edges. And maybe I do, but at the end of the day, to lead you have to make some difficult gut calls, you’ve got to believe in yourself. Not that you’re infallible, not that you don’t sometimes make mistakes or sometimes make hasty decisions, but you have to have a sense of your center and who you are in order to lead,” she said.