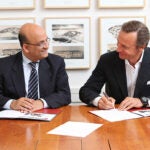 Harvard was recently named a winner of the EPiQS (Emergent Phenomena in Quantum Systems) theory competition sponsored by the Gordon and Betty Moore Foundation. The EPiQS initiative aims to help scientists understand quantum materials in new ways, with a focus on technological applications.

“The Moore Foundation wanted to play a role in developing the next generation of quantum materials, which will lead to a deeper understanding of quantum effects in macroscopic systems, and have possible applications in new types of electronic devices,” Sachdev said, explaining that Harvard was invited to apply for the competition after he and his colleagues attended a quantum materials conference at the Moore Foundation two years ago.

The foundation’s website defines quantum materials as substances that, when subjected to extreme temperatures and pressure, become endowed with unusual properties or “emergent phenomena” such as superconductivity, forms of magnetism, and other electronic qualities. Quantum materials are present in technology many people use every day. For example, Sachdev noted that the memory in iPods is made up of magnetic materials that were discovered by people in his field.

Sachdev said he is delighted by the opportunities the award presents, not only for Harvard, but for quantum physics in general. “I’ve always thought that this field presented some of the most interesting problems in physics, but it’s nice to see a major foundation recognize the importance of it as well,” he said. “It will be nice to have a stable source of funding where all of us will be working together and pushing the next frontier in the field.”