It’s the who, not the what 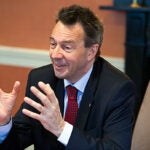 Supreme Court's approval of Michigan ban on academic affirmative action focused on what voters can do, rather than on the outcome of their actions

The U.S. Supreme Court’s decision to uphold the Michigan ban on affirmative action is driving ongoing debates across the country about using race as a factor in the college admissions process, and about what constitutes equal treatment.

“The case is quite complex because now, due to a change in state law, affirmative action based on race is impermissible in Michigan, but affirmative action based on athletics, or legacy, or a host of other factors, remains legal,” said James Ryan, dean of the Harvard Graduate School of Education. “Is that equal treatment or not? That’s a legitimately hard question to answer.”

In 2006, Michigan voters amended the state constitution to ban race as a factor in admission to state universities. Civil rights groups had challenged the amendment as a violation of the U.S. Constitution’s equal-protection clause under the 14th Amendment.

Last Tuesday’s 6-2 Supreme Court ruling (Associate Justice Elena Kagan, a former Harvard Law School dean, recused herself because she had worked on the case while at the U.S. Department of Justice) gives each state’s voters the right to decide whether or not to allow affirmative action as a policy.

The ruling “stands for the unremarkable proposition that what the Constitution permits, it does not also require,” said Ryan. “So while race-based affirmative action is permissible under the Equal Protection Clause, it is not required.”

The court’s opinion, written by Associate Justice Anthony Kennedy, said the case was not about “how the debate about racial preferences should be resolved,” but rather who may resolve it. Associate Justice Sonia Sotomayor, who issued one of the two dissenting votes, wrote a lengthy and critical dissent.

“For members of historically marginalized groups, which rely on the federal courts to protect their constitutional rights, the decision can hardly bolster hope for a vision of democracy that preserves for all the right to participate meaningfully and equally in self-government,” she wrote.

Harvard doctoral candidate Matthew Shaw, the co-author of an amicus curiae brief in the influential case Fisher vs. University of Texas at Austin, said the decision validates voter-initiated affirmative action bans in other states, including California, Florida, and Washington.

“Whether this incites other states to ban affirmative action through voter referenda remains to be seen,” said Shaw.

But the ruling has done little to quell the debate about the elimination of race as a factor in college admissions.

“It’s on a thin edge right now, which from my perspective is a little worrisome,” said HGSE Assistant Professor Natasha Warikoo. “This is part of a larger conversation about this idea that we are living in a post-racial moment. A lot of people think we are and that we shouldn’t need affirmative action, or a way to end inequality is to ignore race. But the reality is that we need to think about what happens when we stop paying attention to race.”

For example, Warikoo pointed out that California, where considerations of race have been eliminated from college admissions, has already shown a decrease in minority enrollment.

Reflecting on Sotomayor’s dissent, Warikoo noted that ultimately the issue is about equal protection of racial groups. “You can still have legacy admissions or athletes can get a leg up, which can increase inequality, but you can’t consider race. It places an undue burden on racial minorities,” she said.

“On a practical level, whether this case ends up being significant outside of Michigan depends entirely on whether other state or local legislatures enact bans on affirmative action in admissions, which is anyone’s guess,” Ryan said.