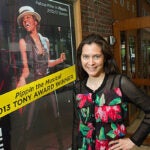 Paulus is among Time 100

For novelist and essayist Jamaica Kincaid, writing is not so much a passion — or a living — as a life force.

“I have this view of writing as something I’d die for,” Kincaid, an African and African American studies professor in residence, said during a panel Tuesday helping to kick off the three-day Harvard LitFest. “I want to write in the way prophets want to do something. I never knew people could become rich writing, but I wanted to write and I just did it.”

Kincaid was joined at the Barker Center’s Thompson Room by Johanna Berkman and Samantha Perry David. The event, titled “Building Lives, Building Careers,” included an audience question for Kincaid on whether she seeks feedback from friends or editors to help with revisions.

“I write something, and then I say ‘This is it.’ I don’t take other people’s advice, but I say ‘Publish it or not,’” she said. “I have a kind of arrogance about my writing.”

Kincaid, a onetime staffer with The New Yorker, was cool to the idea that writers should attempt to please a certain readership. “The idea of pleasing an audience must flee your mind,” she said emphatically. “Write out of conviction,” not for popularity or money.

An audience member wondered about the interplay between a writer’s reading and his or her own work. In response, Kincaid told of how reading Elizabeth Bishop profoundly influenced her own prose poem “Girl.”

“Why would a young woman from Worcester, Massachusetts, have anything to say to a young woman like me from the Caribbean?” asked Kincaid. “But she did. A strong voice from a good writer will always enter your consciousness” and work. “It’s never wrong to be influenced by other writers.”

Kincaid, born in Antigua, has often written about her relatives. She was asked whether writers have any moral obligation when writing about their family.

“When I’m writing, I have no moral obligation to anyone. I will say anything that makes my point. I’m a dangerous person when I’m writing,” she said, pausing as the audience chuckled, “though not so dangerous when I’m not writing.”

Asked for advice to aspiring writers, Kincaid said: “I always say the same thing: Keep reading and writing. The biggest mistake is in believing that somehow your writing must become ‘successful.’ It must be a desire. For all the money you can make, you might as well become a cook or a laundress, but even then, you can still write at night.”

Bret Anthony Johnston, director of Harvard’s Creative Writing Program and co-director of LitFest, said the goal of the festival is “to celebrate Harvard’s vibrant writing community — its past, present, and future. The writing life at Harvard is so rich and diverse, and there are various ways our readers and writers find each other.”

It was recently announced that Johnston had been named the inaugural Paul and Catherine Buttenwieser Director of Creative Writing through a gift from Paul A. Buttenwieser ’60, M.D. ’64, and his wife.

The Buttenwiesers’ gift to The Harvard Campaign for Arts and Sciences will help enhance the creative writing program and elevate the visibility of this important campaign arts initiative.

“Arts are an important part of life and essential to a liberal arts education,” said Buttenwieser, who served as a Harvard Overseer from 2001 to 2007, and is a practicing psychiatrist, novelist, and community volunteer.

Buttenwieser fondly recalled his time as an undergraduate exploring music and writing. “I give to Harvard because of gratitude: I wouldn’t be the person I am today or lead the life I’ve had without Harvard,” he said.

Also participating in LitFest are Jorie Graham, Amy Hempel, and Margaret Atwood, who will receive the Harvard Arts Medal May 1 at Sanders Theatre as part of Arts First.

For a full schedule of LitFest events, visit its website. LitFest is produced by the Harvard Department of English, the Office of the Dean of Arts and Humanities, Harvard Writers at Work, and the Office for the Arts at Harvard. With special thanks to Harvard Review, and the Nieman Foundation for Journalism at Harvard.