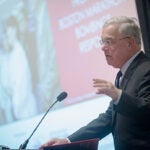 Scholars meet at intersection of wealth and values

For the past four years, the Harvard Divinity School (HDS) Episcopal/Anglican Fellowship has hosted the annual New England Anglican Studies Conference, an academic and ecumenical summit. The theme of this year’s symposium, set for Friday and Saturday, is “Christianity and Capitalism.” The Gazette spoke with Charles Stang, the event’s faculty sponsor and an associate professor of early Christian Thought at HDS, about how Christians can balance their faith and religious values with a capitalist system that aims to maximize profit and wealth.

GAZETTE: What inspired the conference?

STANG: I’m the faculty sponsor of “Christianity and Capitalism.” But the conference really emerged from the passions of HDS students who were involved in the Occupy movements. Our Call for Papers (hdsepisc.org) tries to capture the motivation for the conference, and its aims and purposes. I’m speaking here as a participant, not as a single spokesman.

GAZETTE: Is charity a rare value that melds capitalism and Christianity?

STANG: First of all, “charity” is the Latin translation for the Greek word agape, or “love,” which is found throughout the New Testament, as in “love your neighbor” and “love your enemy.”  In this context, “charity” or agape means to feed the hungry, welcome the stranger, clothe the naked, console the afflicted, and visit the imprisoned (Matthew 25:37-40). Agape is not a vague sentimental affection but a love committed to action.  In the contemporary context, however, charity rarely means this kind of Christian love; more often it comes to mean financial philanthropy, that is, individuals, foundations, and corporations giving away wealth to what they regard as worthy populations in need. I think the worry about celebrating this kind of charity is that it doesn’t fundamentally question today’s economic structures, structures that have resulted in such unprecedented numbers of people living in dire need. So to encourage charitable giving might be one Christian response to capitalism, but it certainly cannot be the sum total response, and it certainly does not “meld” capitalism and Christianity.

GAZETTE: What do wealthy Christians owe their poor counterparts, if anything? Is it ever acceptable for a Christian not to give back to those without? What might Jesus say?

STANG: Let me begin with the last question, about Jesus. The Gospels record various doings and sayings of Jesus that relate directly to the economic order of his own day, which was, in short, a Roman occupation and exploitation of a local population in Palestine, but one in which a local elite benefited as well. Some of the things Jesus said seem sharply critical of wealth: He tells a rich young man to “sell what you own, give the money to the poor; then come, follow me” (Matthew 19:21); he famously overturns the money changers’ tables in the Temple in Jerusalem (Matthew 21).  But [he] also said to “render to Caesar the things that are Caesar’s, and to God the things that are God’s” (Matthew 22:21). In one breath he said that “You cannot serve God and wealth” and that we should “make friends for [our]selves by means of dishonest wealth” (Luke 16:13, 9). How do we make sense of these different sayings?  How do we live by them? There’s no easy answer, but that turns out to be a very good start.

Much of Christian society has sought easy answers to the difficult question of wealth: How much do I have to give away, how much can I keep? What if I give this much to charity, and keep this much for myself, am I all right? Answers to questions such as these seem to be motivated by our desire to be comfortable with our wealth. But if nothing else, the diverse sayings of Jesus seem to push us back on our heels and ask us instead to be precisely uncomfortable with our wealth. Only when uncomfortable with our wealth can we ask more fundamental questions as: Why are we accumulating rather than distributing wealth? What kind of relationship to God and our neighbors can one have when one is accumulating wealth in the face of such evident need? Or to put it in the words of the apostle Paul, what do we have that we have not already been given? And if everything is given to us, what have we a right to keep? I don’t know if this discomfort produces a nice and tidy list of “actionable” Christian values, but they do prompt Christian questions. And I’ve always thought that ethics is best motivated by questions.

GAZETTE: Many argue that capitalism is at direct odds with Christian values. What are your thoughts?

STANG: Christians argue endlessly about what are properly Christian values. But Jesus was unequivocal about two commandments: to love God and to love your neighbor (Matthew 22:36-38). What does it mean to love your neighbor when he or she is struggling to survive, to secure such basics as food, shelter, health care, and education? What does such love call you to do? And what does it say about your love of God when you don’t respond to your neighbor in need, as most of us do not? I speak now as a Christian of wealth and privilege, that is, as one directly implicated. But when I look at our world, I see a Christianity that has cozied up to capitalism, just as when I look in the mirror I see a Christian who has cozied up to capitalism. I take Jesus’ challenge to be a revolution in our stance toward wealth, a revolution from the scale of the individual to the corporate. But I’m no “revolutionary” because I know how I fail to love my neighbor, which is why I feel so conflicted by the question.

GAZETTE: Recently, Pope Francis attacked the “cult of money” and capitalism with the “papal exhortation” and urged the rich to share their wealth. What do you think this challenge to capitalism from the pope might mean in future?

STANG: Like many people, I am encouraged by the pope’s solidarity with the poor and his critique of global capitalism’s use and abuse of so many people. The pope is drawing on a long lineage of social justice work in the Roman Catholic tradition, a tradition that has often felt that it had to fight to be heard among the church’s leaders, who have for years seemed more concerned with policing sexuality. I hope that Pope Francis has provided that tradition, and its counterparts in other Christian denominations such as our own (the Anglican), with encouragement, inspiration, and — so we hope — concrete leadership and action in the world.

GAZETTE: Looking ahead, are there ways Christians can better relate to contemporary capitalism?

STANG: Simply put: Learn about contemporary capitalism and learn about Christianity’s history of collusion with and resistance to oppressive economic structures. Our current economic system, what we call “global capitalism,” is not a given, and it is certainly not working for an ever-increasing number of people. How can it be fixed, or even replaced? Christianity is no monolith: Its history is full of twists and turns. As Franz Kafka once said, “Religions get lost as people do.” I think some of us worry that Christianity has gotten itself lost, and we Christians with it. This conference is a small effort to find our way back again.