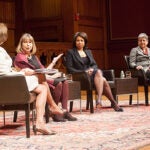 The “swarm intelligence” that guides flocks of birds was evident in the extraordinary response to last year’s Boston Marathon bombings, attendees were told Tuesday at a Harvard-sponsored symposium on leadership lessons from the crisis.

Like flying birds that somehow swerve and change direction as one, Bostonians who took action following the attack on April 15 — from average citizens to government leaders to emergency and public-safety personnel — worked in concert, in a time of great trial, without a central command structure. Out of crisis, order arose.

In a city known for its tribal and political rivalries, how was this possible? And what lessons might be distilled from the experience?

Those questions were at the forefront of a symposium Tuesday at Boston’s Hynes Convention Center. “A Tale of Our City: Meta-Leadership Lessons from the Boston Marathon Bombings Response” drew more than 350 attendees in senior positions in homeland security, emergency management, and trauma care, as well as related fields in the public, private, and nonprofit sectors.

The event was co-sponsored by the National Preparedness Leadership Initiative (NPLI) — a joint program of the Harvard School of Public Health and the Center for Public Leadership at Harvard Kennedy School — and the Metro Boston Homeland Security Region. Participating were many of the frontline leaders from the marathon crisis.

The day began with a message from President Obama, who in a Rose Garden meeting with the World Series-champion Red Sox on April 2 recalled the “selfless courage of everyday heroes” in the wake of the bombings.

“It is wonderful that people have come to see the response as an example of ‘Boston Strong,’ ” said Leonard Marcus, organizer of the symposium and founding co-director of NPLI. “Our goal is to help frame and share the lessons so that other communities can be equally resilient.”

In the months following the bombings, the NPLI conducted extensive interviews with the people who responded to and led the crisis, from the first blast to the capture of one of the alleged perpetrators. An extraordinary phenomenon emerged from that research, Marcus said Tuesday.

“Though many people took charge of aspects of the response, no one was in command of the overall event,” he said. “Beyond that, these leaders set a tone of remarkable collaboration and interagency leveraging among one another.

“Competitiveness, ego-driven behavior, and flamboyant credit-taking — which are often present in large, complex crises that involve many different jurisdictions and organizations — were not significant factors.”

Indeed, the phenomenon at work was akin to “swarm intelligence,” which allows “for remarkable achievements when no one is in charge,” Marcus said, citing five principles researchers discerned in the response to the marathon bombings: unity of mission, generosity of spirit, staying in one’s lane, “no ego, no blame,” and “a foundation of relationships.”

Marathon Monday always has been one of his favorite days of the year, Menino said, but this year’s race will “feel different,” marked by sadness as well as memories of the heroism of “those who got us through those dark times.”

Last year’s “true heroes” were the physicians and nurses in the medical tents who helped save hundreds of lives, Menino said.

He added: “Let us never, never forget what got us through last year: faith in each other.”

For more information about “swarm intelligence,” the preliminary report is available.