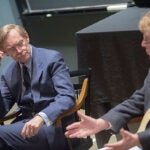 In describing his country’s progress in recent years, Ecuadorean President Rafael Correa made an energetic case in support of his policies during an address at the John F. Kennedy Jr. Forum at Harvard Kennedy School on Wednesday.

Correa, who was first elected in 2006, has faced controversy over his support of Venezuela’s President Nicolás Maduro (and his predecessor, Hugo Chávez), as well as his criticism of Ecuador’s media.

Correa’s speech was preceded with video showing the beauty and stunning diversity of Ecuador’s natural habitat, and punctuated by visual highlights of the state’s achievements during his tenure.

Between 2007 and 2013, Correa said, 1.13 million Ecuadoreans were lifted from poverty, and the incidence of extreme poverty fell from 16.9 percent to 8.6 percent, while growth averaged 4.2 percent per year. The country also claims the lowest unemployment rate in the region, 4.1 percent, and according to a U.N. development report it is one of three countries with the greatest upward mobility.

Correa made no apologies for his socialist policies, claiming they had achieved success where the “long and dark period of neo-liberal policies” had not.

“For us, labor enjoys supremacy over capital,” Correa said. “The great challenge facing humanity in the 21st century is to achieve the supremacy of human beings over capital with societies dominating markets, not markets dominating societies. The market is a wonderful servant, but it is a terrible master.”

Correa also touted his political party’s role in bringing stability to the country after a decade of turmoil in which it saw a half-dozen heads of state. The party has won 10 consecutive elections, Correa said, and enjoys an approval rating of about 80 percent.

“Democracy has been firmly established in Ecuador,” Correa said. “Not only democracy in the formal sense, but real democracy, in terms of people’s access to rights, equal opportunities, and dignified living conditions. This is the so-called ‘Ecuadorian Miracle.’ ”

Correa’s Harvard stop was part of a larger tour of the United States, which will include additional universities, including the Massachusetts Institute of Technology and Yale.