Changing the climate of environmental law 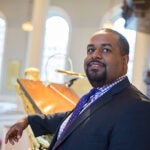 A God of heft

After the Deepwater Horizon oil spill in the Gulf of Mexico and the ensuing reorganization of the Department of the Interior, Frances Ulmer, a member of the National Commission on the BP Deepwater Horizon Oil Spill and Offshore Drilling, turned to Harvard Law School’s Emmett Environmental Law and Policy Clinic. She asked the clinic to recommend best practices for regulating offshore drilling. “I leapt at the opportunity,” says Wendy B. Jacobs ’81, clinical professor of law and director of the clinic, who chooses complex projects that will challenge her students and provide opportunities to present their work to high-level officials — opportunities they would get nowhere else. “It was timely, and presented a novel and critically important set of issues.”

In a single semester, three students under Jacobs’ direction analyzed 40 regulatory regimes and traveled to Washington, D.C., to present recommendations to the Department of the Interior and congressional staffers. They did such a remarkable job that last year, the clinic was asked to consider ways to predict whether companies proposing to drill for oil and gas in the Arctic would do so safely and in an environmentally protective way.  A new group of students worked with Jacobs to develop such a set of indicators. Their report, released in December, suggests ways to protect the environment from the impact of routine drilling as well as major oil spills, and is currently being circulated among legislators and regulators. They’re not the only ones headed to D.C. This spring, in a course on advanced environmental law taught by Richard J. Lazarus ’79, the Howard J. and Katherine W. Aibel Professor of Law, two dozen Harvard Law students spent four weeks studying the record and briefs in an environmental case pending before the U.S. Supreme Court, traveled to D.C. to attend the oral argument at the court, met immediately after the argument with  Chief Justice of the United States John G. Roberts Jr. ’79 to discuss oral argument and decision-making at the court, and then went to a meeting at the U.S. Department of Justice with  Solicitor General Donald B. Verrilli Jr., who had argued the case before the Supreme Court that morning. “The idea is that you don’t just read a Supreme Court opinion here at Harvard Law School,” says Lazarus, who has argued 13 cases before the high court and served as counsel in more than 40 cases at the court, including one related to the case they are studying. “You actually immerse yourself in the process that leads to those decisions because that teaches so much more.” And last month, Kate Konschnik, director of the new Environmental Law Program Policy Initiative, who wrote a fracking-related report on the failures of the voluntary chemical disclosure registry, FracFocus, was in Washington, D.C., testifying before a federal task force on how the registry should be improved if states will be relying on it.

Having that level of influence and access is the hallmark of the HLS Environmental Law and Policy Program (ELP), founded and directed by Jody Freeman, LL.M. ’91, S.J.D. ’95, the Archibald Cox Professor of Law who served in the Obama administration as counselor for Energy and Climate Change. “One of my goals is to be the very best program in the world for environmental law and energy law and climate law, and that means training our students better than anyone else and equipping them to go out into the world and engage on these issues,” says Freeman. HLS did not have a particular focus on environmental law before Freeman. Now, the ELP has become an internationally recognized leader with three intersecting parts: the academic side with world-renowned faculty and innovative courses, an unparalleled clinical program that gives students hands-on training in real cases, and the new Policy Initiative, which provides nonpartisan legal analysis and policy advice to federal and state agencies, and currently is focused on fracking and state clean energy laws. With the recent addition to the program of Lazarus and Konschnik, the former Chief Environmental Counsel to U.S. Sen. Sheldon Whitehouse (D-R.I.), Freeman has assembled what she calls her “dream team.”