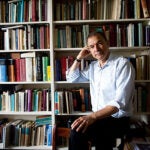 These days, observed Giuliana Bruno, we are surrounded by screens: TV screens, computer screens, tablet screens, screens as big as the facade of a building and as small as the one on your smartphone.

If the medium is the message, as Marshall McLuhan famously said, the screen as medium has become so pervasive in the modern environment that one can lose sight of where the virtual ends and the real begins, noted Bruno, a professor in the Department of Visual and Environmental Studies (VES).

Bruno is also the author of “Surface: Matters of Aesthetics, Materiality, and Media” (University of Chicago Press). Available in May, “Surface” will offer an “archaeology of the screen” as a medium.

Bruno said her aim is to view cultural phenomena using an object that originated as a device for filtering light as a prism. To understand the book’s true scope, Bruno promises to expand on the subject during the opening lecture at the Harvard Film and Visual Studies Department’s inaugural graduate student conference on Thursday. (The 5 p.m. keynote will be held in Room B-04 of the Carpenter Center for the Visual Arts, 24 Quincy St.)

“We think of the screen as something incredibly modern and technological and connected to the Internet or our computers and our telephones,” she said in a recent interview. “But actually the word ‘screen’ precedes by far the invention of any of these devices.”

She said the word first appeared during the Renaissance to describe an object from the world of architecture and design, a piece of fabric stretched on a frame to filter light from a window, to offer protection from a fireplace, or to divide private from public space in a home.

At the end of the 19th century, she said, the screen became something to project movies on, at the same time retaining “that sense of the filtering of light, of a play of light and shadows,” of being a “particular surface where you mediate relationships.”

“Think about the way we use screens now,” she said. “Screens are touchable. They are real objects. Most spectators who go to the film theater are not even aware there is such a thing as a screen. Sometimes we use the computer and think of the image we’re seeing, but we don’t think of this medium, this very important surface that creates forms of connections and relations, but also reveals and conceals.”

She said the screen once was an “optical toy” that could redirect light or bring it to life through animation. The old magic lantern shows and phantasmagoria that seemed to make specters appear “are very much a part of this particular history” and “live on in the way we use our screens today. We’re both touched and can touch images through these forms of multiple animation.”

The screen that had its origins in architectural design still very much transforms our space, and as in the phantasmagoria of old, makes visions appear and seem real and then disappear. “Sometimes I think the past dreams the future,” Bruno said.

The conference at which Bruno will speak is the first organized by graduate students of the Film and Visual Studies Department in the Graduate School of Arts and Sciences. Titled “Process: In Medias Res,” the event sprang from an interest in the distinction between the ways in which a scholar or an artist or a writer practices his or her craft, said one of the organizers, Zachary Furste, a third-year Ph.D. student in film and visual studies.

Examining “the idea of process, the way things happen,” can be more illuminating than simply looking at the final results, Furste said. “You can see the investments of the people [doing the work] and the different kinds of skills and technologies that don’t exactly manifest in a finely polished product, but that are nonetheless essential.

“We’re very interested as a program in thinking about aesthetic practice — making art, making films, making installations and sculptures and paintings — and how that is similar to, different from, or connected to, scholarship, and writing history and theory,” he said. “Process is a really good way to draw this comparison.”

He said he and his colleagues in visual and film studies are engaged in “thinking about possibilities that come with changes in technology and in the way we make meaning and trade images or stories in society.” Thirty papers will be presented at this inaugural conference.

“We’re very interested in sharing our ideas,” Furste said. “Ours is a young but extraordinarily exciting program that has a lot of potential. We welcome people to see what we’re able to do.”

The “Process: In Medias Res” runs from April 10 to 12 at the Carpenter Center for the Visual Arts. View a schedule.