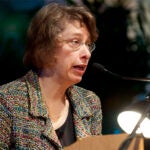 On a recent afternoon, three Harvard conservators perched on ladders and scaffolding to apply final touches to an artistic treasure that has been largely unseen for decades. Soon that will change.

When the renovated and expanded Harvard Art Museums reopen this fall, the evocative 10- by 5-foot fresco will be displayed for all to see in a first-floor gallery.

“To have the opportunity to tell the story of what is fresco — and this moment in art history, and this social statement — because we have a work like this … was important to us as a teaching museum,” said Mary Schneider Enriquez, Houghton Associate Curator of Modern and Contemporary Art, about the efforts to ensure that the piece secured a visible spot in the museum’s permanent collection.

The work was created in 1933 by Harvard graduate and realist painter Lewis Rubenstein and his collaborator, Italian-born artist Rico Lebrun, as a teaching tool for students eager to observe firsthand the art of fresco painting. It was completed in a fourth-floor studio in the Fogg Museum. Once that space was turned into a conservation lab, the fresco received few admirers, aside from museum employees and the occasional curious student or instructor. The public could visit the mural, but only if they knew where to find it.

Now art lovers will no longer have to search for the vivid work, an example of the true fresco technique — a delicate process of applying water-based paint to wet plaster — and a dramatic reflection of the times. Soon after returning from Italy, where he had studied the painting method with Lebrun, Rubenstein took part in a hunger march on Washington in 1932. The mural’s stark images depict the plight of protesters who rallied to demand federal relief for workers and veterans during the Great Depression. The work also portrays the brutal police response.

Next to an image of a truck with the words “On to Washington for jobless relief,” the fresco shows men huddling together on the ground for warmth. Nearby, two men lie side by side, struck by a stick in an anonymous hand. In another panel, a police officer on a horse holds tightly to his baton.

Last week, the conservators were working with surgical precision. Conservation Fellow Dina Anchin wielded a small scalpel to gently clear a protective residue from the mural’s surface. Nearby, Kate Smith, projects painting conservator, injected a syringe containing sealant, a viscous liquid that quickly hardens and holds the crumbling plaster together, into a crack in the mural’s façade.

Using a more traditional brush, Teri Hensick carefully “inpainted” small white dots on the horse’s tail with watercolor. The process, explained the museum’s conservator of paintings, is simply retouching areas that have suffered paint loss over time. “Our goal is only to fill what’s lost, not to cover any pigment that remains of the original … to make what’s left completely legible again.”

Those finishing touches were some of the less complicated steps for conservators and museum staff who began work on the mural in 2010, when they had to decide how best to preserve the fresco during construction.

Ultimately, they chose to extract the entire wall, including a structural beam, instead of using the riskier method of peeling the skin of the fresco away from the wall’s surface. “There are lots of different ways of moving a fresco,” said Hensick, “but we chose the least dangerous one for the work of art, which is to take the whole wall.”

Preserving the delicate façade during the move was a separate matter. On the scaffolding, Hensick pointed to a shiny metal containing the organic compound cyclododecane. When heated, the crystalline material turns to a white, waxy mixture that can be then spread on a fresco’s surface.

After the team members covered the fresco with cyclododecane, layers of cheesecloth, a marble seal consisting of Mylar and aluminum, and a coating of polyethylene foam, they sealed it in a plywood and steel casing. Workers then lifted the 5,000-pound wall by crane through the roof and placed it on a truck, where it was wheeled to Boston for safekeeping. In 2012, workers brought the mural wall back through the front door.

When conservators removed the artwork from its casing, they watched as the cyclododecane slowly disappeared.

“The really great thing about cyclododecane,” explained Hensick, “is that it sublimates away when it comes in contact with oxygen. You can’t tell that it was there, but there was a 3/8-inch layer on this for two years.”

In addition to its vivid depiction of a critical time in U.S. history, the fresco is one of very few in this area, making it an important addition to the museum’s permanent display.

“It’s an important, really interesting work, and for me it’s a fascinating work because it’s a fresco, and there are so few of them,” said Hensick. Although almost “no one knew it was there … now it’s completely accessible to the public.”