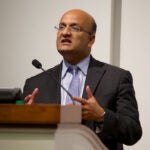 Harvard Divinity School (HDS) Professor Ousmane Kane’s work focuses on Muslim globalization and the history of Islamic religious institutions and organizations. His book “The Homeland Is the Arena: Religion, Transnationalism and the Integration of Senegalese Immigrants in America” looks at the community of the Senegalese who came to New York and the importance they assign to their religious communities.

Kane will deliver an inaugural lecture on Thursday at Harvard Divinity School to celebrate the Prince Alwaleed Bin Talal Professorship of Contemporary Islamic Religion and Society. He spoke with HDS Communications recently about his work and the transformation of Islamic identities.

HDS: In a recent Harvard Divinity Bulletin interview, you stated that until recently, “90 percent of books published on Islam dealt with the Arab world, yet Arabs represent only 20 percent of the global Muslim population.” Why do you think that was the case, and what has changed?

KANE: Up until now, major university presses in the United States and Great Britain published disproportionately on Islam in the Middle East. The decision to consider a book for publication is partly a commercial decision (Will this book sell?). All other things being equal, an editor at a major university press is more likely to be interested in a book dealing with the Muslim Brotherhood in Egypt or Syria (assumed to sell many more copies) than in a book dealing with Sufi Muslims in Guinea or Burkina Faso. Worthy of note, however, is that there is a growing body of published works on Muslim communities in the West that deal with Muslims from the whole world, including the so-called periphery of the Islamic world.

HDS: How did you become interested in issues of diaspora and transnationalism?

KANE: The initial focus of my research was Islam and Muslim societies in Africa. A decade or so ago, it became obvious to me that African immigrants in the West were making a major impact in the development of their homeland. I came to the United States in 2001 to study Senegalese immigrants and their relationships with their country and with other Muslims and non-Muslims in the United States. That is how my interest in the study of Muslim globalization — and more generally of diaspora and transnationalism — started. Tens of millions of Muslims have settled or were born in Western countries in the last three decades. This is unparalleled in history and raises a number of challenges for host and sending societies.

HDS: In your research of Senegalese immigrants in New York, how big a role did religion (Islam) have in the process of settlement?

KANE: The neighborhoods where Senegalese and other Muslim immigrants from French-speaking West Africa settled in the mid-1980s were exposed to high criminality. Given that the majority of these immigrants entered the United States with a tourist visa and overstayed, the process of settlement was far from easy. Many had been attacked, and a few dozen murdered in the 1980s and early 1990s.  In response to prevailing insecurity, they created a variety of self-help associations based on nationality, gender, ethnicity, sect, etc., to support each other. Muslim societies provided to these immigrants emotional safety and some material support. These societies also strove to build strong relations between these immigrants and their homeland, hence their appeal to the first generation of immigrants.

HDS: You stated that, for the first generation of Senegalese immigrants, their relationship with America was ambiguous because they were excited about the new opportunities that the United States provided, but cautious about their children becoming too “Americanized.” Are they fearful their children will abandon their religious roots?

KANE: Yes, they are. Vertical transmission of religious beliefs is always a challenge for immigrants who settled as a religious minority. Add to that the decline of the practice of religion in Western societies in the late 20th century. So parents — even if they are not very religious — are concerned that their children might desert religious and other homeland cultural norms.

HDS: You mention that there is a crisis in gender relations in these immigrant communities, and one reason is because women are sometimes making more money than men — in hair braiding, for example. How pervasive is this crisis, and do you feel it crosses generations?

KANE: As they joined the labor force and sometimes earned higher incomes than men, women questioned inherited gender norms, particularly those pertaining to the division of labor in the domestic sphere. This was one of the many causes of the crisis of gender relations that resulted in high divorce rates among Senegalese immigrant couples. But over time, even some first-generation immigrant men and women have become more flexible and have adopted more egalitarian gender relations. Although I have not yet researched enough the second generation, I surmise that their gender ideologies and practices differ from — and are thus more egalitarian than — those of their parents.

HDS: You used a phrase in that interview that I found fascinating: “the scientific study of religion.” Can you explain what you mean by that?

KANE: I now realize that this notion is a bit problematic. What I meant is an academic, non-sectarian study of religion — submitting scriptures to critical inquiry and using tools of the social sciences — as opposed to a sectarian religious education, which I received earlier in my life. But I am of course aware that social science research does not carry the guarantee of truth and objectivity.

HDS: You said that Islam in sub-Saharan Africa has been a marginalized field in Islamic studies. Is that still true, or is the field of study in academia growing?

KANE: The field has grown tremendously in the last decade. A few international journals on African Islam have been established. One major publisher in Islamic studies in the Netherlands has created a series on Islam in Africa and published a dozen monographs. But our field is ghettoized. Scholars in the field may engage the work of experts of Middle Eastern Islam, but experts of Islam in North Africa or Egypt or South Asia still do not engage our work in any significant way. The good news is that a few universities in Europe and in the United States have established positions in African Islam in recent years. This will hopefully contribute to give to the field greater visibility.

HDS: How important is it for you to approach your work from an interdisciplinary perspective?

KANE: Two types of approaches have dominated the field of Islam and Muslim societies in Africa. On one hand, there are Islamicists who focus on the study of ideas, texts, theology and history. On the other hand, there are social scientists with no linguistic competence to study the scriptures who focus on the recent period and who study state/society relations and the role of Muslim notables in politics. Each of these two approaches has its strengths, and their combination through an interdisciplinary approach provides an interesting perspective.

HDS: What kind of relationship do you have with the Prince Alwaleed Bin Talal Islamic Studies Program at Harvard, and is there something about the program that you feel makes it unique compared with other similar centers across the country or world?

HDS: What are you working on now?

KANE: I am working on the transformation of Islamic identities in the Sahel, looking particularly at transnational jihadi movements. I will teach “Religion and Political Violence in the Sahel” in the fall of 2014. Jihad movements in northern Mali and northern Nigeria have attracted media attention because of the operations they are conducting. They defeated the Malian army and occupied two-thirds of Malian territory in 2012. In northern Nigeria, the most powerful army of Africa has not been able to suppress the Boko Haram insurgency in the last few years. Are these countries the exception in West Africa, or are they just the tip of the iceberg? That is what I am investigating now.