The leadership of Cesar 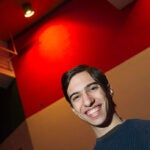 The star, known for his roles in “Elysium,” “Y Tu Mamá También,” and “Milk,” spoke about honoring the legacy of Chavez, the Mexican-American labor rights leader whose protests and strategic campaigns helped to unionize Hispanic and Filipino farmworkers in the 1960s and ’70s.

“I was surprised and a little shocked that there were no movies about Cesar Chavez,” said Luna, discussing his motivation to undertake the biopic. “And I was shocked about the hypocrisy around issues about where food comes from and who’s building this country. I thought by celebrating one of the stories of this community, we could also bring the attention to what matters today.”

Luna said he felt even more connected to the struggles of the Mexican-American community following the birth of his son in the United States. Luna’s rendering of Chavez, played by Michael Peña, shows a devoted activist but an absentee family man.

“This is the story told by the family,” said Luna, who met with Chavez’s children and widow. “What makes him a unique person is that he gave away something I’m not willing to do, which is being with my kids.”

The event was sponsored by the David Rockefeller Center for Latin American Studies’ Mexico and Central America Office and Program, ARTS@DRCLAS, CANANA, the Boston Latino International Film Festival, and the Committee on Ethnicity, Migration, Rights.

Following the screening, Luna and producer Pablo Cruz spoke with Harvard students in a panel discussion with Marshall Ganz, senior lecturer in public policy at the Harvard Kennedy School. Ganz left Harvard College in 1964, a year before graduating, to pursue civil rights activism in Mississippi, before joining Chavez and the United Farm Workers in 1965.

In a somber moment, Ganz rebutted several aspects of the movie. For instance, he said it glossed over the meticulous planning involved in the Delano Grape Strike and Chavez’s 300-mile march to Sacramento. He told Luna he wished there was more focus on Chavez’s “strategic genius, his capacity for creativity.”

“This film made me sad. He’s almost a cartoon,” said Ganz. “When I met him, he was reading Churchill. He knew how to weave the Mexican, the Catholic, the revolutionary traditions. He was an organizer, above anything else, and he fueled progressive politics for many, many years to come.”

Luna agreed, but countered that it was unfair to ask a film to cover everything. “This is still so fresh for so many that it’s difficult to achieve,” he said. “You only have an hour and 45 minutes.”

“For me, this is about teaching,” lamented Ganz, who acknowledged that “Milk,” the biopic about the openly gay politician Harvey Milk, was the closest film he has seen to capturing the momentum and political change of an era. “There are lessons here that are incredibly important for this generation.”

Being the director was a struggle, Luna said earlier. “It’s when I’ve had to use my actor skills more than anywhere else, when you have to pretend you know everything. And then you go home and go to bed and realize you cannot sleep because you don’t know what’s best. It’s a struggle of fighting with your fears, and you lose hair, but at the same time it’s very intense in a very good way.”

Filming in the Sonoran Desert, often with temperatures soaring to nearly 120 degrees, Luna said he was conscious not to romanticize the plight of farm workers against the idyllic backdrop. “You go to the fields, and it looks amazing. They are huge, the green is very green, the light of the desert is very sharp, the blue of the sky is beautiful, and there’s the feeling of being so tiny in a huge place,” he said.

He also employed real farm workers, because “it was easier for us to explain to a farm worker how to do film than to explain to an extra how to have the face of someone who has been exposed to the sun, the wind, and the dust for so many years.”

Luna, who divides his time between Los Angeles and Mexico, said of telling the story of Chavez, “Nothing has been so personal in my life.”