The bright side of Pakistan 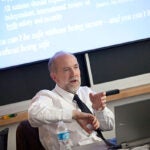 The initial idea was a lecture by a noted Harvard design professor and a quiet discussion with a small group of interested local partners.

By January, however, the event had grown into a three-day conference on South Asian cities, attracting upward of 800 people, with concurrent sessions in large tents erected for the occasion in the Pakistani port city of Karachi.

In addition to a Harvard delegation of seven, the conference drew urban design professionals, government officials, and academics from across Pakistan and elsewhere in South Asia, including India and Bangladesh. Tarun Khanna, director of Harvard’s South Asia Institute, said the event grew through regional collaboration and was symbolic of a “narrative of peace” that seeks to counterbalance the history of strife in the area.

Organizers said the conference was just the initial discussion in what they hope will be an ongoing conversation about the problems and opportunities confronting cities across the region. Further, officials at Harvard’s South Asia Institute (SAI) say the conference is both part of the Institute’s growing engagement with Pakistan and a sign of the enthusiasm of Pakistani partners for further collaboration.

SAI’s engagement is multifaceted and includes conferences and training programs in Pakistan, workshops, fellowships, and Pakistani students on Harvard’s campuses, as well as webinars spanning both locations, featuring Harvard faculty in Cambridge and viewed by students at dozens of Pakistani universities.

Meena Hewett, executive director of the South Asia Institute, said the Pakistan programs are an expression of the institute’s focus on India, Pakistan, Bangladesh, Sri Lanka, Nepal, and Bhutan. Though India is the region’s largest country, it’s important, Hewett said, that the institute promote an agenda that encompasses all of South Asia.

In addition to fostering an understanding of the country itself, Pakistan has a lot to offer to the regional dialogue, Hewett said. Pakistan is the world’s sixth-most populous nation, with a long history and enormous diversity. It is struggling with many of the same issues as many of its neighbors, including urbanization, poverty, water security, public health, religious differences, and governance.

“Beyond the narrative of violence and terrorism, there is all this good development work going on,” Hewett said.

Rahul Mehrotra, chairman of the Graduate School of Design’s Department of Urban Planning and Design and one of the January conference’s organizers, said that studying the region’s cities not only has the potential to generate knowledge, it is also a cross-cutting issue that fosters interdisciplinary collaboration among faculty members and provides a forum for cooperation by experts in different nations.

The conference was the first of five planned over the next five years, Mehrotra said. The next conference is tentatively planned for Dhaka, Bangladesh.

South Asia’s cities have a lot to learn from each other. While urban areas around the world are struggling with the same problems, the cities across South Asia share a “similar DNA,” Mehrotra said. That DNA has been instilled by shared regional history, including British colonization and enormous urban growth in the post-independence era. Among their commonalities, the region’s major cities are among the world’s largest, have undergone rapid demographic change in the last 30 years, and suffer from poor infrastructure and services, as well as a lack of political will to transform, Mehrotra said.

That means lessons learned from South Asian cities might be easier to adopt than lessons learned in other parts of the world, Mehrotra said. Karachi, for example, has done some path-breaking work to improve its slums, while Mumbai has well-functioning conservation legislation that can be easily replicated. And low-lying Dhaka has experience dealing with its physical environment and climate change.

Jennifer Leaning, the Francois-Xavier Bagnoud Professor of the Practice of Health and Human Rights at the Harvard School of Public Health, delivered a keynote speech at the January conference on climate disasters and vulnerability, and participated in two other panels on disaster response and mental health. With funding from the Karachi-based Aman Foundation, Leaning is involved in a project to improve that city’s disaster preparedness and disaster-related mental health. Late last year, two Harvard Medical School faculty members conducted needs assessment and a training program in emergency preparedness for staff at Karachi hospitals.

The unsteady security situation in parts of Pakistan means that these projects are being conducted by faculty members, fellows, and graduate students. The U.S. State Department’s categorization of travel to Pakistan as “high risk” means that undergraduates can’t participate in Harvard-sponsored trips there.

While the ongoing unrest continues to make headlines, Hewett and others involved in Pakistan-related programs said that, in a nation of 190 million, many are unaffected by the violence, and there are many positive things going on outside the “narrative of terror.”

Justin Stern, a GSD student who is working with Mehrotra on the cities project, said he had no problems traveling from Lahore to Faisalabad to Karachi in the week before the conference. Though he was at first wary, he said he felt welcome and eventually comfortable traveling alone.

Muhammad Zahir, a Pakistani archaeologist studying at Harvard this spring as an Aman Fellow, said that among the positive changes lost in the violence narrative is the fact that Pakistan’s public universities have been growing in number, as have the number of female students.

“Life in Pakistan goes on despite these difficulties,” Zahir said.

For Zahir, studying for four months at Harvard is the chance of a lifetime, though not his first involvement with Harvard. He cut his teeth as an archaeologist at the Harappa dig in Punjab, headed by the director of Harvard’s Zooarchaeology Lab, Richard Meadow. The project has trained dozens of Pakistani archaeologists in the latest field techniques, Zahir said.

Though he enjoys fieldwork, Zahir said his fellowship project is more desk-oriented. He’s using Harvard’s library resources to conduct what he terms a “genealogical analysis,” looking into history to understand the influence of the ancient Aryan people in modern Pakistan.

For doctoral students Erum Sattar at Harvard Law School, and Mariam Chughtai at Harvard’s Graduate School of Education, both of whom come from Pakistan, fostering greater engagement with their home country and a more vibrant ex-patriot community at Harvard is an important part of their experience here. Both are student coordinators of the South Asia Institute and have played a key role in Pakistan-related projects there. They have also filled important roles with the Harvard Pakistan Student Group, Chughtai as founder and Sattar as the current president.

The two said the student group has proven an important resource for activities both here and in Pakistan. The organization has fostered a network not just on campus but in Pakistan as well, by engaging Harvard’s alumni community there.

Sattar and Chughtai said Harvard has an important part to play in Pakistan’s future. Not only can the University conduct the research and teaching activities that are its core purpose, it can exercise its convening power to bring together people from across the region.  Through the webinars, the University can foster communication between institutions within Pakistan.

“The first webinar, conducted on spurring entrepreneurship, under the auspices of the Higher Education Commission, brought together faculty, students, and interested well-wishers across 19 university campuses in Pakistan via video link. Since then, we have run webinars reaching universities across South Asia on innovation in education, fighting corruption, tackling gender violence, and the changing role of engineering to address societal needs in the 21st century,” Khanna said. “This helps to build a constituency for Pakistan-related work in the country.”

Chughtai said the webinars and the January conference testify both to SAI’s interest in Pakistan, and to a new perception of Pakistan as a leader in tackling the region’s problems.

“Pakistan, for the first time in a long time, is taking the lead on something to benefit the subcontinent,” Chughtai said. “The Karachi conference is the first step toward regional collaboration.”