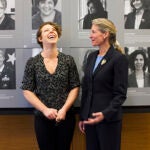 Lawyers outline ways in which legal system there is undercut from within, though they also see cause for hope

But the road won’t be easy, the scholars said, and significant change will take time. The session was sponsored by the Human Rights Program, the Davis Center for Russian and Eurasian Studies and the HLS Advocates for Human Rights,

Lawyer Sergey Golubok has been involved in a number of recent high-profile cases, including the defense of several members of a Greenpeace activist group jailed after they attempted to board a Russian oil rig to protest oil exploration in the Barents Sea, as well as the defense of members of the feminist protest rock group Pussy Riot, who were jailed after protesting against Russian President Vladimir Putin in an Orthodox Church in Moscow. Golubok said the biggest legal concern in Russia is the lack of judicial independence.

While high-profile cases attract considerable public attention, they often fail to shine light on “the systemic problems, the systemic deficiencies” in the Russian legal system, he said.

Judges are consistently pressured when making decisions, from both within the judiciary and the executive branch, and attempts at independence typically result in immediate dismissal, said Golubok. He said the criminal and civil legal system also lacks transparency, with rulings on particular cases often impossible to obtain, and an unfair system of allocating cases.

Even the relatively independent system of commercial courts, which was established in the 1990s in response to Russia’s emerging market economy, and which had established its own framework and case law, probably will soon be folded back into the general legal system in the wake of a January decision to abolish the court.

“It shows the lack of willingness on the part of the authorities to tolerate even this relative independence,” Golubok said.

“The only thing the European Court of Human Rights can do is to declare that in the course of the domestic proceedings, provisions of the European Convention on Human Rights have been violated,” Golubok said. “You cannot supervise the functioning of the legal system from Strasbourg,” France.

Anton Burkov, a public interest litigator, sounded a guarded though somewhat more optimistic note in describing his experiences arguing before Russia’s supreme court. “We need to use what we have,” said Burkov, who works with Sutyajnik, a nongovernmental human rights organization founded in 1994.

While investigating allegations of corrupt election practices, Burkov was encouraged by members of the community to run for office in an effort to expose campaign abuses. “We thought we might use this opportunity to monitor the system of elections from within.”

His campaign quickly faced accusations of violations levied against it by the election commission, which argued that he and several other candidates had incorrectly reported their campaign finance information. The problem, said Burkov, was that these financial rules and regulations “were simply not published.”

With no way to follow the rules accurately, Burkov took his case to the supreme court. Though he and his cohorts lost because the “regulation was published one week before the hearing at the supreme court,” it was still a victory, he said. “When we started this litigation campaign, elections commissions stopped putting pressure on the candidates.”

“The use of strategic litigation is important,” Burkov said, “because NGOs have very limited resources. They have to select particular cases, which will have the most impact, not just for the client who is the victim, but also for the indefinite circle of people [affected].”

Joshua Rubenstein, an associate of the Davis Center and former northeast regional director of Amnesty International, moderated the afternoon discussion. He said that, in contrast to Soviet times, the mere presence of the scholars at Harvard was a sign of progress.

The facts that both scholars were allowed to travel to the United States where they could openly talk about their ongoing work, that they would be able to return to Russia “without much difficulty,” and that they are actively involved with the European Court of Human Rights, said Rubenstein, signified a  shift toward openness.

“[It’s] some kind of advance,” Rubenstein said, “however vague, however undefined.”