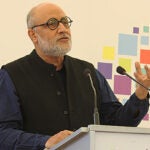 The bright side of Pakistan

Q&A with Nicholas Burns on where Ukraine-Russia chess match may lead, and what that means to the players

The debate over Crimea has grown more heated as Russian President Vladimir Putin first insisted that citizens in the majority ethnic-Russian region of Ukraine should determine their own political fate, then supported a plebiscite there on the territory’s future, and finally declared Crimea part of Russia. But many world leaders disagree, arguing that Ukraine’s national sovereignty has been violated and that Putin is simply exercising a power grab.

By email, Nicholas Burns, professor of the practice of diplomacy and international politics at Harvard Kennedy School, answered questions about the crisis, its implications, and possible outcomes.

GAZETTE: What is President Putin’s strategy toward Ukraine?

BURNS: Following Sunday’s referendum in Crimea, Putin’s strategy is crystal clear. He seeks to build a band of buffer states in an orbit around the Russian Federation and to deny them the right to look westward for their future trade, investment, and security ties.  That is why he invaded Georgia in August 2008. He fought to separate it from Abkhazia and South Ossetia, both still under effective Russian control.

He is coercing Armenia, Moldova, and now Ukraine from even thinking about a relationship with the European Union, much less NATO. He may very well move to annex Crimea — a clear violation of international law, the United Nations Charter, and the Helsinki Final Act, as well as the Budapest Agreement of December 1994.  Putin is also reserving the right to rush to “protect” ethnic Russians in eastern Ukraine should that be necessary.

Putin believes that power rules. He took Crimea because he could, knowing that NATO would not oppose him. I wonder if, with Russia on the move and China bullying smaller countries in the South China Sea, this is really the right time to reduce the U.S. Army to its smallest size since 1940.

He has moved a massive number of troops to the Ukraine border to intimidate the new government in Kiev.  His strategy is to preserve what the Russians call their “Near Abroad” — a sphere of influence for Russia.  This is indicative of a 20th-century and very Soviet mindset that is contrary to the democratic and pluralistic trends in modern Europe of our own century.

GAZETTE: How can the U.S. and Europe respond to Putin’s aggression in Ukraine?

BURNS: President Obama, Chancellor Angela Merkel, and other European leaders are seeking to do three things in response.

First, they are extending important economic assistance ($15 billion from the E.U. and $1 billion in U.S. loan guarantees) to the new interim government in Kiev.  That, along with International Monetary Fund assistance, will be a shot in the arm to the struggling authorities in Kiev who are trying to guide the country to new presidential elections on May 25. President Obama’s meeting in the Oval Office last week with Ukrainian Prime Minister Arseny Yatseniuk was important symbolic support to Kiev.

Second, while NATO will not consider the use of military force to oppose the Russian invasion of Crimea (we have no security commitment to Ukraine and to rattle sabers would be foolhardy in the nuclear age), NATO is building up its conventional forces in those NATO countries that are situated close to Ukraine and Russia — Poland, Romania, Lithuania, Latvia, and Estonia.  These new members of NATO experienced the Soviet reality all too vividly as members of the Warsaw Pact or, in the case of the Baltic states, republics of the U.S.S.R.  They have, understandably, an existential fear of Russian aggression. NATO has accordingly sent F-15 fighters to the Baltic countries and F-16s to Poland to reinforce the point to Putin that NATO’s Article V collective defense commitment is rock solid. Putin is a rational leader and will not contest NATO primacy in Eastern Europe. His strategy is to prey upon the weaker countries that have no ties to NATO or to the E.U.  Nonetheless, it is very important for President Obama to exercise strong and visible leadership of NATO during this crisis.

Third, Obama and European leaders want to employ sanctions on Russia to drive up the cost of the invasion to Putin.  But Europe and American may not be fully on the same page on sanctions. If the Crimea referendum results in a decision by Putin to have the territory separate formally from Ukraine through annexation, the U.S. and the East European allies will want to counter with strong sanctions. I hope that those European countries largely dependent on Russia for their natural gas imports will go along.  But the unfortunate reality is that Europe is hooked on Russian gas.  That has made them overly cautious in response to Putin. One policy decision Obama could make is to approve the sale and transport of liquefied natural gas exports to Europe.  While it would take several years to develop the infrastructure on both sides of the Atlantic, it might help to relieve the ill-advised European dependence on Russian energy over the long term.

It is important to remember that Obama did not cause this problem, Putin did. Obama’s critics are wrong to blame him for Putin’s aggression. That charge did not add up when Putin ignored George W. Bush during the Georgia War, and it doesn’t now.  It may be a quaint and antique notion, but wouldn’t it be nice if politics actually stopped at the water’s edge on Ukraine? We won the Cold War, in part, because there was unity at home.  This is a time, I think, when Republican leaders should stand with Obama as he duels with Putin.

GAZETTE: Is there a diplomatic strategy to help end the crisis?

BURNS: Wisely, President Obama and Secretary of State John Kerry have left the door open for a diplomatic resolution. They are trying to convince Putin to open talks with the new Ukrainian government on a possible agreement to provide greater autonomy for the ethnic Russian population in Crimea but to keep the territory within Ukraine. It is a good idea and provides an exit door for Putin should he wish to escape the crisis.  But, I don’t think he will walk down this road with us. And I don’t believe he will ever hand back Crimea now that he has stolen it.

GAZETTE: What is at stake in the Ukraine crisis?  Why is it important to Americans?

BURNS: A big idea — that every European democracy should be free, in the 21st century, to choose its friends and geopolitical orientation. If you think about it, we fought the First and Second World Wars, as well as the Cold War, because Europe was fractious, violent, and disunited. When the Cold War ended in 1991 with the merciful collapse of the Soviet empire, President George H.W. Bush said memorably that we had won a “democratic peace” in Europe.  It was one of the great achievements of American history and it has given us for 23 years (with the major exception of the Balkans) a welcome period of peace and of relative harmony and democracy in Europe.

Putin has disrupted that peace with his violation of Ukraine’s sovereign territory.  While the Cold War has not returned in its original form, Cold War passions have been unleashed once again. We are thus witnessing the renewal of the great struggle for peace and freedom in Europe that I don’t think will end until Putin’s generation of Soviet men pass from the scene.

When President Obama attends the Nuclear Security Summit in The Hague later this month, he should visit the monumental Peace Palace that Andrew Carnegie built there in 1913. Carnegie thought it might be possible to promote the amicable resolution of global disputes and to end war among the great powers.  The Peace Palace is now home in our time to the Permanent Court of Arbitration and the International Court of Justice.

Putin could have taken his Crimea obsession to its gilded corridors. But he chose war instead.  I find it to be supremely ironic that one of the Peace Palace’s major backers, Tsar Nicholas II, blundered into the Great War a year later that ultimately destroyed his empire and dynastic rule.

Obama could suggest that Putin, intent on restoring Russia’s greatness, be mindful of that historical lesson.  Carnegie’s call for a great power peace still resonates a century later. That is the peace Putin is threatening with his ill-advised land grab in Europe.

(Parts of this email interview were supplemented with material from Nicholas Burns’ March 13 op-ed column in The Boston Globe on this subject.)