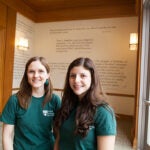 A range of voices on environmental justice

As the men’s basketball tournament known as March Madness edges closer to crowning another national champion, the debate over whether the National Collegiate Athletic Association (NCAA) exploits some of its student-athletes has reached a high-water mark.

In a ruling on Wednesday, a regional director of the National Labor Relations Board (NLRB) in Chicago said that football players at Northwestern University were employees of the private school and therefore had the right to unionize, setting up the possibility of the first labor union in college sports. A Northwestern spokesman said the university will appeal the ruling to the full NLRB in Washington. The NCAA, which was not a party to the proceeding but would be affected by unionizing, said on its website: “We strongly disagree with the notion that student-athletes are employees.”

This week, U.S. Education Secretary Arne Duncan ’87, a former Harvard basketball star, said on NBC’s “Meet the Press” that universities should consider tying bonus pay for college coaches and athletic directors to the academic performance and graduation rates of athletes, not team wins and losses. Duncan also criticized some university presidents and boards for not doing enough to ensure that the tail of athletics doesn’t wag the academic dog. While it is a member of the NCAA, Harvard offers only need-based financial aid.

Other pending legal challenges seek to test NCAA policies that strictly limit the amount of money that student-athletes can receive while playing; contest the number, value, and length of scholarships that schools can offer each year; and question whether athletes should get long-term financial help for injuries sustained while playing sports. There is also a class-action claim over concussions.

In one notable case, former UCLA basketball star Ed O’Bannon wants to bar the NCAA from limiting how much money student-athletes can receive while playing and to collect damages for the NCAA’s use of players’ images, likenesses, and names without permission. A trial is scheduled to begin June 9 in California. Last year, the NCAA took in $913 million, generated primarily from merchandise sales and broadcast rights.

Peter Carfagna is a lecturer on law at Harvard Law School (HLS) and runs its sports law clinic. A practicing sports law attorney, he spoke with the Gazette about the debate over compensation for student-athletes and the pending legal challenges to the NCAA’s authority.

GAZETTE: What are your thoughts on the ruling in favor of the Northwestern University football players?

CARFAGNA: A huge surprise, an upset victory by the union side of the competition here. I don’t think many close observers of the scene anticipated the result. It was a close call at best. They scored the first touchdown. But the game continues, to use a football metaphor, because Northwestern is going to be appealing it. A surprising result. The whole legal world, not just the sports legal world, is watching this unionization effort. For the Teamsters and other unions, this has become important to them, for obvious reasons, but when you micro it down to the world of college sports … it’s really a tectonic shift in how college sports would have to operate if this ruling is upheld.

GAZETTE: How would the business of college sports be affected if the NCAA were required to compensate many student-athletes?

CARFAGNA: It wouldn’t necessarily jump right to that — that’s what everybody’s jumping to. But it would mean, “we’ll sit down at the table,” like we would have to with any collective-bargaining unit, and we would negotiate terms and conditions of employment. So, start with health and safety issues they feel are not adequately addressed under the current system, I know that’s a big part of it, health and safety. Certainly you have to pay the player at least sharing in and being compensated in a thoroughgoing and fair way. [The player] would be right up there at the negotiating table, and then that becomes the ebb and flow of the negotiation and who knows how that would come out?

Certainly, you’ve got the O’Bannon case out there, a $40 million settlement already, over licensing and royalties from video games. So that’s $40 million that EA Sports and Collegiate Licensing have paid to be done with that suit. You don’t pay $40 million if there isn’t some merit, and the NCAA continues to defend that suit, so you’ve got one flank over here where you’ve got a huge liability staring at you right in the face on paying them for the use of their name, likeness, and image — that’s one problem they’d have to deal with at this hypothetical negotiating table.

Second is the concussion litigations that are pending against the NCAA. . . . And thirdly, there’s two putative class actions pending against the NCAA going from tuition, room, and board to “full cost of attendance,” which would mean anywhere from $2,000 to $5,000 or more per year per student-athlete, which has been on the table for the last few years, which harkens back to a $228 million settlement the NCAA entered into on that very same issue a few years ago. To me, all of those things would be on the table, and then the negotiations would likely replicate what happens between the NFL and its players’ association and the NBA and its players’ association, in which agreements would protect the NCAA from all this litigation under federal labor exemption.

GAZETTE: The NCAA is currently facing a number of lawsuits on issues around scholarship rules, compensation, head injuries, medical costs, etc. O’Bannon’s attorney has said that his case has wider implications and could set the stage for broad reforms to the way many college athletes are treated. Is he right? And if so, how might that play out?

CARFAGNA: We’ve had Ed up at Harvard; he was on a panel for us. I agree with all that. Consideration is the scholarship grant for tuition, room, and board by the NCAA, and the scholarship grant letter itself says, essentially, just paraphrasing: While you’re a student-athlete, you hereby grant us the right to use your name/image/likeness for the promotion of our sport, our school, our events. Now, it’s very fuzzily worded. What does an 18-year-old Ed O’Bannon know when UCLA offers him that letter and he signs it? Well, he’s essentially waived his rights as claimant in perpetuity. What the lawyer’s getting at, what Ed said when he came to our panel was, “It’s a contract of adhesion; I didn’t know what I was signing. Sure, I understood while I was playing there they could use me, but now I’m in a video game and they’re selling my numbered jersey without my name on it, and that’s not right.”

The point is the limitation of that waiver. Because the NCAA says, “In perpetuity we own your name, image, and likeness for all purposes,” and the answer coming back is “Well, no, maybe while I’m a student-athlete, but afterward if you’re making money off of me, you’ve got to pay me, or create a trust fund that I can petition for payment.” It goes so far as to say current athletes should share in media rights. So … he’s saying, and the judge has allowed those claims to continue for current media rights. That would really be big, worth hundreds of millions of dollars for March Madness. . . . It would seem to me that when you’re playing, those rights belong to a school and the NCAA, but the judge let it ride.

GAZETTE: Given that the cost of NCAA scholarships represents only a tiny fraction of the financial value that student-athletes bring to their respective schools, are such student-athletes “exploited employees,” as some argue?

CARFAGNA: Taylor Branch, who’s a Pulitzer Prize-winning author and really made his life’s work studying the history of slavery — he came to our class last fall and talked about his new book. He wrote an article called “The Shame of College Sports” that he’s turned into a book, “Cartel.” There’s a documentary called “Schooled” that was shown during my class last fall. I have to remain neutral, because then I have representatives from the other side come and talk about why the scholarship grant is fair consideration. To answer your question, Taylor says this is slavery, this is involuntary servitude, and makes that case very effectively. And there were many in the audience who agreed with him.

And then are others who say, like Warren Zola — he runs the professional sports counseling panel at Boston College — and he’ll take the other side of the issue for a good school like BC, which graduates 90+ percent of its student-athletes. … If you want my opinion, I think full cost of attendance is appropriate, at least. But that would raise all sorts of Title IX issues. Many schools simply could not afford it.

GAZETTE: What is a reasonable way to compensate student-athletes while also satisfying the NCAA’s interest in maintaining some league parity so that the richest and/or most motivated schools can’t simply “buy up” the best athletes year after year?

CARFAGNA: When I had [Zola] at class, he said, “Look, there might be a secession movement.” The big schools, they don’t need the NCAA. They might just say: “See you later; we don’t need all these amateurism rules. Why do we need you guys to run our Final Four? Why do we need you administrators to run the BCS [football’s Bowl Championship Series]? We’ll just take the greatest 64 teams and just have our own conference, and see you later.” That’s the possible fallout. And he’s at BC, which is very competitive in the two major sports and great at hockey. They’re kind of at a crossroads.

What does a Duke do? What does an ACC [Atlantic Coast Conference] school with high academic standards do? There’s such a wide range of opinion as to what’s appropriate. The end of the spectrum is, for these scholarships at a place like BC, at Notre Dame, at Stanford, is full consideration. That’s what the NCAA is saying loud and clear: Student-athletes get a free education that would cost them hundreds of thousands of dollars to go to Duke, but here it’s for free. If it’s not broken, don’t try to fix it. It’s worked for a long time. Their main defense, and it has some merit to it, is “You didn’t have to take the scholarship.” … They’re saying, “Hey, if you don’t like it, we’ve got 10 more guys in line who are happy to sign that letter and get a free Stanford education.”

GAZETTE: Do you agree with Duncan’s position, and, if not, what can be done by school administrations to ensure that academics are taken as seriously by coaches as athletics?

CARFAGNA: It’s not a one size fits all. Let’s take Ohio State: You go across the state, if you put a pinprick on the highest paid state employee — I think it’s up to over 30 states — it’s the football coach. That’s not appropriate, I agree. You take an Alabama:  $7 million with bonuses, and that’s just what the university pays, not to mention all [other outside compensation], and Nick Saban’s making $10 million, probably. That bubble is continuing to explode, whereby coaches are becoming multimillionaires, and they’re job shopping, and have carve-outs in their agreements to allow them to hopscotch all around to the next-highest bidder. … So what should Ohio State, what should the president of [the University of] Alabama do, [given] the pressures on these guys to deliver many millions of dollars back to the university? I don’t know. I wouldn’t want to be a university president in that situation. It’s a tough draw. But yeah, I think all the things Secretary Duncan is saying make sense, and I would agree with him. But who’s going to enforce them?