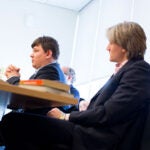 As the intense conflict between Russia and Ukraine continues, and talk of a return to Cold War-style politics heats up, top world leaders, including President Vladimir Putin and President Obama, are slated to meet later this month to discuss how best to contain what all agree is a significant and growing international threat: nuclear terrorism.

While nuclear arms control and disarmament talks between nations have long been a cornerstone of diplomacy, making sure nuclear materials don’t fall into the hands of individuals or groups bent on harm has not received that same level of attention from the international community until recently.

“Unfortunately, the global … framework for nuclear security is quite weak,” said Matthew Bunn, professor of practice at Harvard Kennedy School (HKS) and co-principal investigator for the Project on Managing the Atom, a nuclear research and policy program at the Belfer Center for Science and International Affairs.

“It’s not like nuclear verification, where countries have signed treaties that allow the International Atomic Energy Agency legal rights to come and inspect. There’s nothing like that on nuclear security. It is considered a sovereign matter for each country to make up its own mind about what kind of security it should have.”

According to the first survey of nuclear security experts around the world, co-authored by Bunn and published this month by HKS, nearly all of the respondents said their nations’ policies and practices had become “much more stringent” in the last 15 years. The biggest catalyst for tightening up, they reported, was a major terrorism incident like 9/11, followed by reviews conducted either internally or by the International Atomic Energy Agency that revealed security inadequacies.

The survey is among several on the state of nuclear security made available on a comprehensive new website from HKS, as authorities prepare for the third Nuclear Security Summit to be held March 24-25 in The Hague, Netherlands.

Started at Obama’s urging to bring greater attention to the danger of nuclear terrorism, the summit convenes every two years, bringing together presidents and prime ministers from 58 invited countries to discuss ways to reduce the amount of nonmilitary caches of separated plutonium or highly enriched uranium that are vulnerable to terrorists; to improve security at sites where such nuclear materials are stored; and to develop better cooperation and accountability among nations to reduce the likelihood of nuclear terrorism.

“Nuclear terrorism is a combination of motivation, capability, and opportunity,” said Laura Holgate, senior director for weapons of mass destruction, terrorism, and threat reduction at the National Security Council, during a March 3 panel at HKS about this year’s summit. Holgate and Gary Samore, the Belfer Center’s executive director for research, organized the first summit, held in 2010. “The only term in this equation that states have control over is the opportunity. It is the material. If you don’t have the material, you don’t have nuclear terrorism.”

Nuclear terrorists would be expected to pursue three goals: making a crude nuclear bomb that could decimate an entire city; sabotaging a nuclear facility to cause a meltdown or other tragedies; or building a dirty bomb that spreads radiological material that may not necessarily kill a large number of people, but would cause panic and massive disruption, and prove costly to clean up. All require surprisingly minimal nuclear expertise to accomplish.

Thus far, 27 countries have eliminated all of the nuclear material on their soil, while almost all the remaining countries participating have taken meaningful steps to improve the security of their nuclear stocks, a development Bunn called “dramatic progress.”

“The reality is that nuclear security isn’t an on/off switch,” said Bunn. “It’s not something where it was vulnerable and now it’s secure. Rather, it’s a spectrum, and it’s a continuing process of always trying to look for vulnerabilities, find them, fix them, looking for ways you might be able to do things better, looking for ways to adapt to changing circumstances or changing threats.”

Participating countries are expected to arrive in The Hague prepared to deliver on their own security promises, referred to as “house gifts,” or to join a small group of nations that have reached consensus on certain security measures, known as “gift baskets.”

“Certainly, the countries with the largest stocks of material have taken fairly significant action to improve security, including the United States, including Russia, including the United Kingdom, France, China, etc.,” Bunn said. “It is true, however, there’s a lot more to be done. We did not succeed in four years in making sure there wasn’t any vulnerable nuclear material in the world anymore. We succeeded in making a lot of progress toward that objective, but we didn’t cross the finish line.”

How countries balance the need to assure each other that they have taken the appropriate steps to effectively secure their nuclear materials with the desire to maintain secrecy over which threats they’re targeting will be a key topic of discussion during the summit, said Bunn.

“Everyone has an interest in making sure all the other countries are fulfilling their responsibilities, and we don’t really have an international mechanism for countries to be able to exercise that interest,” he said. “One concern I have is we may end up with agreement on the principle of assurances, and may end up with assurances that don’t provide any assurance,” he said.

In the United States, the sometimes-tenuous state of nuclear security was dramatically tested during a 2012 protest against the Y-12 National Security Complex in Oak Ridge, Tenn. Three anti-nuclear protesters, including an 82-year-old nun, breached layers of security at the complex, then spray-painted slogans and smeared blood on the walls of a storage facility that held weapons-grade uranium. Eventually captured by a guard, the protesters were sentenced to prison last month.

Bunn says the event was a “profound breakdown” of security culture, proof that human failure can undermine even the most sophisticated equipment.

“That suggested that even in countries like the United States, which probably has tougher rules and spends more on nuclear security maybe than any other country, there’s still more to be done.”

A new report by Bunn and HKS faculty Martin B. Malin, Nickolas Roth, and William H. Tobey on the progress countries have made to secure nuclear materials, weapons, and facilities found that while many countries have made noteworthy strides since the 2010 summit — including 13 nations that have eliminated highly enriched uranium or separated plutonium on their soil entirely — “significant gaps” remain. Many nations still have no on-site guards to protect nuclear sites, conduct no background checks before allowing access to facilities or materials, and have limited protection from insider theft. Few adequately test their security measures or have programs to assess and strengthen security culture, the report said.