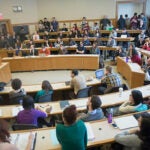 Study could cause major shift in how policies are addressed

A large study of child growth patterns in 36 developing countries finds that, contrary to widely held beliefs, economic growth has little to no effect on the nutritional status of the world’s poorest children. The study, from researchers at Harvard School of Public Health (HSPH), the University of Göttingen in Germany, ETH Zürich, and the Indian Institute of Technology Gandhinagar in Gujarat, India, found that economic growth was associated with small or no declines in stunting, underweight, and wasting — all signs of undernutrition.

“These findings represent a potentially major shift in how we think about policies to reduce child undernutrition,” said S.V. Subramanian, senior author and professor of population health and geography at HSPH. “They emphasize that focusing on improving economic growth does not necessarily translate to child health gains.”

“Our study does not imply that economic development is not important in a general sense, but cautions policymakers about relying solely on the trickle-down effects of economic growth on child nutrition,” said Sebastian Vollmer, assistant professor of development economics at the University of Göttingen, adjunct assistant professor of global health at HSPH, and lead author of the study.

The study appears online March 27 in The Lancet Global Health.

The researchers analyzed data from nationally representative samples of children under 3 years of age taken from 121 demographic and health surveys done in 36 low- and middle-income countries between 1990 and 2011. They measured the effect of changes in per-head gross domestic product (GDP) on changes in stunting, underweight, and wasting.

The findings showed no link between economic growth and undernutrition rates at a country level. For individual children, a 5 percent increase in per-head GDP was associated with a very small reduction in the odds of being stunted (0.4 percent), underweight (1.1 percent), or wasted (1.7 percent). Notably, no link was observed between economic growth and undernutrition in children from the poorest households, who were at greatest risk.

Several explanations could account for the weak association between economic growth and reductions in child undernutrition, the researchers write. Growth in incomes could be unequally distributed, with poor people excluded from the benefits. And in households where there was increased prosperity, money might not necessarily be spent in ways that enhanced the nutritional status of children. Improvements in public services that benefit health, such as vaccinations or clean water, may also lag behind growth in incomes.

While direct investments in interventions that matter for child nutrition appear to be critical, the need for a more systematic and rigorous analysis of what specific health-related interventions would yield the greatest return remains, say the authors.

This study received support from the Open Access Publication Funds of the University of Göttingen, Germany.