A sampling of college 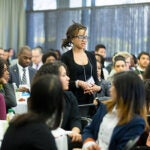 Educators from Cambridge’s public schools voiced their approval as Suzanne Bouffard, a researcher and writer with the Harvard Graduate School of Education (HGSE), spoke about the galvanizing power of helping students believe that college is a goal they can not only pursue, but can master and achieve.

“Students need to believe that they can go to college,” she said. “It’s having the opportunity to master that experience, not simply being told that they’re able to do it.”

Bouffard, the co-author of “Ready, Willing, and Able: A Developmental Approach to College Access and Success” with Mandy Savitz-Romer, the director of the Prevention Science and Practice Program and senior lecturer on education at HGSE, addressed the crowd March 14 as part of a professional development class through Harvard’s Project Teach.

Created 25 years ago as a way to connect Harvard with the Cambridge public schools (CPS), Project Teach now involves sharing a research-based approach with educators in the local schools. The new model includes lesson plans for teachers to use before and after the visit to Harvard’s campus, aimed at helping to establish college as a future prospect as early as in middle school.

This year, Project Teach will bring every seventh grader from the Cambridge schools to Harvard, with students selecting from courses such as English, science, the social sciences, and the arts, and with Harvard faculty members leading the discussions. Building upon last year’s program, the 2014 initiative will provide take-home activities for students’ families and classroom discussions preceding and after the event, helping shape a framework for young students to visualize a future on a college campus.

“The redesign of Project Teach is one way that Harvard demonstrates an ongoing commitment to refining programs so that we can enhance the productive partnership with the Cambridge public schools, the students, and families,” said Kevin Casey, associate vice president for public affairs and communications. “We are proud to partner with Superintendent [Jeffrey] Young and C.P.S. to reach a goal of increasing the long-term academic success of all of these students.”

One of the attendees, Cambridge Street Upper School head of school Manuel Fernandez, recalled the impact that visiting Harvard had on his students last year.

“I was moved by the responses of my students. For many, it was their first time on a college campus,” he said. “The formal and informal presentations made many of them feel that they could actually go to college. That, in and of itself, makes the trip so very important for our student population.”

In addition, Fernandez said, Project Teach’s training for educators helped to provide new ways to “support students in creating a college-going identity. It energized my team to think about strategies that we can implement on a daily basis, and ways that we can help students to maximize their assets.”

Establishing that long-range vision, Bouffard said, is vital, and equally important as encouraging students to open their minds to academic opportunities. In essence, “what matters most is what [a student] believes” in determining his or her future success.”

“I’m not saying that money isn’t important. I’m saying that it’s not the only motivator,” she said. “Different students respond to different motivations, and it’s finding those motivators that helps determine each student’s success.”

Project Teach is one of many programs at Harvard that engage local students.  To learn more about the University’s partnerships with local schools, visit Harvard Community Connections on the Web.