A range of voices on environmental justice 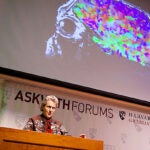 Autism as a facet of experience, not a limit

The rebuff highlighted a glaring disconnect within the environmental justice movement at the time, Lazarus said. “The whole problem was that mainstream environmental groups and agencies had not been paying attention to the needs and distinct interests, from the environmental protection perspective, of low-income communities and communities of color in the United States.”

“Unlike the EPA back in the 1990s, the students got it,” said Lazarus who praised the conference planners for bringing together community organizers with “people who have been major players and inspirational leaders in this area from all walks.”

“This is not just something where there are going to be a bunch of national leaders who run the show. It is all about community empowerment.”

In preparing to bid for the national conference, a team of students led by HELS co-presidents Genevieve Parshalle ’15 and Cecilia Segal ’15 considered a framework built around a hot-button issue such as climate change or hydraulic fracking. They opted instead for a subject they think has received less attention, but could “gain traction” with other students.

“Environmental justice is more interdisciplinary and touches on things like social justice, civil rights,” said Segal. “A lot of people are passionate about those topics and we realized we would get a much broader appeal with a topic like this; this is actually more about humans affected on a daily basis.”

Among the roughly 200 attendees will be social scientists, lawyers, community organizers, representatives from state and federal agencies, grass-roots activists, and students.

“I am thrilled to be attending Harvard Law School’s Environmental Justice Conference,” said Curt Spalding, regional administrator for EPA New England. “Environmental justice is such an important topic, one that is in fact critical to EPA’s mission.”

On Saturday, the discussion will turn to specific issues of food justice, urban environmental justice, and access to clean energy. The event will conclude with a series of informal discussion sessions with Spalding and representatives from other federal agencies. Organizers plan to blog about the conference for the EPA’s website.

“I think it is just an amazing opportunity to see what happens when you get all these people together with the express purpose of thinking about what’s worked, what hasn’t worked, and how can we move forward on this topic,” said Parshalle. “It will be really exciting to see what suggestions come out of it, and to see if we can really help move the conversation forward.”

“It would have been unimaginable anytime before now since 1970 to have Harvard host this meeting,” said Lazarus. “But the fact we are really is a statement about where the program has come.”

Both the Law School’s commitment to the issue and the students involved in the environmental program were critical in securing the conference, he added.

“The students are extraordinary. They put in the bid. They came up with the environmental justice theme. They did it. … It’s a wonderfully, sensitively constructed program.”

Asked about the status of environmental justice 20 years after Clinton’s order, Lazarus said, “In the mid-’90s there was a tremendous sense that we were going to see a sea change in the ways that environmental laws were administered and enforced. I think that those very optimistic sentiments have been realized, but only in part.”

To learn more about the conference, visit the NAELS 2014 website.