A fresh bite of the Apple 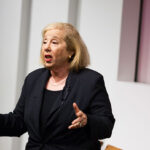 Three ways to innovate in a stagnant environment

In business school parlance, it’s known as the “founders’ dilemma.” Inventors and entrepreneurs with a great idea start a business partnership in hopes of building and running a wildly profitable company. After all, who better to bring a product or service to market, and to lead others in that effort, than its creators?

More often than not, the answer is: someone else.

Historically, few business founders have thrived in the role of CEO. Nearly 80 percent of founders are forced out before a company fully hits its stride and goes public, according to a 2008 analysis by Noam Wasserman, associate professor of business administration at Harvard Business School (HBS).

One of the most famous and dramatic examples of this timeless power struggle took place at Apple. During its early years, flush with the success of the Apple II computer, co-founders Steve Wozniak and Steve Jobs clashed over the company’s direction. Wozniak dialed back his involvement with Apple in the wake of head injuries he suffered in a 1981 plane crash, and shortly after that Jobs — by then chairman and the company’s public face — battled with the board of directors, who fired him in 1985.

That juicy storyline, which became widely known from the best-selling 2011 biography of Jobs by Walter Isaacson ’74, was the basis for “Apple’s Core,” Wasserman’s popular and influential HBS case, and one that has been taught at business schools around the world since it was first published in 2008.

“The goal was to focus on a company that was near and dear to the students’ hearts, but one for which they did not know the early ‘founding fireworks’ that had almost blown up the company in its infancy,” Wasserman said in an email about the case, which forms the basis of his M.B.A. course that instructs students on how to anticipate and avoid a similar fate.

Now, “Apple’s Core” has been freshly recast for today’s image-centric student as a Japanese manga-style graphic novel, one of only four such cases published by Harvard Business Review Press.

Professor Thomas Alexander, M.B.A. ’75, has taught “Apple’s Core” for several years at the Asian Institute of Management in Philippines, and Babson College in Wellesley, Mass. Alexander, a Silicon Valley entrepreneur who has started a handful of companies (including one that makes mini Apache helicopters, Hummer vehicles, and other accessories for G.I. Joe action figures), said his students at the institute, many of them from India, China, Korea, Philippines, and Europe, were not as excited to read text cases like “Apple’s Core” as he thought they should be.

“None of them had English as a strong suit. So I knew that to give them a 30- to 50-page written text, they will not read this. The participation will not be there,” said Alexander.

So with an entrepreneur’s eye for innovation — and Wasserman’s blessing — Alexander distilled the essence of “Apple’s Core” into a 30-page script and then hired a Filipino artist to illustrate it. Three weeks later, with some fine-tuning by Alexander and Wasserman, the Apple story in comic book form was born.

The graphic novel case traces teenage friends Wozniak and Jobs, whose budding interest in gadgets and computers, but vastly different skill sets, leads to Apple’s launch in Jobs’ parents’ garage in Los Altos, Calif. The story’s climactic finale occurs as a tearful Wozniak learns that Jobs had betrayed him years earlier, reportedly lying about how much the pair really earned ($5,000) from their first sale, an Atari video game chip that Wozniak alone developed, but for which Jobs took all of the credit and most of the money.

“When Tom sent over the original cut, I thought it was quite creative and intriguing, and worth taking on as an experiment,” said Wasserman. “This past semester, I gave it out at the end of class as an optional reading.  Students grabbed all 20 copies I made.”

Long derided as lowbrow entertainment for children, comic books, particularly graphic novels, began to find broad commercial success and literary acclaim in the 1990s with Art Spiegelman’s Pulitzer Prize-winning Holocaust story, “Maus: A Survivor’s Tale.” Since then, the format’s value as an alternative teaching method to straight text has been slowly embraced, especially in the humanities. Research has shown that image-based storytelling combined with text presents a more dynamic learning experience, one that stimulates mental participation and ultimately leads to better comprehension among disinterested students or those with learning or reading disabilities.

Alexander said the graphic novel case was an instant hit, with student participation and attendance rates for his classes at the institute leaping from 70 percent to 97.

“They really got into the gist, and they talked about it,” he said. “I was fascinated by that. I had two sections of 80. In one section, I used to give them the printed text, and the other I gave … the graphic one. And I found out the [section] that I didn’t give the graphic [novel case to] came and borrowed the graphic one.”

The comic’s visual style, with its strong focus on dramatic moments and character emotions, resonated with many students and brought home the idea that unexpected conflicts between a company’s key players can derail even the best-laid business plans. “It touches some people who really understand the feeling much better than reading two paragraphs of writing,” he said.