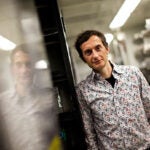 A new study offers the first evidence that fetal sex can affect the amount of milk cows produce, a finding that could have major economic implications for dairy farmers.

The study, co-authored by a Harvard scientist, examined 2.4 million lactations by nearly 1.5 million dairy cows in the United States, finding that cows that gestated back-to-back daughters produced as much as 1,000 pounds more milk than those that give birth to sons over the first two lactations. The work is described in a Feb. 3 paper in PLoS One.

The study authors included an estimate on the potential value of using artificial insemination techniques to increase the number of female calves cows produce.

“If this were adopted by the dairy industry today, not counting the cost of the technology for sperm selection, the growth in terms of wholesale milk value is in the ballpark of $200 million gross — just by manipulating the conception of a daughter on the first pregnancy,” said Katie Hinde, an assistant professor of human evolutionary biology, who co-authored the study with Barry Bradford, an associate professor at Kansas State University. “This is something, I think, that would be very appealing, especially to organic dairy farmers, because this is a method for increasing milk production that would be allowable under organic standards.”

The importance of the study, however, goes well beyond the economics of dairy farms, she said.

“One of the key questions in evolutionary biology is how mothers allocate resources to their offspring. There have been a handful of studies that show the milk produced for sons and daughters is different, but it was unclear whether this was due to some behavioral interaction between the mother and the infant postnatally or if there was something going on prenatally. We’ve now shown that this is established during pregnancy, although nursing patterns after birth are likely to also be important.”

To explore whether another factor, such as a difficult delivery, might be behind the difference in milk production, Hinde and her co-authors selected 113,000 cases in which researchers had complete data on the first and second pregnancies of cows that experienced low-stress labors. The results were unequivocal — cows produce more milk for daughters than they do for sons.

The question that remained, Hinde said, was how powerful the effect was. Could the sex of a fetus influence milk production in an already-established lactation? Could the sex of one fetus affect lactation in a subsequent pregnancy, even years later?

“In both cases, the answer is yes,” she said. “The cellular architecture of the mammary gland is such that its ability to synthesize milk improves in an additive way across pregnancies. What we found was that having a daughter in the first pregnancy seems to be creating a higher ‘set point’ … and the next lactation is additive from that higher base point.”

While cows that conceived back-to-back sons produced significantly less milk, researchers were surprised to find that a son-daughter sequence led to an increase in milk production, though one less pronounced than the increase through back-to-back daughters. Interestingly, Hinde said, among cows that conceived a daughter followed by a son, milk production remained high.

What could be behind the disparities? Hinde and colleagues believe there are two possible answers.

The difference in production could be an evolutionary adaptation that cows use to help female calves develop earlier, thus increasing their reproductive potential.

“The fact is what constrains a daughter’s reproductive potential is the length of her reproductive career,” Hinde explained. “But if she can develop and mature at a faster rate, and start reproducing earlier, that’s one way she can potentially increase her offspring output over her lifetime, whereas sons can slow-play it … as long as they are healthy enough to reach maturity, they can make up for whatever deficit they received from their mother early in life. So it could be that mothers are adaptively allocating more resources to daughters in an effort to accelerate their reproductive maturation.”

The other theory, Hinde said, is that the difference is the result of the shared physiology between mother and daughter.

“Just by virtue of its shared physiology with the mother, through the placenta and shared circulation exchange, the fetus has the ability to affect the mother,” he said. “We see this in humans with conditions like gestational diabetes. The estrogens produced by the fetal daughter are the same hormones that, in the mother, are priming the mammary gland’s development during pregnancy, so it could be that daughters are an added hormonal signal that results in an increase in milk synthesis.”

While the study points to an opportunity for dairy farmers to increase output without increasing their herds, Hinde emphasized that some of its central findings also connect to important health issues.

“Knowledge about lactation and breastfeeding is essential for empowering mothers and families to make decisions about infant feeding,” she said. “That same information is going to inform clinical practices — if the physiology of sons is such that they are expecting certain constituents or certain volumes of milk that’s different from daughters, that’s going to affect how doctors feed them in neonatal intensive care units, or during illnesses.

“We owe it to women who do not breastfeed — whether it’s due to clinical contraindications, socioeconomic cultural realities, or institutional barriers — to have infant formula products that are the best they can be. We made different deodorants for men and women, and yet we still make one-size-fits-all baby formula. We are not yet at the point where we can say the milk should be different for sons and daughters, but we are at the point where we can see differences, and we need to understand those much better.”

Aside from the science, the research was noteworthy for its origin: Rather than being the product of a chance meeting at a conference, Hinde’s collaboration with Bradford began in a thoroughly 21st-century way — via Twitter.

“I had written a blog post about sex-biased milk synthesis that outlined all the mammal species for which we have data, and highlighted the pre- versus postnatal question,” she said. “I posted a link to the post on Twitter, and a few weeks later I got a direct message from Barry asking if I was interested in collaborating with a dairy cow model since I usually study monkeys and humans.

“I was immediately excited, because I saw this as the perfect synthesis of exciting, novel results, the value of large data sets and the opportunities afforded us by online social networks among scientists.”