Shadowing the work of nations 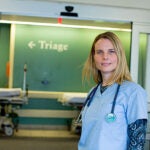 Harvard Model U.N. hosts thousands from many nations, seeking solutions that can triumph over conflicts

Ethan Lyle experienced one benefit of Harvard’s Model United Nations after he graduated from the College last spring and took a job with the international legal and consulting firm Ropes & Gray.

The firm was planning a major conference, with thousands of participants, at the Sheraton Boston Hotel, which was where Lyle, who served as Harvard Model U.N. secretary-general his senior year, had helped to stage conferences in each of his undergraduate years.

The Ropes & Gray organizers in New York were looking for photos of the conference rooms. Lyle was able to describe the facilities. They wanted to know about the menu, and again Lyle could help, since Model U.N. organizers have to help feed the thousands who attend.

“It’s interesting how doing this activity can help you in ways you wouldn’t expect,” Lyle said.

The multiple and sometimes unexpected benefits of the Model U.N. was a theme echoed by those to Lyle’s right and left last Friday, as he sat on a panel of past Harvard Model U.N. participants during this year’s conference at the Sheraton Boston. Lyle’s story was familiar, as each panelist said the experience had proven helpful in different ways since he or she left Harvard.

One speaker, who is completing a degree at the Harvard Kennedy School, has been helped in perhaps expected ways, gaining public-speaking and negotiation skills and knowledge of international affairs to prepare for an anticipated career in the Foreign Service. Another said experience in foreign affairs and in organizing people helped toward a career in nonprofit organizations, while a third said it was the ability to find and understand large amounts of information that has left him in good stead.

Meanwhile, scattered in other conference rooms at the Sheraton, 3,000 high school delegates and 235 Harvard undergraduates were learning their own lessons. This year’s Harvard Model U.N. drew students from high schools in 19 states and 40 countries. Along with them were more then 200 faculty advisers. The Harvard undergraduates, members of Harvard Model U.N., organized the conference and guided the four days of activities, which began last Thursday.

Lucy LaVallee attended with a delegation from CATS Academy Boston in Newton, where she teaches English as a second language. Her group was “representing” South Africa at the conference, promoting the nation’s positions and, through compromise, possible solutions to issues of concern.

LaVallee said the experience is beneficial to her students because, as non-native English speakers, they have to read extensive background material and prepare position papers and arguments on a range of subjects. It also gives them experience speaking with other delegates and negotiating compromise positions.

Lilit Badeyan, a junior at CATS Academy, is participating in the Model U.N. because she’s interested in the world, particularly economics. Badeyan served as a delegate to the General Assembly’s Economics and Finance Committee, and is investigating the global effect of the rising middle class.

“Model U.N. is a great opportunity for any student who likes debating and is interested in what’s going on in the world,” Badeyan said.

Sam Leiter, a Harvard senior and secretary-general of this year’s conference, said that Model U.N. not only gives student delegates an understanding of international issues, but also forces them to take positions they may not personally share, to find common ground with those holding differing positions, and seek compromises.

“Not only are you finding common ground with people, you’re learning to appreciate the differences of people,” Leiter said.

Harvard’s Model U.N. is the oldest of many such organizations around the world. The Harvard group began in 1927 as a Model League of Nations. It took its current form in 1953, and this is its 61st session. Each year, the organization hosts and organizes the large international conference in Boston. Undergraduates serve as directors of committees representing specific subjects. The delegates attend meetings and negotiate between different positions to come up with resolutions.

Each of 29 committees handles one or two topics. Over the four days, delegates debate and pass resolutions on some 50 topics, according to Miranda Ravicz, a Harvard senior and director-general of the Harvard Model U.N. In addition to familiar topics such as drone warfare, others harken to earlier times. One group this year simulated not a U.N. committee but the court of Alexander the Great.

Another way that organizers inject realism and excitement into the proceedings is to change the ground rules by simulating a crisis. Organizers make an announcement of a major development, such as a natural disaster or outbreak of war, and let the delegates figure out how that affects their priorities and positions.

“The idea of the crisis is to give people something gritty to grapple with, not just to add excitement, but something that is a game-changer somehow,” Ravicz said.

In addition to the more programmatic benefits gained by the Harvard students participating, another benefit is personal: spending four years sharing an interest, making friends, and learning from each other.

“You come in as a freshman, watching the seniors, and suddenly you’re a senior doing what you thought you’d never be able to do,” said James Cairns, Harvard Model’s U.N. secretary-general in 1987, who is back at Harvard directing the Center on the Developing Child’s Global Children’s Initiative after years of working for international nonprofits. “It’s about the friendship, what it’s like to work as a team.”