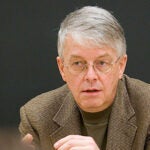 Nearly 1 million Syrian refugees living in temporary conditions in Lebanon are approaching catastrophe and in desperate need of additional aid, according to a report from Harvard’s FXB Center for Health and Human Rights.

“Running Out of Time: Survival of Syrian Refugee Children in Lebanon,” based on a 10-day “rapid assessment” conducted in Lebanon in November, calls for increased funding from the international community and stronger support from the Lebanese government to combat malnutrition, disease, hypothermia, and exploitation such as sex trafficking, early marriage, and child labor.

The well-being of children, who make up half the refugee population, is tied to that of their families, said Susan Bartels, an FXB fellow, assistant professor of medicine at Harvard Medical School, and physician at Beth Israel Deaconess Medical Center. That means overall improvement in living conditions for refugee families must be the goal.

The refugees in Lebanon are among an estimated 2 million who have fled Syria’s civil war, which will be three years old in March. An estimated 6.5 million Syrians have been displaced internally.

Bartels and Kathleen Hamill, an FXB fellow and adjunct assistant professor at Tufts University, wrote the report after traveling to Lebanon. The two conducted 67 interviews with refugee families, Lebanese government officials, and representatives of nongovernmental aid agencies over their 10-day stay. The 34 refugees they interviewed were staying in the Bekaa Valley, the port city of Tripoli, or the greater Beirut area.

Living conditions varied widely. In Beirut and Tripoli, families tended to be sheltered in existing housing, some faring relatively well in rented apartments, others crowded into marginal settings such as basements, storefronts, and apartments under construction. In the Bekaa Valley, many lived in tent settlements.

Bartels recalled visiting one woman in her tent and sitting on a rug covering the bare ground during the interview. The tent provided some shelter from rain, but it had no heat and provided little protection from the sometimes sub-freezing temperatures. The woman’s clothing, like that of many refugees, was inadequate for the season. The two researchers saw children going barefoot or wearing just sandals, and few warm coats.

“It was already cold at the end of November,” Bartels said. “We were wearing our warmest travel clothes as well as jackets. The Syrians didn’t have many clothes, no jackets. … It was remarkable to be there, for it to already be so cold in November, and to know how much more severe the weather was going to get.”

Both Hamill and Bartels described a warm welcome, despite the refugees’ difficult situation.

“People wanted somebody to document and maybe witness the conditions they were living in,” Hamill said.

Bartels said she was struck by the feeling of isolation expressed by many of those interviewed. The report notes a feeling of abandonment among the refugees and an “unsettled, almost volatile mood.”

Health care and food were in short supply. Food assistance was unequal to the needs of many families, the interviewers found. Cases of malnutrition have not been common among refugee children, but are beginning to be observed as families run out of resources.

The report highlights several concerns specific to those under age 18. As families’ resources are depleted, children beg on the streets or go to work. In addition, early marriage of young girls is cited. While refugees believe these unions will provide the brides with protection and access to the husband’s resources, early marriage can lead to an unequal relationship and may even be a front for sex-trafficking operations, the report says. Girls desperate for resources are not only vulnerable to sex trafficking, but can engage in what the report terms “survival sex” for money.

Even children who avoid the more pernicious forms of exploitation are in danger of losing years of education, as some 80 percent of refugee children are not attending schools, the report says. Because parents are concerned about the safety of their children, they often keep them inside. This exacerbates the family’s profound social isolation, not just from the surrounding Lebanese community, but also from other Syrian refugee families.

Though Lebanon has maintained an open border and new refugees get an initial aid package after registering, many of the difficulties faced by refugee families stem from the Lebanese government’s decision not to allow the construction of refugee camps, Bartels and Hamill said.

A result of the nation’s experience with Palestinian camps, which became permanent settlements, the decision means that Syrian refugees are dispersed to some 1,500 locations around the country. Bartels said the lack of camps has made it extremely difficult for aid agencies to provide assistance and services, such as education and health care. In addition, most refugees are paying rent for even marginal housing and face eviction if they cannot pay.

Bartels and Hamill acknowledged that Lebanon, with a population 4.2 million, has been enormously stressed by the refugee crisis. Syrian refugees represent close to one in four residents in the country, and, at current rates of increase, the refugee population is expected to rise from about 1 million to 1.5 million this year.

The effects within Lebanese communities have included rising rents, steeper competition for jobs, an increase in begging, and a strain on infrastructure such as education and sewage systems.

“It has … placed a large burden on Lebanese communities,” Bartels said. “You have to keep in mind the infrastructure in Lebanon was not great to begin with.”

Recommendations in the report focus on providing basic needs, guarding against exploitation, increasing access to education, and decreasing social isolation. The fulfillment of financial commitments by the international donor community will be key in providing the resources for those actions, the authors note. At a Jan. 15 conference in Kuwait, donor nations pledged some $2.4 billion to help Syrian refugees in all countries. But $6.5 billion is needed this year alone, said U.N. Secretary-General Ban Ki-moon.

The establishment of formal camps would be a major step toward meeting needs, the authors say. Absent such action, they say, durable materials should be provided to reinforce shelters, families should be relocated from dangerous proximity to ravines and stream beds where flooding can occur, and more aid should be directed at meeting food, water, sanitation, and health care needs.

The report suggests encouraging Syrian children to attend local schools by lowering educational expenses and fees, and leveraging the skills of refugee teachers to lead classes, since the influx of Syrian children would necessitate a doubling of the current Lebanese school system.

The report recommends lifting restrictions on employing Syrians, which would allow more adults to work; raising the legal working age to 15; and giving labor inspectors additional power to police violations.

Other recommendations would set a minimum legal age for marriage, implement and enforce laws against sexual exploitation and human trafficking, and ensure that victims are not viewed as criminals.

For the international community, the report urges efforts dedicated to finding a resolution to the Syrian civil war and opening nations outside of Lebanon, including the United States, to refugees.

“There’s got to be an even more intense effort to sort this out,” Hamill said.