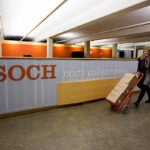 Shadowing the work of nations

Kahneman, an emeritus professor of psychology and public affairs at Princeton University, won the 2002 Nobel Prize in economics for his work on “prospect theory. Developed with his colleague and longtime friend and collaborator Amos Tversky in 1979, the theory asserts that a person’s decision-making process is based on an assessment of perceived risk measured in gains and losses, and that people more often make decisions based on the perceived gains versus the perceived losses.

The work, instrumental in the creation of the field of behavioral economics, is explored in Kahneman’s 2011 book “Thinking, Fast and Slow.” Sunstein was a fitting moderator for the discussion, having co-authored, with economist Richard Thaler, the 2009 book “Nudge: Improving Decisions About Health, Wealth, and Happiness.”

During the talk Kahneman offered his take on how the mind processes information in two distinct ways. “System 1,” he explained, is the brain’s fast, automatic, intuitive approach. “System 2,” he said, refers to the mind’s slower, analytical mode, where reason dominates. But the first often dictates the second.

“The idea is that System 1 is really the one that is the more influential; it is guiding System 2, it is steering System 2 to a very large extent,” Kahneman said.

Later in the conversation, Kahneman expanded on his work and research related to well-being.

“We did research that showed that people’s memories do not correspond to their actual experiences … there is a discrepancy about what actually happens to you over time and how you remember it later.”

While Kahneman said he initially thought that determining “whether people were happy in their life is more important than how happy they are when they think about their life,” he later changed his mind based on an understanding of how people plan for the future.

“In a way, when you think about the future you are maximizing the qualities of your anticipated memories. If this is true, it’s absurd to have a conception of well-being which has nothing to do with what people are actually trying to achieve.”

During a question-and-answer session, one member of the audience wondered if it is premature to use what are sometimes considered “primitive” behavioral findings in shaping public policy. (In recent years, several countries, including the United States, have created behavioral insights teams to help their governments design better policy.)

“We don’t know much, but we know a few things that can be put to use,” Kahneman said.

To open the discussion at Burden Hall, Sunstein asked the 79-year-old scholar about the “start of the work that became so transformative.”

It began when he invited Tversky to give a talk to a psychology seminar he was teaching at Hebrew University in the late 1960s, Kahneman said. Tversky discussed research that suggested people are “good intuitive statisticians.” Kahneman disagreed.

“We debated that, and we found that we liked talking to each other,” said Kahneman. One thing led to another, and soon the two were collaborating, exploring areas such as how people assign probability to events.
Tversky, who died in 1996, was better trained in formal decision theory, and was a clearer thinker. “I brought in a background in the study of vision,” and how perception informs the study of intuition, said Kahneman.
“The fact that we overlapped a lot, but also had distinct areas of strength … meant that we could understand each other quickly. And also, we kept surprising each other.”

Above all, said Kahneman, “the engine of collaboration was that we just enjoyed each other’s company. We were laughing all the time.”

The event’s sponsor was the Behavioral Insights Group, a new initiative of the Kennedy School’s (HKS) Center for Public Leadership aimed at bringing together researchers from across the University to explore how behavioral science can help people and organizations make better decisions.