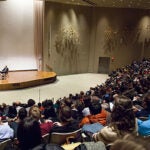 Ryan: ‘Schools don’t know what the rules are — that’s a problem’

Should schools punish students for online speech? That question, posed by Harvard Graduate School of Education (GSE) Dean James Ryan as part of his J-Term seminar, opened the doors to many more. Calling the issue “remarkably difficult” in terms of law and policy, Ryan pushed students to think deeply about issues regarding online speech facing courts and school officials today.

“As you know, social media is pervasive; students communicate all the time online,” Ryan said. “Sometimes students say incredibly nasty things — beyond nasty — they harass, they torture other students through online postings, leading to a new term in our vocabulary: not just bullying, but cyberbullying.”

The dilemma for many school officials is whether to intervene. Whether they do or don’t, schools may face liability — and existing laws may offer them little guidance.

“The law is really unclear. What you won’t get out of this session is a bright-line rule about when schools can intervene or when they have to intervene because unfortunately the law is not yet settled,” Ryan said during a two-hour discussion in which he urged students to move past what the law already says. “The court has not yet issued a definite ruling about the rights of students in this context. The nice thing is it gives us an opportunity to think about what that rule would look like.”

The class delved into cases examining student activity online, ranging from threats of physical harm to images of sexual acts to inappropriate messages about teachers. Through the lens of landmark cases dealing with schools and student speech, such as Tinker v. Des Moines and Bethel v. Fraser, the seminar wrestled with whether and how any of their findings could apply in today’s wired world.

In the end, the students were divided. While some thought a line could be drawn based on place and timing — whether or not an offensive post was made during school hours, and from a computer on campus — others struggled with whether it mattered where the online speech originated, especially if it had potential to harm the school, staff, or students. “It’s always foreseeable that online speech could end up on campus,” Ryan reminded the class. Similar questions arose regarding the content of online speech. How is harm determined? If educators become monitors of speech, does that violate students’ First Amendment rights?

“You see the problem, right? Schools don’t know what the rules are — that’s a problem,” Ryan said. “If you act, you might get sued. But it’s a problem if you don’t act and harm occurs, because you might get sued. So, what school officials would like most of all is clarity, and right now there is no clarity because the court has not spoken about what the rules should be.”

While states have begun to set their own rules, in particular about cyberbullying, Ryan noted there was still time for school boards and courts to weigh in. The issue of online speech isn’t one that is likely to go away until it is decided by a higher court, which Ryan anticipates within the next five years.