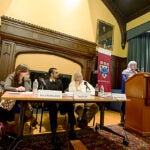 How regimes leverage the global, siren reach of sports

Whether reveling in the opening ceremony, cheering figure skaters from the stands during a team competition, or directing a massive army of police and military personnel to guard against a whiff of terrorism in the region, Russian President Vladimir Putin has been an oddly ubiquitous, hands-on host during the 2014 Olympic Games in Sochi.

At a reported cost of nearly $50 billion, the Sochi games are widely believed to be the most expensive ever, seven times the cost of the 2010 Winter Games in Vancouver, Canada. It’s a staggering investment by the Russian state, one that suggests, along with Putin’s constant, watchful presence at the Games, that the Kremlin hopes to recoup by leveraging the Olympics as a global rebranding opportunity for the country. Given the warm, golden glow cast on host countries during the two weeks of competition, not to mention the billions of eyes watching, it’s not hard to see why Putin would find the marketing potential of the Olympics so intoxicating and also want to seize the moment to burnish his own image as a rugged outdoorsman.

A veteran print and radio journalist, Shulman spoke Tuesday at the Carr Center for Human Rights Policy at Harvard Kennedy School about how political regimes of all stripes have historically used sports as grand stages to market and push their ideologies and agendas.

From Hitler’s attempt to exploit the 1936 Summer Olympics to consolidate his growing power and bolster his claim of Aryan superiority, as documented in Leni Riefenstahl’s film “Die Gotter des Stadions”; to Jackie Robinson’s integration of Major League Baseball in 1947, which laid the groundwork for the public’s eventual acceptance of desegregation; to President Richard M. Nixon’s historic talks with China following friendly relations between the United States and Chinese national pingpong teams in the early 1970s, sports have been instrumental not only in promoting political values and policies, but in bringing wide attention to global issues and galvanizing change, often more effectively than traditional protests and polemics.

A former soccer reporter in Italy for the Associated Press, Shulman is a contributor to NPR’s “Only a Game” and executive producer and host of “Away Games,” a television and Web series in development for PBS. The show tells stories about initiatives from around the world that use sports to raise awareness and precipitate some solutions to an array of human-rights issues.

Soccer and cricket are followed by billions of people around the world who share no common language, no common history or culture, and often hold opposing political views. Yet they come together and bond over their love of the game, Shulman said.

“Sport has a communicative power even among uneducated people. What we’re trying to do with ‘Away Games’ and what I urge human-rights practitioners is to use this universal power of sport for something more important than selling Coca-Cola,” he said.

During the wave of political uprisings known as the Arab Spring that started in late 2010, one of the first organized groups to occupy Tahrir Square in Cairo consisted of militant fans of the Al-Ahly soccer club, a team started by Egyptian nationalists in 1907.

“In dictatorial regimes, particularly in the Muslim world, there are two places where large groups of people can legally assemble. One is the mosque; the other is the stadium. In South Africa during apartheid, the only place where black South Africans could gather and talk politics, albeit surreptitiously, was at the soccer stadium. Same thing in Egypt,” Shulman said.

Despite frequent calls by various groups to harness the extraordinary reach of worldwide athletic events by objecting to political actions or stances taken by leaders or sporting bodies through boycotts, such actions have done little historically to effect immediate and meaningful change, said Shulman.

The Russian laws against homosexuality that led to widespread snubbing of the Olympics in Sochi by many world leaders are but one of many state-sponsored practices and human-rights violations that, while clearly objectionable, won’t be undone by athletes skipping competitions, Shulman said.

“Discrimination in Russia is not limited to homosexuals; it is broad-spread, both institutionalized and popular. There are things you would see in the newspapers, there are things you would see on the streets that would be taken down and people would go to jail for here. Putin is trying to dress that up. That gesture he made to embrace the [Dutch] speed skater, he did that because he knew he had to. But they have not changed the laws,” Shulman said.

“Almost every country that hosts these major events has something in the closet — if not in the closet, they have some sin right out front. Beijing’s human-rights offenses dwarf Russia’s, [yet] we didn’t have half the protests” during the 2008 Summer Olympics. “If we’re really going to limit these major events to countries that don’t have egregious human-rights violations, I can think of a handful of countries” that would qualify, he said.

Shulman, who tutors high school students at Cambridge Rindge and Latin, said he has seen firsthand how sports can provide an opening to learn and talk about difficult subjects that students and others might otherwise not pay attention to. In addition to airing stories, “Away Games” is developing curricula and learning modules to help foster broader and deeper engagement in the issues the show presents.

“One of my great qualms about doing these stories, as a radio reporter and a print reporter, is … they’re very easy stories to do because the injustice is so glaring,” Shulman said. “You make a big splash, and then nothing happens. I’m very excited about developing this educational program because I think we can have a much bigger and more measurable impact than just calling attention to the disasters and distresses of the lives we’re featuring.”